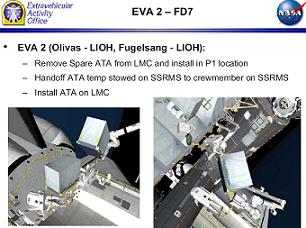 STS-128 has successfully completed the second of three spacewalks, which focused on the replacement of an Ammonia Tank on the International Space Station (ISS). Meanwhile the Damage Assessment Team (DAT) have given an expansive roundup of their rationale to clear Discovery for entry, which was approved by the Mission Management Team (MMT).

With a delayed egress from the Station’s Quest Airlock – due to the requirement to break Olivas’ configuration to replace a chin strap – the duo first “prepositioned” a bag for EVA-3 to the outside of the ISS before translating to Discovery’s Payload Bay where they removed the new ATA from the Lightweight Multipurpose Carrier.

The ATA was then installed onto the P1 truss well ahead of schedule, thanks to the smooth transition through the tasks.

Ammonia and Nitrogen coolant lines were then be attached to the new ATA, completing the first half of the EVA around 50 minutes ahead of the pre-planned schedule.

Olivas and Fuglesang then translated back to Discovery’s Payload where they berthed the spent ATA tank (which was removed during EVA-1) to the Lightweight Multipurpose Carrier for return to Earth.

Due to the advanced made on the timline, a couple of get-ahead tasks were completed – including protective covers and foot restraints – prior to Fuglesang and Olivas translating back to the Quest Airlock and ingress the Station.

Following EVA-1 on Tuesday, Mission Controllers compiled an “items of interest” list. The listed included the failed CO2 sensor in Nicole Stott’s suit, the MMOD (Micro Meteoroid Orbital Debris) strikes on the Starboard Z1 truss toolbox, the loss of the TDRS 275 (Tracking and Data Relay Satellite 275) signal because of rain at the communications station in Guam, and fraying on Danny Olivas’ gloves.

This fraying, while not a preexisting condition, is understood and the gloves have been cleared for use on the remainder of the mission’s EVAs via a Mission Management Team discussion on FD-6 (Flight Day 6).

Furthermore, all metabolic rates for Nicole Stott and Danny Olivas were normal and the CO2 removal hardware in the spacesuits performed as expected.

Overall, Discovery continues to enjoy a relatively issue free mission at the ISS.

Current cryo margins (propellant margins) show that Mission Controllers and Discovery’s crew have 2-days and 11-minutes of additional cryo above the 13+1+2 day baseline with the SSPTS (Station to Shuttle Power Transfer System) and 1-day 4-hours of additional cryo without SSPTS.

Furthermore, the Mission Evaluation Room (MER) is tracking no new significant In-Flight Anomalies and only three new “funnies” — which are not a constraint to the continuation of Discovery’s mission.

The only new “funny” to receive more than a one line treatment in the status report was the Fuel Cell KOH level.

The current Flight Rule protects for a 24 percent KOH limit with a 5 percent margin of error for possible instrumentation problems.

Furthermore, engineers on the ground continue to evaluate the VRCS (Vernier Reaction Control System) following the system’s deactivation on FD-2.

Currently, the team is reviewing the possibility of repressurizing the system’s manifold 5 in the event that a contingency necessitating the use of the VRCS arises.

“The team continues to review the history of testing and understanding changes proposed to SODB/FR and will provide a CHIT to document the use of the VRCS only as a contingency with risk associated to repressing manifold 5,” added the Mission Management Team meeting minutes on L2.

Currently, it is believed that the temperature in manifold 5 reached -35 degrees F. This low temperature has given engineers concern that the oxidizer might have frozen.

As such, the engineering team is reviewing the possibility of a “staged repress procedure that the Mission Operations Directorate (MOD) has in draft form as a means to recover the F5R Vernier thruster if a contingency requires.”

As reported on Wednesday, five days of extensive review led to the Damage Assessment Team (DAT) officially clearing Discovery’s Thermal Protection System (TPS) for reentry. Their findings have been presented in a series of presentations to the MMT – all available on L2. 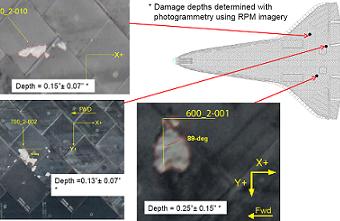 “TPS acceptable for entry – finished all ascent imagery and analysis and have no concerns for TPS during entry,” notes the minutes from yesterday’s Mission Management Team meeting.

Via the FD-2 Orbiter Boom Sensor System (OBSS) scans, digital photography by the crew, and the R-bar Pitch Maneuver (RPM) just prior to docking on FD-3, all areas of Discovery’s TPS were scanned or photographed.

The External Tank doors were verified to be completely closed with no paint stripe visible via RPM photography.

In all, Discovery is one of the cleanest — if not the cleanest — Orbiters to arrive at the ISS since Shuttle flights resumed in July 2005 following the Columbia accident.

Only 13 areas of Discovery’s TPS were noted to be different from their pre-launch, baseline configuration. 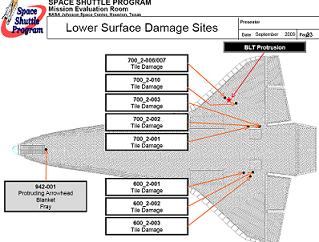 Of the nine lower surface damage locations, eight were noted as tile damages and one as a frayed/protruding arrowhead blanket.

This frayed/protruding blanket — as with the rest of the eight tile damage sites on the underside of Discovery — will have no effect on the Boundary Layer Transition Detailed Test Objective which will be carried out during Discovery’s reentry into Earth’s atmosphere.

These locations were “assessed with depths provided by photogrammetry. All tile/structure margins maintained,” notes the latest DAT presentation.

Likewise the two protruding gap fillers on the Starboard OMS Pod remain bonded to the underlying surface of Discovery.

All tile and structural margins are maintained here as well and the gap fillers are not expected to liberate during reentry because ascent loads are three times higher than those of entry loads on this area of the vehicle. 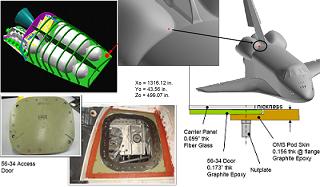 The final area of interest on the TPS is a FRSI (Felt Reusable Surface Insulation) plug on the Starboard OMS pod. This felt plug was noted to be protruding in relation to its usual configuration.

“FRSI plug retained in insert and liberation not expected as 1″ of the plug remains in the insert,” notes the DAT presentation and Mission Management Team meeting minutes.

However, should the felt plug liberate during entry, no damage to the OMS pod structure or critical damage to the Rudder Speed Brake is expected should the plug impact those areas during liberation.

As such, the DAT team was unanimous in declaring Discovery’s TPS “acceptable for entry.” To be followed by the Late Inspections after undocking.