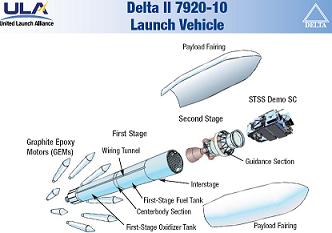 The Space Tracking and Surveillance System, or STSS, is a programme which was originally proposed in the 1980s by the Strategic Defense Initiative Organization. Originally known as the Space Surveillance and Tracking System, it was envisioned as a system to track ballistic missiles from Low Earth orbit.

It grew into a programme named Brilliant Eyes, which later became the SBIRS-Low component of the US Air Force’s Space-Based Infrared System. In 2002 the Missile Defense Agency took over the programme, and it became known as STSS.

The two satellites were built by Northrop Grumman, with their sensors being produced by Raytheon. They have a combined mass of 2,244 kilograms, and are attached to each other, with the lower satellite, SV-2, being attached to a component designated as an “Orbital Insertion Stage”, which will function as a Payload Attachment Fitting.

Wednesday’s launch will use the Delta II 7920-10C configuration. At launch the first stage, an Extra-Extended Long Tank Thor, will augmented by nine GEM 40 solid rocket motors. Once the first stage has completed its burn, the second stage, a Delta-K, will ignite to complete the ascent and place the satellites into orbit.

For the first few minutes of the flight, the satellites will be encapsulated in a 3-metre (10-foot) diameter composite payload faring.

Around two seconds before launch, the RS-27A main engine of the first stage will ignite, along with two smaller vernier engines which will provide roll control for the rocket. At liftoff, six of the solid rocket motors will also light, and the rocket will begin its ascent. It will pass Mach 1, the speed of sound, just over thirty two seconds after launch. Forty seven seconds into the flight, the rocket will pass through max-Q, when it will be subjected to maximum dynamic pressure.

Around thirty seconds after beginning the dog-leg, the rocket will manoeuvre again to provide zero angle of attack during separation of the air-lit solid rocket motors. The motors will burn out around 129 seconds after launch, and separate two and a half seconds later, after which the rocket will begin its second dog-leg manoeuvre, which will last eighteen seconds.

Around four minutes and twenty three seconds after launch, the RS-27A will shutdown, having depleted propellent in the first stage. The vernier engines will cutoff a few seconds later. Staging will occur eight seconds after main engine cutoff, and will be followed by second stage ignition five and a half seconds later. The second stage will be powered by an AJ-10-118K engine, which will perform four burns, two before and two after spacecraft separation. 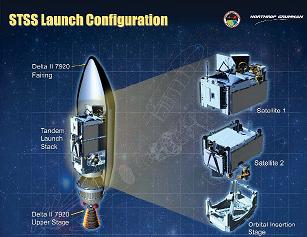 The payload fairing will separate from the rocket four seconds after second stage ignition. Two seconds later, the rocket will begin the third and final dog-leg, which will last ten seconds. Ten minutes and thirty two seconds into the launch, the second stage engine will shut down having completed its first burn, which will result in a parking orbit with a perigee of around 185 kilometres, an apogee of around 1,537 kilometres, and 54.6 degrees of inclination.

Forty two and a half minutes after launch, the second stage will restart for its second burn, which will last sixty seven seconds. Four minutes and twelve seconds after completion of the burn, the STSS-Demo SV-1 spacecraft will separate. Following a series of reorientation manoeuvres, the SV-2 spacecraft will separate seven minutes and twenty five seconds later. The satellites should separate into a circular orbit at an altitude of 1350 kilometres, inclined at 58 degrees.

Following spacecraft separation, the second stage will perform an evasive burn, and a depletion burn. The five second evasive burn will begin 108 minutes and 20 seconds after launch. Six minutes and forty seconds later, it will restart again for the depletion burn. This is expected to last around twenty six seconds, and will use excess fuel in the stage to minimise risks of it causing an explosion in orbit.

Wednesday’s launch is the 145th flight of the Delta II, and marks the last US military payload on the Delta II manifest, however the launch is being conducted under a contract with NASA rather than directly through the US military. The Delta II is currently scheduled to make its next flight on 6 October, with the WorldView-2 commercial imaging satellite. The next Delta II launch from Cape Canaveral will be in 2011, with the GRAIL mission to the Moon.