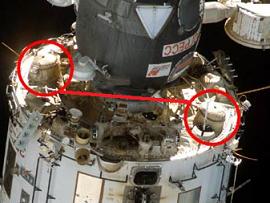 Soyuz Commander Max Suraev, NASA Flight Engineer Jeff Williams and spaceflight participant Guy Laliberte launched aboard the Soyuz TMA-16 spacecraft from the Baikonur Cosmodrome in Kazakhstan at 2:14 am (Central). Meanwhile, NASA controllers have been looking into Soyuz “Safe Haven” procedures, in the event of late conjunction threats to the Station.

The Soyuz Vehicle consists of three modules: the Orbital Module, the Descent Module (DM), and the Instrumentation/Propulsion Module (IPM). The DM is the only module that returns to Earth, after all three modules nominally separate simultaneously, shortly after the deorbit burn is completed.

For the journey uphill, the vehicle will endure a two-day trip, ahead of docking to the Station at 3:36 am Central on Friday.

After Padalka and Barratt depart the station, De Winne will become commander of the next station mission, designated Expedition 21.

Padalka, Barratt and Laliberte will return to Earth at approximately 11:29 pm on Saturday, October 10, in the Soyuz TMA-14 spacecraft that is currently docked to the station. Padalka and Barratt have been aboard the orbiting laboratory since March 2009.

The Soyuz vehicle also provides the role of a lifeboat when attached to the ISS, allowing the crewmembers their only permanent means of escape from the Station in the event of a serious problem. One such threat is MMOD (Micrometeoroid Orbital Debris), which have the ability to puncture the pressurized modules.

Thankfully, tracking on the ground allows the Station a heads up of MMOD threats of the size that can cause damage on impact, allowing for what is called the DAM (Debris Avoidance Maneuver) to be conducted by the thrusters on the Russian segment, with attitude control via the four Control Moment Gyroscopes (CMGs).

DAMs are not uncommon, but only take place after computational models – refined in the days leading up to the event – show the debris will make its TCA (Time Of Closest) approach within a set threat distance.

However, if a debris threat is identified too late, a DAM would not be able to be conducted in time. Such an incident has occurred twice in the last six years or so.

“On 6 April 2003 and 13 March 2009 potential conjunctions were identified too late to perform a Debris Avoidance Maneuver (DAM),” opened a MOD (Mission Operations Directive) presentation – available on L2 – on the subject. Both threats passed by the Station without incident.

Per Flight Rule B4-101, this “late conjunction” threat results in the crew being ordered to enter the Soyuz vehicle before TCA breaches the 10 minute mark, and prepare to depart the Station if the debris threat realizes itself into an impact and causes a breach of the life support environment.

The March 13, 2009 event was a good example of a “RED Late Conjunction” threat – with NASA’s Expedition 18 Commander Mike Fincke, Russian Flight Engineer Yury Lonchakov, and NASA’s Sandra Magnus were asked to ‘evacuate’ into the docked Soyuz, as the ‘25090 PAM-D’ debris closed in on the Station.

The threat – which was a ‘yo weight’, originally part of a Delta PAM-D stage used to launch GPS 37 in 1993 – passed by the Station without making an impact, allowing for the crew to re-enter the ISS and re-open the hatches to the modules.

Commander Fincke had closed all the doors between the modules on Station ahead of ingressing the Soyuz.

However, the MOD presentation calls for a greater understanding on the procedures between themselves in Houston, and their counterparts in Moscow – based on the lesson’s learned from the March event. 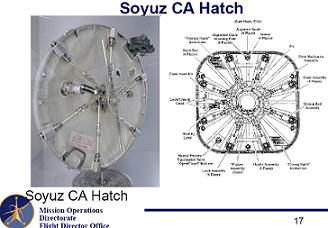 Specifically, it is noted that Moscow controllers had recommended to be “prepared” to close the hatch between Soyuz and Station during the threat, while Houston controllers requested that the crewmembers should actually close the hatch.

“The actions were discussed Real-time; MCC-H (Houston) recommended closing the Soyuz hatch and MCC-M (Moscow) decided to stick with the agreed to flight rule (prepare to close the hatch). NASA subsequently went off to review our response to determine the best course of action for future events,” added the presentation.

Following two preliminary meetings, the Russians agreed with the NASA recommendations in the event of another late RED conjunction threat to the Station.

Expanding on the threat of MMOD hitting the Station, the presentation continues by outlining why crew safety – in the event of a late conjunction situation – is paramount. 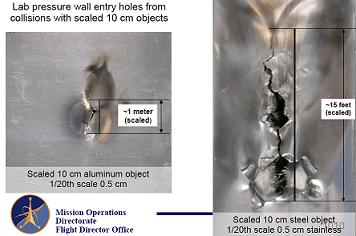 “Space Command (STRATCOM) tracks particles at minimum 10cm in size. A 10cm piece of debris would create, at minimum, a 20cm hole in the ISS pressure shell. May also result in 2 penetration points (one in, one out). A 10cm penetration causes damage that exceeds module critical crack limit and will result in catastrophic loss of that module.”

Being able to evac to the Soyuz and be ready to depart is a critical time factor, especially if the ISS modules were depressurizing before the hatches between the Soyuz and the ISS were closed.

“Assuming crew will be capable of taking action, documents note the Soyuz will take approximately 5 minutes to isolate, which is already longer than the 3 minutes to reach vacuum.”

Charts in the presentation show a number of scenarios resulting from an impact.

Firstly, if a debris strike breaches the module wall, the crew would die if they were either in the ISS, or even in the Soyuz – without the hatch being closed. If they were inside the Soyuz, with the hatch closed, and the debris impacted the ISS, they have a chance of survival and escape.

It was also noted that “the pressure wave from the debris impact has the capability to move the Soyuz hatch off it seals before the pressure drop on the other side sucks it closed. It is unknown without detailed analysis if the hatch will be dislodged off of its seals or damage the hatch.”

Based on the opening meetings with their Russian counterparts, MOD came to the conclusion that the Soyuz hatch could be closed “within a minute” in an emergency scenario. MOD also questioned if the shockwave threat on the hatch seals is actually a real issue.

Although morbid, the fate the crew would suffer as the Station started to decompress around them was outlined by the US Navy & Marine Corps Public Health Center, Aerospace Medicine Literature – which was included in the presentation.

As the Atmospheric Pressure starts to drop, the crew begin to suffer from “some adverse physiological effects, but they are unnoticeable.” This is followed by “Impaired thinking and attention. Reduced coordination.”

Thankfully, the ability to track the vast majority of debris threats, along with the aforementioned refinement of procedures, means the actual risk to the crew is extremely small.