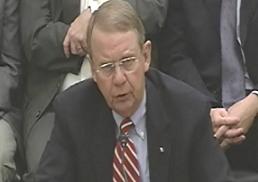 Space Shuttle Program (SSP) manager John Shannon has claimed that Aerospace Safety Advisory Panel (ASAP) leader Admiral Joseph W. Dyer’s opposition to an extension of the shuttle manifest, due to it “becoming more risky”, is not an accurate reflection of the program’s current environment. This led to Mr Shannon addressing his workforce to inform them he found the Admiral’s comments “disturbing”.

Although additional funding is the key driver for extension to become a reality, the question of how much “risk” would be involved with additional flights in the shuttle manifest has been the subject of debate since former NASA administrator Mike Griffin made claims that there was a 1 in 8 chance of a LOV/C (Loss Of Vehicle/Crew) if the fleet flew past 2010.

“The ASAP does not, I’ll emphasize that, does not support extending the shuttle beyond its current manifest,” noted Admiral Dyer in his opening remarks to the House hearing to discuss the initial findings of the Augustine Review into the forward path for Human Space Flight.

That comment was specific to safety, as cited in the Admiral’s opening statement, which gained the opening question from Mr Bart Gordon, a Democrat representative from Tennessee – who chaired the hearing.

“In your comments, you made a very definitive statement concerning no extension of the shuttle,” Mr Gordon asked. “Now is that period, or is that or is that in context to 2020 (likely 2015), and would you extend it if it was recertified, or if there was a mission – or two missions – that came up in the next short period that seemed to be very important? Is there still a period where you wouldn’t go one more?”

“Three quick comments: The thing that scares us the most is that kind of serial extension,” responded Admiral Dyer. “Point number 2: We take this position because we think the risk is more than what we should ask folks to shoulder – and we don’t think there is full transparency to that risk.

“Thirdly, the time to extend the shuttle in the panel’s opinion was several years ago when the supply chain was still intact and when there was an opportunity to go forward with a (inaudible) program. A number of folks, who participated on the (ASAP) panel, have lived through an extension of number of Department of Defense aircraft programs after they were supposed to terminate. It is never a good experience.

“I will also offer one other caution. Could you, with significant money and with recertification, extend the shuttle? Yes. The money would be impressive, it would have to go well through the supply chain, and the risk of finding things that demand even more resources during recertification is a real risk.”

With the heavy tone on the risk, and with six shuttle missions still to be launched, Mr Gordon asked if NASA should be looking at one less flight – if the risk was as bad as the ASAP was portraying. That led to an astonishing claim from Admiral Dyer.

“We say in the military world that the operational commander always has the authority to proceed in the face of absolute requirements – and it would be an equivalent position in the opinion of the panel. The shuttle is risky, it is becoming more so, and extension beyond what is planned through the current manifest we believe would be unwise.”

The remark that the shuttle is becoming “more riskier” drew anger from throughout the shuttle program, not least due to the fact that major steps forward – via numerous safety modifications – that have been proved via a run of highly successful and “clean” missions since Return To Flight.

The recently landed STS-128 mission is already being classed as the cleanest flight – from a Thermal Protection System (TPS) standpoint – in the history of the program.

Such as been the anger – or more so astonishment – at the Admirals remarks, even Mr Shannon decided to add remarks to the latest Shuttle Standup/Integration report (available on L2) to give his position to the SSP team, made in his usual calm and professional manner.

“There were some disturbing remarks from the head of the Aerospace Safety Advisory Panel (ASAP). We are working to understand these concerns from a Shuttle risk standpoint,” Mr Shannon noted. “We are flying safer now, and have a better safety culture and integrated team approach with many checks and balances to ensure that we are flying as safely as absolutely possible.”

Mr Shannon also cited the recent Flight Readiness Review (FRR) and Mission Management Team (MMT) decisions not to launch a mission until they were absolutely sure the shuttle was safe to carry it out. 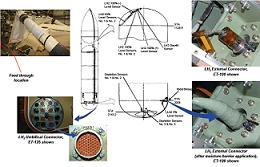 These decisions are well documented, from the continuous External Tank foam modifications from STS-114 onwards, to the Engine Cut Off (ECO) sensor/LH2 Feedthrough connector issues surrounding STS-122, to the extensive Flow Control Valve (FCV) discussions, to the GUCP (Ground Umbilical Carrier Plate) misalignment, and right through to STS-128’s LH2 Fill and Drain Valve indications – to name but a few.

Also, as noted by Mr Shannon as safety culture, internal memos have shown major efforts to welcome dissent from throughout the shuttle engineering team, even when such dissent was proven to be unfounded. A “no stone left unturned” attitude was how one source described the current culture to this site.

Each time a problem has been noted, it has been proven that managers have stepped back, listened to the engineering community, before making absolutely sure they both understand the problem and are in a comfortable position to launch.

“We have demonstrated over the last several flows that when we are not ready to fly, we stop and take the necessary time to understand the situation before we proceed,” added Mr Shannon, who added he wasn’t even sure if Admiral Dyer was speaking of the current program, given how alien his representations were to the reality of the program since Columbia.

“(I am) extremely proud of how the team has worked through recent problems. (I am) not sure if the concerns of the ASAP chairman were echoes of the past, but they do not accurately reflect the current environment. We will work to understand these comments and to be sure that we have not forgotten anything.”

The reality of the actual risk – a risk that is obvious and never underestimated throughout manned space flight – was shown in the extension study report that NASA filed with the White House back in May of this year.

Those findings revealed a 98.7 percent probability of safely executing each flight, which painted a very different picture when compared to Mr Griffin’s alarming 1 in 8 chance of a disaster.

“The latest Space Shuttle probabilistic risk assessment (PRA) indicates that the single mission risk for loss of crew and vehicle (LOCV) is 1 in 77; stated another way, there is a 98.7 percent probability of safely executing each flight,” noted the NASA study into extending the shuttle past 2010 (available on L2).

Interestingly, that study based its figures on the SSP since 1987. Had the study was based on post Return To Flight findings, it would be highly likely resulted in a risk ratio would be significantly lower – simply due to the flight history since the loss of Columbia, and the numerous modifications made since the fleet returned to action with STS-114.

However, even based on the conservative study findings, the risk is not deemed to a ratio that would increase, which directly counters the Admiral’s claims.

“The average risk of LOCV has remained fairly consistent over that time. This risk is predicted to remain consistent over the remaining life of the program. The primary drivers for LOCV are, in order of the magnitude of their contribution to the overall risk: micro-meteoroid/orbital debris (MMOD), ascent debris, and Space Shuttle Main Engine (SSME) malfunctions.

“In addition, NASA will continue to evolve its PRA tools to address anomalies encountered during flight operations. By monitoring anomaly trends across different categories (for example, by whether an anomaly is due to design issues, age, operations or procedurally-induced effects, or unknown or random phenomena), NASA gains both near-term insights into Space Shuttle performance opportunities for potential safety improvements during ongoing operations as well as longer-term benefit in applying experience-based risk models to future programs like Constellation.

“NASA’s safety and mission assurance strategy emphasizes the need for rigorous program and independent safety reviews, as well as continual safety improvements throughout a program’s life cycle. Improvements to both processes and hardware are made for each Space Shuttle flight, and NASA will continue to invest in prudent safety enhancements through the last mission.”

The latest SSP Top Risks Review presentation on L2 shows the vehicle is becoming safer, with the latest ratio updated to 1 in 81 LOV/C, from the previous 1 in 77.

The SSP also earned praise at the preceding meeting with the Senate side of Hearing from both the politicians in attendance and Mr Norm Augustine himself – who spoke of his “astonishment” at the morale and professionalism of the program’s workforce.

Such comments are a good reflection of the highly respected SSP team. However, the continued uncertainty surrounding the future of both the Shuttle Program and NASA itself is understandably starting to pay a toll, as the program is forced to press ahead of a cull of its workforce based on the current plan to end the program after STS-133.

A forward plan is expected next month – right at the cusp of a point of no return for the Shuttle Program’s extension potential. That point of a soon-to-be-known “executable plan” was also referenced by Mr Shannon.

“Testimony from the Augustine Committee has been delivered to the House and Senate, but everyone must keep in mind that this is the starting point of the discussion on NASA’s future.

“The House disagreed with some of the findings, and the Senate disagreed with other findings. These points will be worked out before it is submitted to the White House. When we come out of this process, we will have an executable plan.”