STS-128: High praise for ISS visit as Discovery is checked out for entry

Discovery is hoping she’s spending her final full day in space, with a targeted return to the Kennedy Space Center (KSC) on Thursday. As part of the entry preparations, the main systems required for the return home have been checked out on Flight Day 13, with no issues found. Discovery’s Thermal Protection System (TPS) is also classed as in excellent condition for re-entry.

End Of Mission minus one day (EOM-1) involved the checkout of Discovery’s systems for her return to Earth, including the Reaction Control System (RCS) jets – Primary Thruster only – and aerosurfaces.

The Flight Control Surfaces (FCS) checkout is a vital element of ensuring Discovery can conduct the DAP (Digital Auto Pilot) stage of re-entry – as she changes from a spaceship into an aircraft.

The RCS will also be involved for the first part of re-entry, helping Discovery to control her attitude and positioning before and after deorbit burn, and also through entry-interface.

Those propellant margins are deemed as acceptable for up to an EOM+3 (End of Mission plus three days). KSC will be the only landing site open for Discovery on Thursday, with Friday currently undecided, and Saturday being classed as the “pick em” day where Edwards Air Force Base in California, and possibly White Sands in New Mexico are available.

“The mission is proceeding nominally and per the timeline. Landing is scheduled for Thursday, September 10th at 1906L at KSC. Flight Day 12 Activities completed: Orbiter undocking from the ISS. ISS Fly Around and final separation. Late TPS inspection,” noted mission latest on L2.

All of the checkouts were deemed successful during Flight Day 13’s tests, while the Damage Assessment Team (DAT) have already given initial clearance of Discovery’s TPS – per Late Inspections, with only a handful of items to be put through the usual peer review.

The latest update also noted that only one new item of interest has been added to the Mission Evaluation Room (MER) list of problems, relating to a slight issue with Tuesday’s highly successful “No VERN (no vernier thruster availability)” undocking.

Despite the additional challenges associated with the vernier thrusters, STS-128 achieved all of its major objectives during the docked phase with the International Space Station (ISS). This earned high praise from the Mission Operations Directive (MOD).

“The big news this week is mission 17A (STS-128). The ISS and Shuttle teams have been working hard to meet the major Program objectives for this mission and have dealt with a number of issues,” noted the latest 8th Floor News this week (L2).

“The primary goals of attaching the MPLM and transferring all the critical cargo were successful, along with the R&R of the ammonia tank assembly. Early in the flight, there was a propellant leak in one of the Shuttle vernier (lower thrust) thrusters. Therefore, the maneuver from the Shuttle forward +XVV attitude to the Shuttle aft -XVV ISS attitude was conducted using the Russian thrusters.

“Generally, this was a combination of using the ISS Control Moment Gyroscopes primarily with some Russian thruster assist as required along with backup plans to use the Shuttle Primary Thrusters if necessary. The team did a great job finding a shuttle Primary thruster configuration that met all of the loads and contamination constraints.” 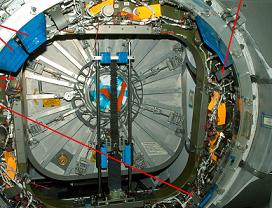 As noted in Mission Management Team (MMT) documentation, a bolt (4-1) on the Common Berting Mechanism (CBM) proved to be troublesome and required replacement on Flight Day 9.

“Bolt 4-1 current profile higher than nominal: During MPLM installation, bolt 4-1 showed higher than nominal, but within spec, torque profile during driving, which could indicate binding issues between the bolt and the nut (MPLM side). Mating was fully successful (16 of 16 bolts met mating criteria). Bolt retraction attempt overnight FD6 failed; bolt remains engaged,” noted the MMT ‘item of interest’ on L2.

While this was one of the minor items, it gained a reference in the MOD 8th Floor review of the docked phase of the mission.

“The team noted a second occurrence of high running torque on one of the 16 Common Berthing Mechanism (CBM) bolts which were used on the Node 2 nadir port to firmly hold the MPLM to the ISS against the force of internal atmospheric pressure.

“Since the MPLM passive side nut was inspected at KSC after the first occurrence of high running torque, the team suspected that the bolt drive assembly on the ISS port may be at fault.

“As a precaution, and to make sure that there were no issues late in the mission attempting to unbolt the MPLM, the flight control team opted to back out the recalcitrant bolt (only 14 are required to hold pressure), and discovered that the bolt jammed before being completely removed.

“Therefore, the bolt was replaced with a spare on orbit which checked out just fine. This is the same berthing port that will be used for the HTV which should be launching later this week.”

All of the items of interest will make the IFA (In Flight Anomaly) Review, with departments already collating their findings for the overview at an upcoming Program Requirements Control Board (PRCB) meeting.

So far, only the F5R thruster issue and the Node 3 configuration issue items have highlighted the MMT overviews, thanks mainly to the lack of any other issues – although sources claim the Right Hand (RH) Solid Rocket Booster (SRB) will make up a large part of the IFA review due to a failed main parachute during its return to Earth.

A failure of one of the three main parachutes has occurred before – resulting in the scrapping of it damaged Aft Skirt – although the failure mode will have to be investigated ahead of STS-129’s launch in November.

Initial reports claim the failed parachute ripped “end-to-end” – resulting in the expended booster hitting the Atlantic Ocean at around 17G. Both boosters are currently being evaluated on dock at the Cape.