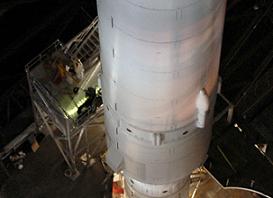 After months and months of delays, Ares I-X is finally pushing towards a firm launch date – October 27 – despite a couple of issues that had to be resolved during VAB processing.

The weekend saw the completion of testing on the Developmental Flight Instrumentation (DFI) that will flow data back to engineers on the ground, as the vehicle conducts its test flight that will involve a two minute powered phase.

Although only the first stage of the vehicle has any life to it, a number of tests and reviews are required to allow the green light for launch. The Launch Vehicle Readiness Test (LVRT) pre-test briefing and engineer walk downs were completed this week, while engineers conducted the final nozzle positioning on the vehicle.

“Launch Vehicle Readiness Testing was successfully completed. This test ran the vehicle through a series of simulated launch events to ensure all systems operate properly before rolling out to the launch pad,” added Ares I-X processing notes on L2.

The recent flow also required work on “Upper Stage Simulator flange and bolt issues” – though no specifics on the exact issue have been mentioned on any processing reports.

“The team is in the process of replacing the 33 bolts on US-7 with new hardware and spherical washers,” noted the opening report of the issue. “Will meet to make a decision on whether an additional 49 bolts will need to be replaced.”

With the decision taken to replace the additional bolts, engineers took just a few days to complete the work on all 78 bolts in question on the Upper Stage. “24 hour retorque was completed on 78 Upper Stage Simulator replacement bolts,” confirmed Wednesday processing information.

Meanwhile, managers are pushing through their series of reviews ahead of launch, reviews that will continue all the way through to four days prior to lift-off.

“MOD personnel will also be validating the Day of Launch structural loads produced by the 1-X team in Hangar AE at KSC. MOD will pass that validation to Hangar AE as part of the Go for Launch. The Level 2 FTRR is scheduled for 10-17, followed by the Level 1 FTRR on 10-23. Ares 1-X is currently scheduled to launch on 10-27.”

The Ares I-X Flight Test Vehicle is the first major flight test of hardware related to the Ares I Crew Launch Vehicle (CLV). Although it is based on a four segment first stage – as opposed to Ares I’s five segment booster – “areas of comparison” will be tested during I-X’s short flight off Pad 39B.

Ares I – providing the program isn’t cancelled via the options presented by the Augustine Review into NASA’s Human Space Flight program – is currently the launch vehicle of choice to carry the Orion Crew Exploration Vehicle.

One of the key criticisms levelled on the current “Program of Record” with Ares and Orion is the funding shortfall and subsequent delays in its near and long term schedule, a situation that both fails to support the current timeline for the International Space Station (ISS), and threatens to move the return to the moon several years past the current 2019 target.

The Augustine Review findings also provide a negative outlook on CxP’s Architecture for what NASA will do once they return to the moon, citing – as CxP themselves have admitted – the lack of a Lunar Base being viable in the current plan. 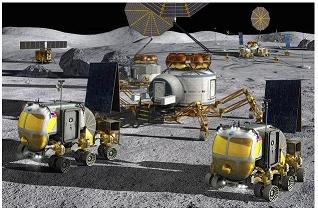 However, just this week, CxP updated status with news of the recent Lunar Architecture Workshop on MOD’s 8th Floor News memo, ironically surrounded by a graphic of a Lunar Base of operations – whilst announcing a Human Lunar Return (HLR) Systems Requirements Review (SRR) will be held just under a year’s time.

“Lunar Architecture Workshop: The Constellation Program Systems Engineering and Integration Office, conducted a three day workshop, September 28-30, with all of the Constellation Projects. The objective of the meeting was to review the state of the current lunar architecture.

“Each Project (Orion, Altair, Ares V, EVA, GO and MO) provided their progress since the Lunar Capability Concept Review (LCCR), specific issues (including both threats and opportunities) and their assessment of the current plan to hold the Human Lunar Return (HLR) Systems Requirements Review (SRR) in September 2010.”

The Workshop also concluded that their “highest priority near term goal” is one of closing the lunar architecture, though no reference is made to the final Augustine Commission options that are to be presented to the White House this month, which in turn could completely change that very architecture.

However, it is understandable that CxP workers are continuing with their current plans, as there has not been a directive from NASA management to cease work on what remains as the “Program of Record”.

“Key operations related discussions included the importance of making the EVA Suitport/suitlock decision soon, the near term development of high-level surface ops cons, which would include the integration of crew, robotic and science operations and the need for a strategy to define operational margin,” added the 8th Floor update.

“It was noted by that there won’t be a single ops con for mission/surface operations, but a series that will change by development phase.

“At the conclusion of the workshop the team agreed that the highest priority near term goal is closing the lunar architecture. A number of options were identified which could assist in meeting this goal and will be further refined over the next month.”

At the same time, the alternative to the Ares vehicles, the SD HLLV (Shuttle Derived Heavy Lift Launch Vehicle – or HLV for short) is continuing to receive positive notes on the SSP (Space Shuttle Program) Standup and Integration notes (L2), with the latest notes referring to ongoing work relating to pad aborts, loads analysis and Lunar rendezvous.

“Near term analysis of future work is being collected. These tasks will be prioritized by the group to identify the best needs. A dialogue has begun with the MSFC (Marshall Space Flight Center) Engineering group regarding payload carrier separation and loads analysis,” noted the latest notes on L2.

“Continue to make progress on identifying trade studies, and prioritizing those. Progress was made in identifying some improvements to pad aborts that give better than 90 percent capability to make a water landing. Continue to identify the advantages for lunar orbit rendezvous for the lunar mission.”

WorldView-2 launched via Delta II out of VAFB