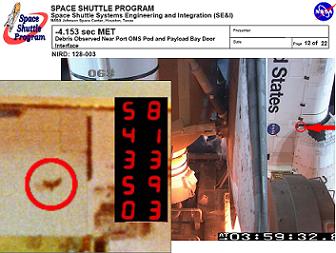 The STS-129 stack has completed rollout from the Vehicle Assembly Building (VAB) to Pad 39A Wednesday, ahead of the Flight Readiness Review (FRR) season – which begins with the MOD FRR on Thursday – that will clear the vehicle to launch on November 12. The STS-128 In Flight Anomaly (IFA) review will make up a large part of the FRRs, with all results so far showing no items of concern.

Following a delay relating to one of the crane controls, the rollout slipped by one day on the schedule – although this holds no impact to the pad flow timeline or launch date.

Once mated with the External Tank (ET-133), Atlantis was put through S0008 Shuttle Interface Test operations, which found one issue with a cable relating to the Range Safety Interface Test.

“Troubleshooting found cables swapped on the facility attenuator panel. However, fixing the cable swap did not correct the low AGC levels. Additional troubleshooting indicated the problem is in other facility cables (one between the HDP (Hold Down Point) to SRB (Solid Rocket Booster) or one from the HDP to the MLP (Mobile Launch Platform) Haunch).

“In order to access these cables for replacement, HDP 2, which is closedout for flight needs to be opened. Cable replacement is in work.”

This issue was resolved within a matter of hours, following the cable replacement and a retest.

“Update: The faulty cables causing the low AGC levels were replaced and the vehicle was powered up to support Shuttle Range Safety System (SRSS) attenuator adjusting, SRSS system interface testing and stray voltage testing which were all successfully completed.”

Rollout of the STS-129 Stack began slightly later than scheduled at 6:38am local time. Despite a stop of around 30 minutes a third the way down the crawlerway, Atlantis arrived at 39A ahead of 1pm.

Closing out the highly successful STS-128 mission in August/September, NASA has completed its series of In-Flight Anomaly (IFA) reviews for the 30th construction mission to the International Space Station. Highlighting the extremely clean nature of the flight is the lack of Ascent Imagery, KSC, Mission Operations Directorate, and general Integrated IFAs for the mission.

As is standard practice for all Space Shuttle missions, NASA’s Imagery Analysis Teams at the Johnson Space Center, the Kennedy Space Center, and the Marshall Space Flight Center conducted a thorough review of all ascent imagery obtained during Discovery’s mid-night launch on August 28th/29th.

The results of that analysis yielded 456 total observations submitted for further analysis.

The first of the 13 “reportable” items came a T-4.153 seconds, when debris was observed “near the port OMS Pod and Payload Bay Door interface,” notes the Ascent Imagery report — available for download on L2.

Currently, this item is classed as “closed” along with five other ascent debris events. 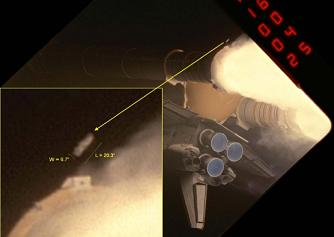 The other “closed” items include possible ice or frost on Discovery at the location of the LH2 (Liquid Hydrogen) T0 umbilical interface at MET (Mission Elapsed Time) 0.73 seconds and debris near the right hand SRB (Solid Rocket Booster) Aft Skirt hold down post #4 at MET 39.6 – 45.2 seconds.

The remaining seven items are still considered “open.” In order of their occurrence in flight, these items include an ET TPS liberation near the lower right hand corner of the GUCP (Ground Umbilical Carrier Plate) at MET 0.57 seconds and debris “traveling aft along port fuselage” at MET 20 seconds.

Debris was also observed falling aft of the vehicle under the left hand wing of Discovery at MET 21 seconds, a liberation of debris from the +Y thrust strut of the ET at MET 55.7 seconds, and aft-falling debris located near the ET -Y Intertank region at MET 2 minutes 3 seconds.

In terms of reportable items in the wake of Discovery’s launch at the Kennedy Space Center, STS-128 is one of the cleanest flights in the history of the Shuttle Program.

In all, “no items of special note for KSC,” states the KSC IFA presentation, available for download on L2. 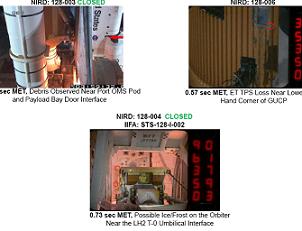 Of these nine items, six have been closed, with appropriate action assigned to ensure that all open work is complete prior to STS-129 in November.

The remaining three are awaiting final closure documentation and are also not a constraint or concern for STS-129 next month.

Of these nine debris items, eight have been included in the Integrated STS-128 IFA Summary for the Program Requirements Control Board.

With STS-128’s IFAs included, the liftoff debris risk environment is unchanged from pre-STS-128 limits. Currently, the risk of critical Orbiter damage from liftoff debris is classed as “infrequent, catastrophic.”

In short, the Mission Operations Directorate (MOD) identified no IFAs for STS-128.

However, demonstrating their dedication to safety, the MOD took the time to identify several Non-IFA Items of Interest from STS-128.

The first of these items of interest was the loss of the Vernier thrusters on Discovery during FD-2 (Flight Day 2).

In response to this, the MOD has called for a review of the Reaction Control System (RCS) Flight Rules to better understand the Flight Control Teams’ options should this situation arise on a future mission.

An Orbit Flight Techniques Panel was handed the task of reviewing the Flight Rules, with instructions to report back to the MOD on October 22 with their recommendations/report. 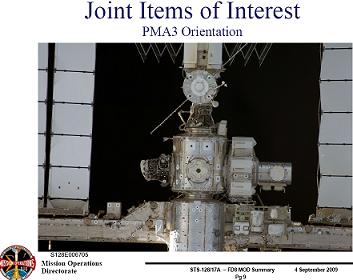 The second item of interest pertained to the PMA-3 (Pressurized Mating Adapter #3) clocking issue observed during one of STS-128’s EVAs.

The root cause of the “PMA-3 clocking issue for heater cable connections is still under investigation through ISS IFI 7361,” notes the MOD presentation, also available for download on L2.

MOD has also begun a review of their internal process for tracking “ISS configuration changes” to ensure that this issue does not happen again.

The next item of interest related to an unexpected pre-launch delay in the Mission Control Center’s (MCC’s) commanding during the MILA (Merritt Island Launch Annex) antenna alignment.

The fifth item of interest on the MOD’s list was a problem with the HD TV downlink on FD-10.

The problem was eventually resolved by purging the MCC MPC hard drive. In the future, the MOD would like to monitor the MCC hard drives more closely and perform purges as-needed to avoid further complications.

The sixth and final MOD item of interest revolved around the scheduling conflict with TDRS 46 (Tracking and Data Relay Satellite 46) during critical phases of the mission.

“Internal MOD scheduling conflict with TDRS 46 for critical periods during eclipse was discovered and corrected prior to final TDRS scheduling,” notes the presentation.

The MOD is investigating the cause of the scheduling conflict in order to have better information on scheduled procedures and channels.

In addition to the Ascent Imagery and KSC IFAs that were included in the Integrated IFA Report to the Program Requirements Control Board, the report notes only three additional Integrated IFAs for STS-128. 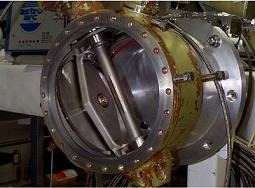 The valve, which was on its 16th and final flight due to time cycle requirements which mandate the replacement of each PV valve after 16 flights, failed to indicate closed during the final moments of tanking for STS-128’s second launch attempt.

“On 8/26 launch attempt, during transition to reduced fast fill, LH2 inboard fill & drain valve (PV12) position indicator did not indicate closed when valve was commanded closed,” notes the Integrated IFA Report, available for download on L2. This was a violation of Launch Commit Criteria MPS-04 and resulted in an automatic scrub of the launch attempt.

After de-tanking and boil-off were complete, the valve was cycled at ambient temperatures and performed as designed, with the valve registering closed each time it was commanded closed.

This allowed Mission Managers to develop Flight Rationale and modified Launch Commit Criteria (LCC) for the valve for STS-128 only.

During the launch countdown on August 28, the valve performed flawlessly under cryogenic temperatures — as it had during the first launch attempt of STS-128 on August 25.

A similar ice buildup was observed on the August 28 launch attempt and a similar waiver was obtained for flight. 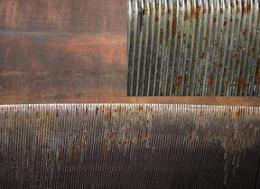 Lastly, the final IFA reported for STS-128 is that of the SSME (Space Shuttle Main Engine) nozzle pinhole leaks.

As first seen on STS-127 – and first reported by NASASpaceFlight.com – numerous pinhole sized leaks were discovered on one of the Endeavour’s engines during post-flight checkouts at the engine refurbishment facility at the Kennedy Space Center.

These pinhole sized leaks were discovered after Discovery’s liftoff and were thus not part of the STS-128 pre-launch discussions.

Upon examination of Discovery’s main engines during her stay at the Dryden Flight Research Center, over 200 pinhole sized leaks were also observed on one of her engines.

Around the time of the inspection of Discovery’s engines, program engineers found what they believe to be the root cause of the leaks: corrosion due to adhesive tape from standard processing.

In all, engineers will perform several tests and analyses to ensure that the “corrosion mechanism is understood.”

Right now, these leaks are not considered to be a show-stopper for STS-129 next month as it is believed that even the worst case leakage from this issue would not cause “significant performance impacts” during the ride uphill.