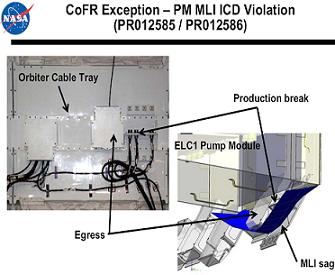 As engineers continue to prepare Shuttle Atlantis for her NET (No Earlier Than) November 16 launch, negotiations to secure a longer launch window for STS-129 (the launch window is currently one day long) are underway between NASA and the Department of Defense. Meanwhile, the SSP Flight Readiness Reviews (FRRs) has concluded with a recommendation to proceed toward the mid-November launch of STS-129.

With the Atlas V rocket team holding steady with their preparations to launch the Intelsat 14 satellite on November 14 from Cape Canaveral Air Force Station, NASA has officially pushed back the NET launch date of Atlantis due to the inability of the Eastern Range to reconfigure tracking equipment between a November 12th 4:04P.M. Shuttle launch and a November 14th 12:30A.M. launch of Atlas V.

While it has been reported that the slip to Atlantis’ launch date is somehow related to a prioritization in NASA of the Ares I-X test flight over STS-129, official documentation reveals nothing of the kind.

In fact, official documentation confirms that the slip to Atlantis’ STS-129 launch was due to range conflicts with the Atlas V and that NASA had been preserving the option to target November 12 should Atlas have been unable to make its November 14 target.

Currently, NASA is targeting November 16 at 2:27:54P.M. for the launch of Atlantis. This launch date, because of the Atlas V rocket, will only be possible if Atlas V launches on November 14.

Currently, Atlas V has launch opportunities on November 14 and 15 before relinquishing the Eastern Range to the Delta IV rocket team which is looking to launch a new WGS satellite on November 18, with a backup opportunity on the 19th.

According to a STS-129 Shuttle Flight Manager memo, available on L2, “NASA is still not on the range for Nov 16th, but preliminary indications are that the Delta IV customer has agreed to slip out of its November 17-20 window
to accommodate the shuttle launch.”

While the Air Force still has to review and approve the proposed changes to the Eastern Range schedule, the apparent agreement of the Department of Defense to push the launch of their WGS satellite out of the November 17-20 window would go a long way toward ensuring a longer, more viable launch window for STS-129.

If the Air Force approves the changes to the Eastern Range schedule, than STS-129 will officially get the range from November 16-19, contingent upon the launch of Atlas V on November 14.

If Atlas V suffers a one day slip due to weather or some other technical reason, Atlas V will still get a second opportunity on November 15 and Atlantis/STS-129 will move to November 17.

Currently, according to the Flight Manager’s memo, the final day of the launch window for STS-129 is November 19 and would require giving up the mission’s +1 contingency day in order to ensure that Atlantis is not docked to the International Space Station once the Solar Beta Angle exceeds 60 degrees.

Because of the short nature of the launch window, if November 17 becomes the first day of the window due to the Atlas V, the Flight Manager’s memo indicates that special consideration would be given to executing three launch attempts in a row (November 17, 18, and 19).

Usually, the launch team tries to avoid three attempts in a row do to launch team fatigue concerns and the ever-present possibility of an on-pad abort in the final 6.6 seconds of the countdown.

In fact, Mike Leinbach expounded upon this point in March during the pre-launch campaign for Shuttle Discovery’s STS-119 mission.

“The thing we try to protect with three in a row, from a launch team perspective, is the on-pad abort. That’s the most critical thing we do on the launch team. If the team is fatigued I wouldn’t want to go into that.”

Nevertheless, should Atlantis end up missing the November launch window for whatever reason, NASA has at least four launch attempts possible at the beginning of December.

“If we fail to launch within this window, we will stand down until December 6th. We’ll then have the capability to support 4 launch attempts in 5 days,” notes the Flight Manager’s memo.

This correlates to a December launch window of December 6-10.

If, for some reason, Atlantis were to miss the December launch window as well, the mission would have to wait until at least January 2, 2010 because of Soyuz crew arrival operations at the ISS on December 23 and the unwillingness of NASA to launch a Shuttle mission over the Year End Roll Over (YERO) unless absolutely necessary – although this is not a hard constraint, following successful work to find a YERO solution

“The FRR concluded yesterday and the SSP gave their concurrence to continue toward the Joint FRR on 10/29 with a target launch date for STS-129 of NET 11/16,” noted information on L2. “No real technical show stoppers were discussed; however range conflicts still need to be addressed.”

Currently, the main FRRs (the Space Operations Mission Directorate FRR) is scheduled to take place on October 29 at the Kennedy Space Center.

The SOMD FRR, headed by Associate Administrator for Space Flight Operations Bill Gerstenmairer, will officially approve Atlantis’ launch date after thoroughly reviewing all aspects of the vehicle and the mission.

Furthermore, the ISS Stage Operations Readiness Review – a readiness review by the ISS Program to confirm their readiness post-STS-129 — was completed on October 19th. As a result, “the ISS Program and its International Partners are ready to support the STS-129/ULF3 mission,” notes the Flight Manager’s memo.

The ELCs were loaded into the Payload Transport Canister on October 21st ahead of the scheduled October 29th delivery to LC-39A.

“The ELC1 & 2 Pump Module MLI clearance and robotics snag issues have successfully been resolved,” notes the Flight Manager’s memo. “Straps have been installed on both Pump Modules to better secure the Multi-Layer Insulation.”

The memo goes on to note the “Great work by the joint Payload Cargo Engineering and KSC Payload Processing Teams for successfully identifying and resolving this issue within one week of the Payload Readiness Review.”

Meanwhile, at LC-39A, Solid Rocket Booster HPU (Hydraulic Power Unit) plugs have been completed, the PV-11 Fill and Drain valve actuator on Atlantis has been successfully Removed and Replaced, and Helium signature tests have been run.

Final S0008 activities that were deferred from the VAB to the pad will be finished this week as well.

Also at the pad for the first part of this week was the STS-129 crew who are undergoing what is now a split Terminal Countdown Demonstration Test (TCDT).

The actual TCDT – consisting of a mock countdown with simulated pad abort – won’t take place until early November; however, the Flight Crew is receiving the pad egress training portion of the multi-day TCDT activities as well as approach and landing runs for Commander Hobaugh and Pilot Wilmore in the Shuttle Training Aircraft.