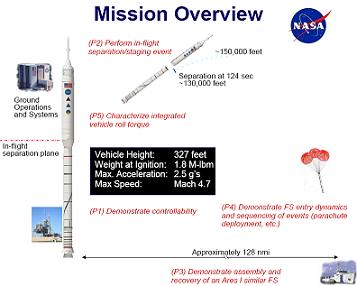 Ares I-X has launched on the second attempt at 11:30am Eastern, and although the First Stage and the Upper Stage Simulator (USS) appeared to recontact after separation (later confirmed that no recontact took place) – managers are claiming the flight to be a success. Sources also claim one of the FS’ parachutes failed, with the booster splashing down with two working parachutes.

The first launch attempt on Tuesday was delayed for 24 hours due to several weather rule violations, including excessive wind speeds at the launch pad – which were exceeding the 20-knot limit – along with concerns about clouds with moisture that could have caused static build-up on the rocket and led to communication issues – known technically as triboelectrification.

With slight delays caused by issues other than the weather – such as the problem with the removal of a protective cover from the top of the vehicle and the ship that breached the strict Eastern Range exclusion zone – time was lost prior to coming out of the four minute hold.

At one point, the count managed to head past the hold and got as close to as two and a half minutes to launch, before the weather once again closed in – with Weather Office Kathy Winters giving notice of unacceptable conditions at T-0.

While lightning and rain were observed near the launch pad overnight, forecasters were more hopeful for acceptable conditions for the Wednesday launch attempt, predicting a 60 percent chance of favorable weather, with four hours of window available to launch director Ed Mango. However, triboelectrification weather conditions moved the launch back to 11:30am Eastern.

Recent – over the past one year period – Ares I-X Articles on NASASpaceflight.com can be found on this link:
http://www.nasaspaceflight.com/tag/ares-i-x/

With the countdown overviewed in the opening launch attempt article, Wednesday’s attempt focused on the launch events, as Ares I-X opened the flight test era of the Ares launch vehicle program – albeit a program that may yet be cancelled in the coming months.

At liftoff, Ares I-X will weigh 1.8 million lbs, with the four segment SRB providing between 2.6 and 3.3 million lbs of thrust that will propel the Ares I-X to a height of 130,000 ft. The SRB nozzle will be gimbaled at Mission Elapsed Time (MET) 0.1 seconds for the “fly away” maneuver (designed to pull I-X away from the launch tower). First motion off the MLP is expected at MET 0.2 seconds.

The RoCS (Roll Control System) will be enabled and the 90-degree roll program started at MET six seconds. The “fly away” maneuver will be considered complete at MET 20-seconds.

For the first 91 seconds of flight, the RoCS system will be activated every 10 seconds to counter any axial roll of the vehicle. MaxQ is expected at ~MET 50 seconds. The Flight Control System phase of flight will transition into the separation phase of flight at MET 2 minutes 00.6 seconds.

At the time of SRB and USS separation, the Ares I-X will be travelling at approximately mach 4.76 at an altitude of 130,000 ft. The maximum acceleration force during flight will be 2.48 g. The SRB tumble motors will fire at MET 2 minutes 18-seconds, inducing a horizontal tumble into the SRB’s profile. This will increase drag on the SRB, preventing recontact with the free flying USS and slowing the SRB down during reentry.

The Recovery Control Unit pyro will be armed at MET 2 minutes 45-seconds. 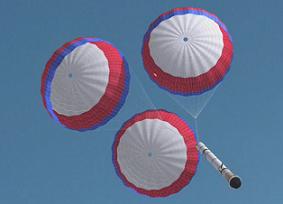 After coasting to an altitude of 150,000 ft, the parachute system will engage at 16,000 ft (or MET 5 minutes 15 seconds) with the deployment of pilot chutes. The main chutes will be deployed at MET 6 minutes 15 seconds, brining the SRB to a manageable speed for splashdown in the Atlantic.

The First Stage nozzle will be severed from the SRB at MET 6 minutes 35 seconds, with splashdown occurring ~147 miles downrange from KSC just prior to MET 7 minutes. The USS will also coast to approximately 150,000 ft before plunging into the Atlantic Ocean at near terminal velocity. The USS is expected to break apart upon impact with the water and sink to the ocean floor.

The parachute recovery system is the most mature element of the Ares hardware that is currently under development.

Several tests have been carried out at the US Army Yuma Proving Grounds on the giant parachutes which are set to return the five segment Ares I first stage to a splash down in the Atlantic Ocean. 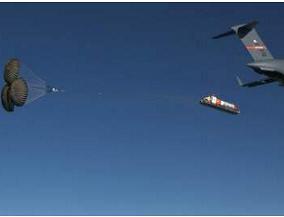 The latest successful test was just this month, with a 72,000 pound test payload, including the Jumbo Drop Test Vehicle (JDTV), dropped from the back of a US Air Force C-17 aircraft at 25,000 feet – designed to test the design load limits of the Ares I main parachute system.

The main parachute, measuring 150 feet in diameter and weighing 2,000 pounds, is the largest rocket parachute ever built and the primary element of the vehicle’s deceleration and recovery system, which also includes a pilot parachute and drogue parachute.

The parachutes work in tandem providing the drag necessary to slow the descent of the huge Ares I solid rocket motor, allowing for a relatively gentle splashdown and subsequent recovery. 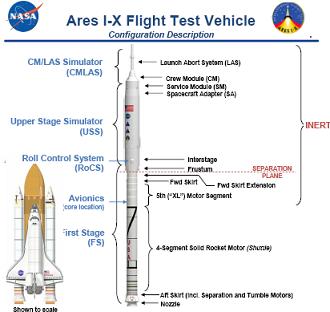 While Ares I-X is a four segment motor, an “empty” fifth segment – known as the “XL” motor segment – makes up the first stage. The change of design to the four segment Shuttle booster will result in additional useful data that will be gained after Ares I-X’s powered flight ends.

In fact, the recovery of the First Stage via the parachute system is classed as the Priority 4 task of this test flight: “Demonstrate FS (First Stage) entry dynamics and sequencing of events (parachute deployment, etc.),” noted Launch Readiness Review Documentation (presentations on L2).

With the Ares booster recovery system including some of the heritage from the shuttle’s booster systems, issues on the final flights of the shuttle are also providing important information for the next generation of space vehicle.

Such information can be seen as recently as the last shuttle mission, STS-128 – when it was revealed by the In Flight Anomaly Review (IFA) review that the main parachute on the Right Hand Solid Rocket Booster recovery system failed, leading to the booster impacting the ocean with a higher than expected force.

The review was conducted at a Program Requirements Control Board (PRCB) meeting, with 15 departments presenting issues found prior, during and after Discovery returned to Earth. A large number of departments noted no issues.

The results of the IFA review created the baseline for the next mission’s Flight Readiness Review (FRR) – namely Atlantis’ STS-129 mission in November, and also Discovery’s next mission – STS-131 next year. 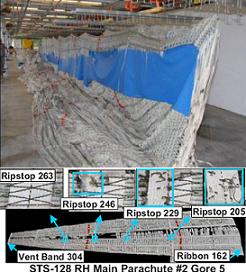 Highlights from the IFA presentations – all acquired by L2 – include the main parachute anomaly on the Right Hand Booster. As with Ares I-X, the booster has three main parachutes that slow the expended booster during its splashdown in the Atlantic ahead of recovery and eventual reuse.

Several conclusions can be noted from the failure, that the booster still survived for potential reuse despite the loss of one of the main parachute, and that this parachute was on its tenth flight and was repaired from an issue it suffered on a previous flight.

The full results of how the parachutes performed with Ares I-X are expected just days after launch, once the booster and recovery systems are examined back in port.