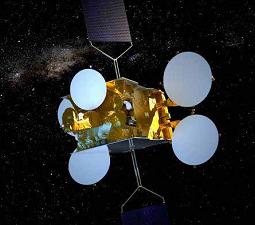 Arianespace have launched their fifth mission of the year via their latest flight of the Ariane 5 ECA launch vehicle. The workhorse launched with the Amazonas 2 and COMSATBw-1 satellites, with lift-off on schedule at the start of a 71 minutes launch window that opened at 6:59 pm local time in French Guiana (5:59 Eastern US).

Flight 191 is the 47th Ariane 5 launch and the fifth in 2009. An Ariane 5 ECA (Cryogenic Evolution type A), the most powerful version in the Ariane 5 range, will be used for this flight. Flight 191 is a commercial mission for Ariane 5.

Launcher 549, the 43rd production phase ARIANE 5, is the twenty-first of the 30 PA contract launchers, for which Astrium is production prime contractor. 546 is consequently the nineteenth complete launcher to be delivered to Arianespace, integrated and checked out under Astrium responsibility in the Launcher Integration Building (BIL).

The vehicle is powered by the EPC (H175) main cryogenic stage with the new Vulcain 2 engine, with two EAP (P240) solid propellant strap-on boosters secured on either side of the EPC. The upper stage runs from an ESC-A cryogenic upper stage engine.

Compared with the ARIANE 5 ‘generic’ version of the main stage, the main changes are integration of the Vulcain 2 engine (generating 20% more thrust than the Vulcain 1), lowering of the tank common bulkhead, and strengthening of the forward skirt and thrust frame structures. As in the case of the previous A5 ECA launcher (L521) used for flight 164, the Vulcain 2 has undergone a number of changes, principally to the nozzle (shortened and strengthened) and the cooling system (dump-cooling).

The tank is divided into two compartments containing 175 tons propellant (approximately 25 tons liquid hydrogen and 149.5 tons liquid oxygen). The Vulcain 2 engine delivers of the order of 136 tons thrust, and is swivel-mounted (two axes) for attitude control by the GAM engine actuation unit. The main stage is ignited on the ground, so that its correct operation can be checked before authorizing lift-off.

The main stage burns continuously for about 535s, and delivers the essential part of the kinetic energy required to place the payloads into orbit. The main stage also provides a launcher roll control function during the powered flight phase by means of the SCR (roll control system). On burnout at an altitude of 174km for this mission, the stage separates from the upper composite and falls back into the Atlantic Ocean.

Amazonas 2 will ride as the upper payload, with COMSATBw-1 positioned as the lower satellite passenger in the Ariane 5’s stack. The two spacecraft will be deployed during a mission lasting 33 minutes.

The total lift performance for this upcoming launch is 9,087 kg., which includes 7,905 kg. for the Amazonas 2 and COMSATBw-1 satellites, along with the mass of Ariane 5’s SYLDA dual-payload dispenser and the associated integration hardware.

Weighing approximately 5,500 kg. at liftoff, Amazonas 2 will be injected into geostationary transfer orbit by Ariane 5, and is to operate from a final orbital slot of 61 deg. West. The satellite is based on EADS Astrium’s Eurostar E3000 spacecraft bus, which will supply a payload power of about 14 kW.

Amazonas 2 will provide the Spanish-based HISPASAT telecommunications operator with relay capacity over the Americas, with its coverage area extending from Alaska to Tierra del Fuego. The spacecraft is designed for a useful lifetime of 15 years, and is to handle a wide range of communications services – including direct-to-home television – through its 54 Ku-band transponders and 10 C-band transponders.

Riding with Amazonas 2 on the upcoming Ariane 5 mission will be Germany’s COMSATBw-1 military telecommunications satellite. COMSATBw-1 is part of a secure information network to supply voice, fax and advanced data, video and multimedia applications for the German armed forces, including units on deployed missions. EADS Astrium is prime contractor for this program’s space segment, which is composed of two satellites based on the Spacebus platform. 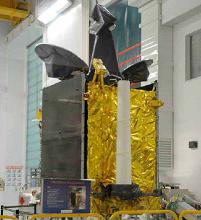 COMSATBw-1 is a secure relay platform that will play an important role in the German Bundeswehr’s (German armed forces) concept for network-centric operations. It is to handle secure information for use by units on deployed missions – including voice, fax, data, video and multimedia applications – as the backbone of a strategic command infrastructure and interface with the tactical arms of the German Armed Forces.

The overall industrial responsibility for this secure communication program is with Milsat Services (a 75 percent Astrium/25 percent subsidiary of ND SatCom Defence).

EADS Astrium is prime contractor for the German military program’s space segment, and has booked its two spacecraft for Arianespace launches – beginning with COMSATBw-1 on the upcoming Ariane 5 flight. With a liftoff mass of 2,500 kg. at launch and a design life of 15 years, the satellites will operate in geostationary orbit and provide communication services over an area stretching from America to eastern Asia.

The flight with Amazonas 2 and COMSATBw-1 is part of Arianespace’s busiest launch year for Ariane 5 since its 1999 commercial service introduction. A total of seven missions are planned with the workhorse launcher during 2009, with four of these already performed to date – orbiting a combined payload mass of more than 26,000 kg.