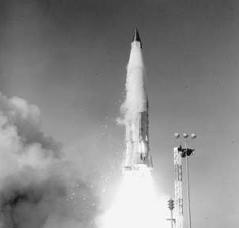 After nearly 52 years of venerable service to the United States and the world’s space endeavors, the veteran Atlas rocket vehicle has embarked on its 600th mission Sunday, launching the USAF Defense Meteorological Satellite Program F18 (DMSP F18) satellite from Vandenberg AFB on the newest member of the Atlas rocket family: the Atlas V.

Making its inaugural flight on December 17, 1957, the Atlas missile was originally conceived of and built as an Intercontinental Ballistic Missile (ICBM) for the United States during the Cold War against the Union of Soviet Socialist Republics.

Approximately 350 Atlas missiles were originally constructed, many of which were later converted into orbital launch vehicles after the missiles were withdrawn from military service.

Since 1957, the various incarnations of the Atlas rocket (18 in all), have been responsible for a wide range of successful launches for the U.S. and world community.

Some of these missions include the launch of the first communications satellite, four of the six manned Mercury Program missions, Agena target vehicles for the Gemini Program, numerous weather satellites, the Mars Reconnaissance Orbiter, the New Horizons probe to Pluto and the Kuiper Belt, and the Lunar Reconnaissance Orbiter and Lunar CRater Observation and Sensing Satellite.

In all, 475 of the 599 Atlas rocket launches have been successful, with 117 out right failures and seven partial failures.

To date, 314 Atlas launches from been conducted from the Cape Canaveral Air Force Station in Florida and 285 from Vandenberg Air Force Base in California.

For Sunday’s 600th Atlas launch, the Defense Meteorological Satellite Program F18 (DMSP F18) satellite will be carried to orbit by the extremely reliable Atlas V rocket — which is owned and operated by United Launch Alliance (ULA).

The Atlas V, which will make its 18th launch Sunday, has a near perfect success record, with only one partial launch failure that actually resulted in a “mission success” label by the payload customer on that flight when the Centaur upper stage booster experienced an anomaly and placed the satellite payload into a lower-than-planned orbit.

The task of lifting the rocket and DMSP F18 satellite off its California launch pad is that of the Atlas V booster’s – measuring 12.5 feet in diameter and 106.5 feet in length.

The booster, which contains one RD-180 engine with two thrust chambers, will provide approximately 860,200 lbs of thrust at liftoff by burning highly purified kerosene and liquid oxygen. Eighteen seconds after liftoff, the engine nozzle will be gimbaled to pitch the Atlas V onto a 186-degree flight azimuth.

Then, after a 247-second (4-minutes and 07-seconds) burn, the Atlas V booster will be commanded to BECO (Booster Engine Cutoff). Six seconds later, the booster will separate for the Centaur upper stage — at which point the Centaur’s solo RL10A-4-2 engine will ignite, producing 22,300 lbs of thrust by burning liquid oxygen and liquid hydrogen.

The Centaur rocket engine will fire for approximately 11-minutes, placing the DMSP F18 satellite into a 462.8 nautical mile circular orbit at a 99-degree inclination to Earths’ equator.

The DMSP F18 satellite will then separate from the Centaur upper stage 2-minutes 49-seconds after Centaur MECO-1 (Main Engine Cutoff 1) and 18-minutes 09-seconds after liftoff from Vandenberg.

“Sixteen minutes after spacecraft separation, and once the CCAM has been completed, the Centaur will turn to its demonstration attitude,” notes the ULA presentation.

This phase of the Centaur’s flight will last from T+35-minutes until T+2-hours 45-minutes and is designed to “qualify expanded Centaur operations capabilities.”

After this demonstration period, the Centaur’s disposal phase will begin. The disposal will be accomplished by reigniting the Centaur’s engine at T+2-hours 58-minutes with MECO-2 at T+3-hours 2-minutes.

This burn, lasting four minutes, will place the Centaur on an Earth-escape trajectory. After MECO-2, a “blowdown” of the Centaur’s propellant tanks and a burn off of any leftover hydrazine will take place.

These procedures are expected to be completed by T+3-hours 45-minutes – at which point the mission (in terms of the Atlas V rocket and ULA) will be considered complete.

The Defense Meteorological Satellite Program F18 (DMSP F18) satellite will help the Air Force provide “strategic and tactical weather prediction … to aide the U.S. military in planning operations at sea, on land, and in the air,” notes the ULA mission over presentation. 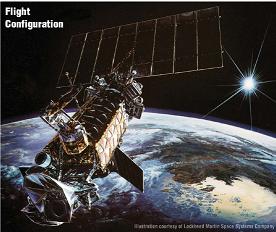 Furthermore, “DMSP is a space- and ground-based system to collect and disseminate timely global environmental data to the Department of Defense and other governmental agencies.”

DMSP F18 will provide viable data on soil moisture, surface temperatures, and cloud cover around the globe via its multitude of onboard sensors and polar orbit.

The presentation goes on to discuss some specifics of the DMSP satellite system, of which F18 is a part. “DMSP satellites ‘see’ environmental features such as clouds, bodies of water, snow, fire, and pollution in the visual and infrared spectra.”

The satellite system can monitor global water temperatures, cloud cover, water currents, and ocean surface characteristics during their 101-minute orbital period around Earth. This, coupled with their polar and “sun-synchronous” orbits, allows each DMSP weather satellite to monitor nearly the entire globe every six hours.

The data collected by the satellites is transmitted to the ground where a team of meteorologists interpret the data and disseminate the information for the U.S. military, which in turn uses the data to plan and conduct U.S. military operations around the globe.

In addition to DMSP F18, two more DMSP weather satellites are awaiting launch. These satellites are currently stored at Space Systems’ operations in Sunnyvale, California. They will be transported to Vandenberg upon the request of the Air Force for launch operations.