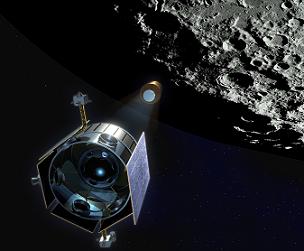 After a three month 21-day cruise through space to boil off excess propellant and fine tune a final approach to the moon, NASA’s LCROSS (Lunar CRater Observation and Sensing Satellite) mission concluded Friday morning, as the companion Atlas V Centaur upper stage and the LCROSS satellite slammed into the Cabeus crater in the moon’s southern polar region at 7:31:30 A.M and ~7:35:30 A.M EDT, respectively.

The LCROSS mission was selected by NASA in April 2006 as a “low-cost, fast track companion for the Lunar Reconnaissance Orbiter.”

Designed to answer the question “Does water exist in a permanently shadowed lunar crater,” the LCROSS experiment will utilize a “shepherding spacecraft” packed with instrumentation and the Atlas V’s Centaur upper stage to complete its mission objectives of smashing into a permanently shadowed crater at the moon’s south pole and examining the ejecta plume for traces of water and other minerals/materials that might be useful to future human settlements on our closet cosmic neighbor.

Nevertheless, this confirmation in no way diminishes the vital role of the LCROSS mission because the confirmation of lunar water also revealed that the amount of water on the moon’s surface is minute – only about 32-ounces per one ton of the lunar top surface.

As such, LCROSS’s mission is, and has been, to eject a deeper layer of the lunar material (a layer below the top soil) beyond the rim of a permanently shadowed polar crater so that LCROSS, LRO, the Hubble Space Telescope, and hundreds (if not thousands) of ground-based telescopes can monitor and analyze the ejecta plume for the presense, consistency, and concentration of water.

To accomplish these objectives, LCROSS was launched underneath the LRO on an Atlas V rocket from the Cape Canaveral Air Force Station on June 18, 2009.

Shortly have being injected into a lunar transfer orbit via the Atlas V Centaur’s upper stage rocket engine, LCROSS and its companion Centaur upper stage separated from the LRO spacecraft.

Four days later, LCROSS/Centaur successfully performed a lunar “swing-by,” placing the duo into an elongated polar Earth orbit with a period (or orbital time) of 37-days. This was accompanied by a guided blow down – blowing cold propellants through the Centaur’s engine, without igniting the engine, to get a few hundred pounds of thrust.

After that, the Centaur upper stage (with attached LCROSS) was put into a flat-spin to deplete propellants and inert the Centaur upper-stage so that no contaminants are introduced to the Cabeus crater during Centaur impact.

Over the next three months, NASA collected data on the leading lunar south pole craters that could host the Centaur/LCROSS impacts. These observations came via images and hydrogen concentration measurements from NASA’s LRO satellite as well as the Japan Aerospace and Exploration Agency’s Kaguya spacecraft – which both indicated that the crater Cabeus contained the greatest concentration of hydrogen atoms at the moon’s southern polar region.

On October 8, the LCROSS and Centaur separated from each other in preparation for the October 9 duel impacts.

Later this morning, LCROSS will fire its thrusters to slightly lower its velocity, allowing it to trail about four minutes behind the Centaur upper stage and fly through the ejecta cloud created by the Centaur’s impact with Cabeus.

By flying through the ejecta cloud, LCROSS will collect invaluable scientific data (including visual observations) and transmit that data real-time to Earth.

These instruments were selected to “provide mission scientists with multiple complimentary views of the debris plume created by the Centaur impact,” notes a NASA fact sheet about the mission.

Following the Centaur’s impact, the ejecta cloud will rise above the surface of the crater’s rim – thereby exposing the ejecta to sunlight. Once this occurs, any water, hydrocarbons, or organic materials will vaporize or sublimate and break down into their basic components.

It is these components that the LCROSS spacecraft will monitor and analyze as it passes through the ejecta cloud.

The near-infrared and mid-infrared cameras will help determine the total amount and distribution of water in the debris plume while the visible radiometer will monitor the flash created by the Centaur’s impact on the surface.

After flying through the debris cloud, the LCROSS satellite will also impact the lunar surface, creating a second debris cloud.

Both of these debris plumes will be visible from Earth-based telescopes of 10- to 12 inches and larger across a majority of the continental U.S. and North America.

The plumes are also expected to be visible from space-based telescopes as well – including the recently repaired/upgrading Hubble Space Telescope.

Together, the LRO/LCROSS missions – which are components of the Lunar Precursor Robotic Program from the Marshall Spaceflight Center in Huntsville, Alabama – will help map the moon’s surface and pave the way for future robotic and human missions in the years to come.

As Todd May stated in the LRO/LCROSS pre-launch briefing on Monday, “LRO and LCROSS will give us the information about the moon that we already have about Mars.”

WorldView-2 launched via Delta II out of VAFB