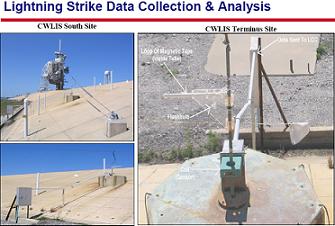 From an official standpoint, STS-129 is continuing to target a November 12, though Shuttle manager John Shannon noted on Thursday that Atlantis will likely aim for a window between November 17-19 – due to an Eastern Range conflict with an Atlas V launch. Meanwhile, engineers are evaluating the shuttle and pad’s electrical systems, following “multiple indications” of lightning strikes on the pad complex during Wednesday evening.

Atlantis arrived at 39A following the rollout of the STS-129 stack from the Vehicle Assembly Building (VAB) on Wednesday morning. This was followed by the operation to transition the Rotating Service Structure (RSS) to the mate position.

Preparations are also taking place to changeout the actuator on Atlantis’ PV11 LH2 Outboard Fill/Drain Valve – following “false indication” issues with the same system on Discovery during the STS-128 countdown.

The changeout on Atlantis will help mitigate against a similar problem with the valves’ open and closed indications during STS-129’s tanking.

Meanwhile, A Phase II Lightning Event occurred on Wednesday evening, holding up pad operations for approximately three hours. During the event, several lightning strikes were recorded by the array of lightning detection sensors on and around the pad.

“At 1730 EDT there were multiple indications of a lightning strike at the pad. Triggers were tripped in GLMS, LIVIS/CWLS, and the catenary wire system,” added Thursday processing information.

“In addition, reports from both the MLP (Mobile Launch Platform) and the White Room of a ‘pop’ were heard at the same time. Corroborating evidence from OTV photos indicate a primary lighting strike to the Sound Suppression water tank and a secondary strike to the Pad-A lightning mast. Cameras 43 and 60 were knocked offline at the time of the strike.

“S0018.100 data collection: Preliminary Lightning Analysis is in work by the console. No STRIKEnet report has arrived at the console yet.”

As of the time of this article was published, testing was set to begin on the orbiter’s electrical systems. “Orbiter Frequency Response Test preparations are underway. This test will occur tonight during second shift.” 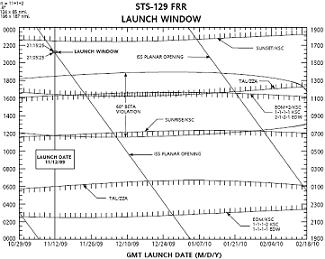 This boils down to very limited options for Atlantis, with NASA appearing to favor a November 17-19 window for STS-129 while, at the same time, preserving the option to launch on November 12.

According to the latest Space Shuttle Program Standup Report on L2, Mr Shannon states that “From a launch date standpoint, the window is from November 12-19, with the most likely days being November 17-19, due to the Atlas and Delta rockets hoped to launch during that window as well.”

However, there appears to be some confusion over exactly when the Eastern Range will be available.

According to the latest Integrated Process Flow chart for STS-129, November 12-15 is no longer available for Atlantis due to the Atlas V rocket launch of Intelsat 14 in the early morning hours of November 14.

Given the late afternoon launch time of Atlantis on November 12 (4:04P.M.), and 36 to 48 hours necessary to reconfigure the Eastern Range to support the Atlas V, the 12th may no longer be an option for Atlantis from a pure mathematical standpoint.

Similarly, the Integrated Flow chart also states that November 17-20 are not available because of the night launch of a Delta IV rocket with a new WGS satellite on November 18. That launch is currently scheduled for 7:45P.M.-8:30P.M. EST.

As such, the Integrated Flow chart lists November 16 as the only available launch date for Shuttle Atlantis. This would seem to be in conflict, however, with Mr. Shannon’s comments on the last Standup Report, which intimates a launch of STS-129 sometime between November 17-19.

As always, NASA and the KSC Test Director Office are currently looking at the possibility of negotiating a slip of the Delta IV launch to allow Atlantis additional launch opportunities at the end of the window; however, no official decision has been reached and Delta IV remains on the Range for November 18.

Regardless of the outcome of these negotiations, all the rockets’ launch dates are currently listed as No Earlier Than (NET) and are subject to change based on the respective vehicles’ performance’s during their prelaunch campaigns.

Therefore, as it currently stands, the KSC launch team has only one day to get Atlantis off the pad in the November launch window.

Further complicating matters is the hard constraint of a Beta Angle Cutout that begins on November 20 for Space Shuttle Atlantis.

“The beta cutout begins on November 20 and extends through December 5,” notes the Flight Director’s memo. However, a launch attempt on November 21 may also be possible, but only if the +1 day of the 11+1+2 day mission was eliminated pre-launch and Delta IV launches on time on November 18.

Furthermore, there had also been the concern last month that the Russian Soyuz crew rotation schedule in November and December could have pushed STS-129 into January 2010 if a launch in November did not occur.

That issue has been resolved and cleared thanks to the realignment of the Russian undocking and launch schedule.

Currently, the Soyuz TMA-15 spacecraft (which was launched in May 2009) is scheduled to undock from the International Space Station on December 1, with the Soyuz TMA-17 launch of a new three person ISS crew subset slated for December 21.

This rearrangement has cleared a small launch window for Atlantis in early December should STS-129 be unable to launch in November.