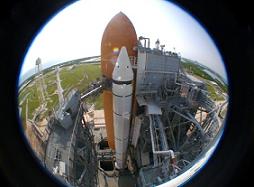 Despite the Augustine Commission’s review into NASA’s Human Space Flight program “advising” the Shuttle Program stretches deep into 2011 – even without the potential expansion/additions to the manifest – no instructions have yet been received to slow down the pace of preparing the remaining six missions on the schedule.

With 2009’s manifest ending with the flight of Atlantis, five missions remain on tap for 2010. That adds importance to the need to launch STS-129 in one of the short windows before the end of the year – with the opening opportunity sandwiched between an Atlas V and a Delta IV launch from Cape Canaveral.

With the Eastern Range requiring between 36 and 48 hours to reconfigure for each vehicle, the opening effort by SSP managers relates to an arrangement with the Atlas V launch, in order to ensure STS-129 remains on track to be at least ready to make an opening launch attempt on November 16.

If the Atlas V fails to launch on the first attempt (November 14), Atlantis may be reduced to a two day window – depending on the amount of time it would take to reconfigure the range – with Atlantis then holding the range for the 17th and 18th.

In order to arrange a maximum three day window, the Delta IV launch will have to accommodate Atlantis by moving a couple of days to the right of its original November 18 launch date. This all appears to be going to plan, following the SSP Flight Readiness Review (FRR) last week.

“Mr. Shannon thanked everyone for the hard work leading up to the STS-129 SSP FRR. This review went extremely well. The NET (No Earlier Than) launch date of November 16 is becoming more firm,” noted the final Shuttle Standup/Integration Report of the week (available on L2).

With the slip of four days to the previously scheduled November 12 launch date, pad processing of Atlantis is on a relaxed schedule, with only a handful of minor issues requiring further work – as the weekend flow finishes up on hypergolic loading, known as S0024 operations.

“New IPR (Interim Problem Report): MIA (Command Logic) word errors were experienced just prior to the RJD (Reaction Jet Driver) test. Initial troubleshooting for DPS (Data Processing System); will perform a memory dump when the pad is reopened following S0024. Engineering believes the condition is covered by a User Note, but will evaluate the troubleshooting data to confirm.

“New IPR to Integration: During deployment of the +Y Orbiter Weather Protection (OWP) at Pad A, it was observed the platform came in close proximity to the SSV (Space Shuttle Vehicle).

“This proximity does not allow for nominal installation on the handrails on the +Y Platform. Temporary handrails which provide more clearance have been installed.

“Engineering is analyzing the OWP to determine the possible cause.

The first of five scheduled missions in 2010, Endeavour’s STS-130/20A flight will deliver and install the final US module to the ISS. This module, the Node-3 and adjoining Cupola unit, is currently undergoing processing for flight in the Space Station Processing Facility (SSPF) at KSC.

Endeavour, processing in OPF-2, is deep into her flow, following her return from the highly successful STS-127 mission which delivered the final piece in the Japanese jigsaw on Station. 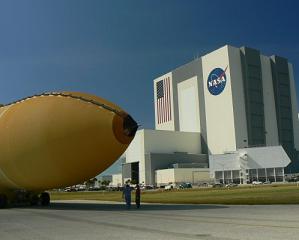 Two major milestones have been reached, with the arrival of ET-134 at KSC – following its barge trip from the Michoud Assembly Facility (MAF) in New Orleans, and the installation of all three of Endeavour’s SSMEs.

ET-134 will be housed in one of the VAB’s Checkout Cells, where it will be inspected and prepared for a crane journey over to High Bay 1 – which received a Mobile Launch Platform (MLP-2), ahead of Solid Rocket Booster (SRB) stacking for what will be the third milestone in quick succession for STS-130.

“SSME 2 was installed Thursday; securing is in work and will be followed by heatshield installations next week. SSME 1 and SSME 3 were installed earlier in the week.”

Endeavour’s two robotic arms were also stowed for flight this week, allowing for the Payload Bay Doors (PLBDs) to be closed for engineers to conduct work on the orbiter’s Thermal Protection System (TPS).

“The OBSS (Orbiter Boom Sensor System) and RMS (Remote Manipulator System) were stowed Thursday. PLBDs will be closed today in support of TPS work over the weekend,” processing information continued.