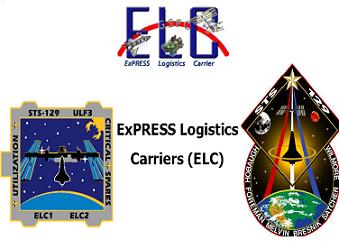 With less than two weeks to go before the scheduled launch of Space Shuttle Atlantis to the International Space Station (ISS), technicians at Launch Pad 39-A have begun installing the STS-129 payload into Atlantis’ Payload Bay. Meanwhile, overall preparations for Atlantis’ launch continue on track – with no major pad processing issues of note.

After several revisions to Atlantis’ pad flow due to the dual flow operations between the STS-129 vehicle and Ares I-X, the mission’s payload-to-pad delivery date underwent a few changes to accommodate the scheduling needs of the workforce.

The mission’s payload arrived at Pad-A in the early morning hours of Friday, October 30. ELCs 1 and 2 (Express Logistics Carriers 1 and 2) were then removed from the Payload Transport Canister later that day and transfer to the Payload Ground Handling Mechanism (PGHM).

After the payload was secured in the PGHM, the Rotating Service Structure was moved around orbiter Atlantis last weekend and her Payload Bay doors were opened earlier this week ahead of payload installation today.

Over the next few days, payload integration checks with Atlantis’ systems will be performed ahead of final Flight Crew inspection of the payload a few days before launch.

Under current schedules, Atlantis’ Payload Bay Doors are scheduled to be closed for launch on November 12 ahead of the planned November 16 launch.

Overall, no issues are expected with the payload installation and integration checks with orbiter Atlantis due to the superb effort of NASA and contractor engineers in their handling and pre-pad delivery checkouts of the ELCs.

For the SASA, the Payload/Cargo Engineering department reviewed the possible effects to the SASA should the APCA 3 fail “ON” or “OFF.”

If the APCA 3 should fail “ON,” there will be no impact to ascent and entry.

Since the SASA engineers were able to provide data supporting the fact that the Flight Support Equipment thermostat heaters are “hermetically sealed” (and are thus not an ignition source), the SSP FRR was able to accept the potential failed “ON” condition of the APCA 3.

Similarly, there are no impacts to Atlantis or EVA operations if the APCA 3 fails “ON.”

Likewise, should the APCA 3 fail “OFF,” there is no mission impact because “SASA is safe without services.”

In terms of the Payload for STS-129, the Payload community has no deferred conditions and only one (approved) unexplained anomaly.

Additionally, five Orbiter Lost and Found and two payload Problem Reports were reviewed by the payload community. The items have been closed by the appropriate authorities and are not a concern for flight.

However, the payload processing teams did work one late issue that was discovered during ICD walkdown of ELC 1 and ELC 2.

“During the ICD walkdown of ELC1 and ELC2 on 10/9/09, a significant envelope violation was discovered with both Pump Module Orbital Replacement Unit (ORU) Multi-Layer Insulation (MLI) enclosures.”

The violation was observed on the outboard, lower edge of the both ORU MLI enclosures. These enclosures are “further outboard and below where expected/intended.”

This creates a contact concern between the ORU MLI and Atlantis’ Payload Bay cable trays.