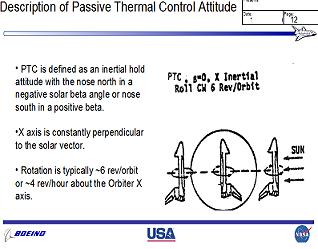 As Atlantis’ seven member crew enjoy a working Thanksgiving on orbit, preparations are in full swing to bring Atlantis home tomorrow morning after, what has been, an extremely successful mission to the International Space Station. Meanwhile, Flight Controllers are evaluating a potential thermal control issue on Atlantis should the vehicle still be on orbit come Sunday.

Atlantis continues to perform without major issue as her penultimate mission draws to a close.

Today, the crew (while celebrating the U.S. Thanksgiving holiday) will spend a great deal of time preparing Atlantis for reentry.

Waking up at 1:28a.m. EST this morning to Frank Sinatra’s “Fly me to the moon”, Atlantis’ crew got right to work, beginning final cabin stow operations for landing just after 4:30a.m. EST.

Checkout of the Flight Control System is scheduled for 5:48a.m. followed less than an hour later by a test firing of Atlantis’ Reaction Control System thrusters – thrusters that will be used during the initial phases of Atlantis’ reentry Friday morning. All checkouts showed nominal results.

Later this afternoon, at 1:28p.m., Nicole Stott’s recumbent seat will be installed into Atlantis’ middeck. Stott, who launched on Space Shuttle Discovery during the STS-128 mission in August, is returning home after two and half months on the International Space Station.

Finally, Atlantis’ Ku Band antenna is scheduled to be stowed for landing at 2:28p.m. today.

Earlier in the day, the crew carried out the SEITE burn – which is an 18 foot per second dual OMS burn. The burn was radial down (nose to the Earth) such that the burn plume will be observed by the orbiting C/NOFS satellite. Later, he SIMPLEX burn – also an 18 foot per second dual OMS burn, will be conducted, with the burn plume observed by the Arecibo ground station.

Atlantis’ crew is scheduled to bed down for the night at 5:28p.m. ahead of the mission’s opening landing attempts tomorrow.

The first of these attempts will result in a closure of Atlantis’ Payload Bay Doors at 5:57a.m. EST Friday morning. If all conditions are acceptable, Atlantis will perform her deorbit burn maneuver on Orbit 171 at 8:37a.m. before orienting herself into the proper entry attitude.

For this first landing opportunity, Atlantis will cross into Florida air-space around the Fort Myers/Naples area and jog just west of Lake Okeechobee before making a north-easterly turn toward the Kennedy Space Center.

Atlantis will then perform an approximately 290-degree right overhead turn to align with Runway 33 at KSC, before touching down at 9:44a.m. Should the first landing opportunity be unavailable, Atlantis and her crew have a second opportunity on Friday morning.

This opportunity would see Atlantis cross into Florida air-space over the city of Tampa, before passing just south of Orlando en route to the Kennedy Space Center.

Atlantis would then perform an approximately 270-degree right overhead turn to align with Runway 33 for a touchdown at 11:19a.m.

As with all Space Shuttle missions, the orbiter must be thermally conditioned prior to reentry to Earth’s atmosphere.

Depending on the time of year of the mission (specifically, times when the beta angle between the sun and orbiter on a given date is too large), the ability to maintain certain temperature limits on various parts of the orbiter can prove difficult through standard thermal conditioning processes – namely, orienting the orbiter’s underbelly away from the sun.

Specifically, this thermal control becomes a concern when the beta angle exceeds 60-degrees.

To counter this issue, the Space Shuttle Program has – for some time – operated under a Flight Rule which mandates Passive Thermal Control for 10-hours prior to reentry when the beta angle exceeds 60-degrees.

Currently, the beta angle for Atlantis is below 60 degrees and will remain so through Saturday.

Therefore, should Atlantis land on Friday or Saturday (known in flight terms as End Of Mission (EOM) and EOM+1, respectively), this particular concern will not manifest.

However, should Atlantis, for whatever reason, remain on orbit after Saturday, the beta angle for EOM+2 and EOM+3 does exceed 60 degrees. 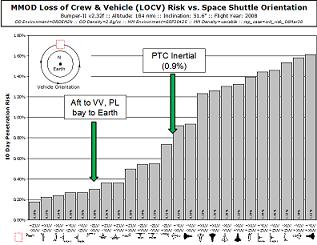 However, any change to the pre-mission baselined attitudes of Atlantis will have an effect on the overall risk posed to the vehicle from MMOD (Micro-Meteoroid Orbiting Debris).

To this end, part of the Thermal Control System division’s options for thermal control included calculations for the updated risk numbers for Atlantis.

In all, there were three options for EOM+2 and EOM+3 thermal control. The first such option would see Atlantis fly 10 hours of a -ZLV -XVV orientation on EOM+2 and 10 hours of PTC on EOM+3. This option would only increase the overall mission MMOD risk by 8 percent to 1 in 276.

The final option would see Atlantis fly 10 hours of PTC on both EOM+2 and EOM+3. This option carries the highest risk and increases the MMOD risk by 16 percent to 1 in 257.

After final analyses were complete, the decision was made that, should Atlantis remain on orbit past Saturday, Option 3 would be preferred based on its “high performance in terms of stress, loads, and dynamics.”

While this option does carry the greatest MMOD risk increase, the increase is still well within the 1 in 200 guideline set by the Space Shuttle Program and is thus acceptable for implementation on STS-129.

Currently, should Atlantis remain on orbit into Sunday, the Mission Operations Directorate has planned 11 hrs of PTC on EOM+2 and EOM+3 – one hour greater than the Flight Rule mandates due to crew sleep timing constraints.

Nevertheless, due to temperature considerations for the Reaction Control System thrusters, the Nose Landing Gear hydraulic return lines, and minimum Thermal Protection System blanket and tile temperatures, the Thermal Control System division is recommending that only 10 hours PTC be performed per the currently Flight Rule.