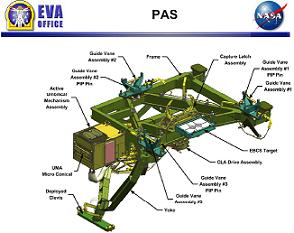 STS-129 Spacewalkers Michael Foreman and Randolph Bresnik have concluded the second of three EVAs, which has been slightly replanned due to the success of EVA-1 and alarms on Station. Meanwhile, engineers have cleared Atlantis for a contingency redocking with the ISS – in the event of damage being found during post-undock Late Inspections – following an incident relating to the ring alignment on the Orbiter Docking System (ODS).

The crews of STS-129 and the ISS were woken for the second consecutive night by a false depressurization alarm, caused by a troublemaking Russian Poisk module (MRM-2). The newly arrived module is believed to be sending out the false indication, although engineers are still working on the cause.

The alarm sounded at 9:53 p.m. EST, more than two hours after Atlantis’ crew went to sleep for the night. Emergency procedures required the spacewalkers to move out of the airlock while teams on the ground verified that the alarms were false.

As a result of the rude awakening, Foreman and Bresnik’s campout procedures were changed, in order to prepare their bodies for what is currently planned to be a six hour EVA. This involved the duo hitting exercise equipment on station, to aid the removal of nitrogen from their bodies.

Around 30 minutes of get-ahead tasks were deleted from the timeline as a result. Regardless, EVA-2 still managed to throw the timeline out of the airlock, as the duo flew through the tasks in had, which already included the deployment of a Payload Attach System (PAS) planned for EVA-3, still on the second spacewalk’s tasks, along with the pre-planned work.

The original PAS deploy – which was planned for EVA-2 – has already been conducted via the opening spacewalk of the mission, after the spacewalkers managed to complete all their original tasks with two hours to spare.

With all the tasks completed after about four hours, controllers asked the spacewalkers to press ahead with the one remaining PAS on the inboard Nadir section of the Station. That task was also completed with time to space.

“Put Mike Foreman of the US Navy done for three PAS’ on two EVAs,” Bresnik was heard saying, as Foreman went on to check connector pins on the SGANT cables that were installed on EVA-1. An Articulated Portable Foot Restraint (APFR) was also located, as the duo completed the beefed-up EVA in just over six hours in a brilliant spacewalk.

Atlantis nominal docking on Wednesday came after engineers cleared a minor ring alignment issue on Atlantis’ Orbiter Docking System (ODS). No issues have been reported since, although for the purpose of due diligence, engineers have presented their findings to the Mission Management Team (MMT). 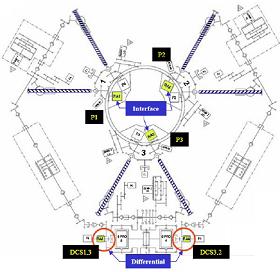 “Description of Anomaly: Docking ring lost alignment during ring extension at approximately 23 percent ring linear advance,” outlined the MMT presentation (L2). “During Docking Ring Extension, Ball Pair Ball Screw No 3 Linear Advance lagged behind the other ball screw pairs at initiation of ring drive (MET 1/02:00:43) and appeared to be “stuck”. The maximum delta position between petals 1 and 3 was 2 percent, causing the ring to lose alignment.

The ODS hardware, which is the original system that was designed for Atlantis’ ISS missions, was built with the assistance of Russian engineers – who are regularly involved in any engineering challenges related to the system. They were consulted after the ring alignment issue was noted on orbit. 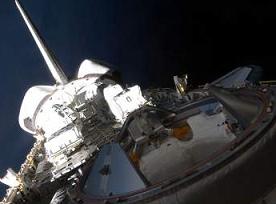 Docking proceeded without issue, and undocking will not be of any concern – as ring drive operations will not be involved. However, engineers also cleared the system in the event of redocking with the ISS – which would only be initiated in the event Atlantis has to return to Station in a Safe Haven scenario.

Such a scenario would only occur if serious damage was found during the post-undock Late Inspections, meaning Atlantis would need to return her crew to Station to wait for the Launch On Need (LON) vehicle, Endeavour, to launch next year to pick up the STS-129 crew.

Such a scenario is extremely unlikely, especially due to the excellent condition of Atlantis’ Thermal Protection System (TPS), via FD2 and FD3 inspections.