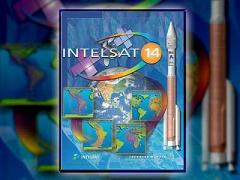 A United Launch Alliance (ULA) Atlas V has launched at the second attempt with the Intelsat 14 communications satellite. Launch was delayed several times in the count due to upper level wind data requirements – eventually lifting off at 01:55am Eastern. The successful launch followed a scrub and rollback to repair a ORCA (Ordnance Remote Control Assembly) a week ago.

The Intelsat 14 spacecraft is a communication satellite which will be placed in geosynchronous orbit at a longitude of 45 degrees west. It carries sixty-two transponders, which will be used to provide coverage of Africa, America and Europe. It will replace the nine-year old Intelsat 1R satellite, which was launched in 2000 as PAS-1R, and was operated by PanAmSat up until its merger with Intelsat.

Although it still has six years left until the end of its design life, it is losing power due to fogging of its solar concentrators, a design flaw which has affected a number of BSS-702 satellites.

Intelsat 14 was built by Space Systems/Loral under a contract signed in 2007, and is based on the 1300 bus. It will be the 112th satellite to be operated by Intelsat, including two Horizons satellites, and a number of spacecraft acquired after launch, but excluding leased capacity on other companies’ satellites.

In addition to its commercial communications payload, Intelsat 14 will also carry an experiment for the US Department of Defense. Internet Routing in Space, or IRIS, is a technology demonstration project which will allow the satellite to perform IP routing rather than requiring a ground station to do so, thereby increasing the efficiency of the system.

It is a Joint Capability Technology Demonstration mission, which is being conducted in cooperation with Intelsat, and Cisco Systems, who produced the payload. Although it was originally designed for a three month mission, the experiment’s duration has already been extended to fifteen months.

The rocket which will launch Intelsat 14 is Atlas V AV-024. It will fly in the Atlas V 431 configuration, which features a four metre diameter payload fairing, three Aerojet solid rocket motors, and a Centaur upper stage in the single-engine configuration which has been used for all Atlas V launches to date. The launch is being conducted by United Launch Alliance, under a commercial launch contract with Lockheed Martin.

At T-2.7 seconds, the first stage RD-180 main engine will ignite, followed at T+1.1 seconds by the solid rocket motors, at which point AV-024 will lift off from the launch pad. The solids will burn until just under two minutes and nine seconds after launch, before burning out and separating from the vehicle.

Four minutes and twenty seven seconds into the flight, the first stage will shut down, an event known as Booster Engine Cutoff, or BECO. Six seconds later stage separation will occur, and following a further ten seconds of coasting, the Centaur’s RL10 engine will ignite to begin the first of two burns. Eight seconds after the RL10 ignites, the payload fairing will separate from around the spacecraft.

The first burn will last for thirteen minutes and forty one seconds. Once it has been completed, the RL10 engine will shut down, and AV-024 will begin a ninety five minute coast phase. Due to the extended nature of this coast period, a white coloured Centaur is being used instead of the normal orange one, in order to provide better thermal protection.

One hour, fifty three minutes and twenty four seconds after launch, the Centaur will restart to begin its second burn. This will last about eighty six and a half seconds, and will complete the powered phase of the launch. After cutoff, the upper stage and payload will coast for a further three minutes and six seconds, before Intelsat 14 separates from the carrier rocket into a geosynchronous transfer orbit to begin its independent flight. It will use an R-4D-11 engine to raise itself to geosynchronous orbit.

Rollout of AV-024 from the Vertical Integration Facility to Space Launch Complex 41 occurred on Thursday. The vehicle, stacked atop a mobile platform, departed the VIF at around 13:00 GMT (08:00 local), and arrived at the launch pad about an hour later.

Space Launch Complex 41 (SLC-41) was built, along with nearby SLC-40, in the 1960s for the Titan III programme. The first launch from the pad, of a Titan IIIC, occurred in December 1965. It was the first complex to be converted to accommodate the Titan-Centaur, and as such was the launch site for the Helios probes to investigate the Sun, the Viking missions to Mars, and the Voyager probes to the outer planets.

After the retirement of the Titan III, SLC-41 was converted for use by the new Titan IV, which made its maiden flight from the complex in June 1989, and continued to use the pad for ten years, until 1999. The last two Titan IV launches from the pad both failed. In 1999, following the last Titan launch from the pad, work began to convert SLC-41 to an Atlas V launch pad. The towers which had been used to support Titan launches were demolished that October.

Today’s launch will be the nineteenth for the Atlas V, since its maiden flight in 2002. It will be the second to use the 431 configuration, after Inmarsat-4 F1 which launched on AV-004 in 2005. All Atlas V launches to date have been successful, with the exception of the launch of NRO L-30R, or USA-194, which was a partial failure.

This is the fifth and final Atlas V launch to be conducted in 2009, which will make it the rocket’s busiest year to date. The next Atlas V launch will carry NASA’s Solar Dynamics Observatory, and is currently scheduled to fly in early February 2010.

Intelsat’s next launch will occur at the end of the month, when Land Launch will use a Zenit-3SLB to place Intelsat 15 into orbit. This launch will occur from Site 45/1 at the Baikonur Cosmodrome in Kazakhstan, and is currently scheduled for 21:00 GMT on 29 November. This will be followed by Intelsat 16 on a Proton in early February 2010.