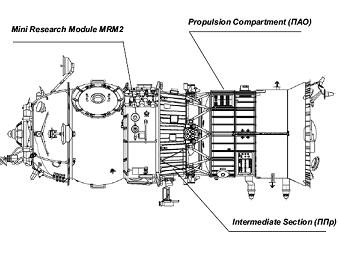 The 3,670kg module Mini Research Module-2 (MRM-2) has launched at 9:22 am Eastern on Tuesday from the Baikonur Cosmodrome in Kazakhstan on top of a Russian Soyuz-U launch vehicle. The module will become the latest addition to the Station – providing an additional docking port for Russian vehicles, an airlock for Russian-based spacewalks and a platform for external science experiments.

MRM-2 will be delivered to the ISS as a component of the “Progress M/MRM2” Cargo Vehicle/Module Complex, consisting of a total mass of 7,102kg.

“After docking and completing certain flight operations as part of the ISS, the propulsion compartment and intermediate section will separate from the MRM2 at the interface and will perform controlled deorbit and reentry operations,” outlined one of two presentations on the MRM-2 overview.

“The purpose of MRM-2 is to: Add to the station a specialized compartment with EVA capabilities during ISS RS operation. Conduct scientific research. Serve as an additional port for docking and operating Soyuz and Progress vehicles while mated to the station.”

Docking with the ISS is due on the 12th, providing Station with a twin to DC-1.

“Twin of DC-1; Docks using a Progress Instrument/Service Module which will be de-orbited after ULF3. MRM2/SM Zenith interface has a larger diameter docking ring then standard, but otherwise docks like a Progress,” added the ISS Agency Level FRR presentation.

“Primary differences between MRM-2 and DC1: Payload system for conducting space experiments has been incorporated. The atmosphere revitalization system has the capability to provide vacuum support for payloads.”

A docking monitoring target – for the visual monitoring of Soyuz vehicle automatic docking – has also been incorporated for this addition to Station, which will be the first docking to the SM Zenith port. 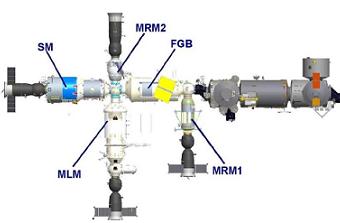 “A different type of interior lighting devices is being used, and the caution and warning panel has been replaced by the multifunction indicator panel.

“Significant work has been completed to prepare for this docking. RS EVAs 20, 22, and 23 installed the docking target, KURS antenna and cables, and relocated the docking cone respectively.

“33P Re-Rendezvous test verified this work was successful, completing a dry run of MRM2 rendezvous. Update to SM 8.03 software. Prior to docking a visiting vehicle at the new port additional outfitting must occur post MRM2 docking to establish communication between the ISS and MRM2.”

The FRR materials also noted that contingency/emergency procedures are in place, in the event of a problematic approach to the ISS.

A companion module, the Mini Research Module-1, is set to be carried to orbit on space shuttle Atlantis’ STS-132 mission, targeted to launch in May 2010. That module will be robotically attached to the Station’s Zarya module.

STS-132 will be the 132nd flight of the Shuttle Program and the 34th shuttle flight dedicated to construction and outfitting of the International Space Station. The 11+1+2 day flight of Atlantis will utilize External Tank 136, Reusable Solid Rocket Motor set 111, Solid Rocket Booster BI set 143, and operational software OI-34. 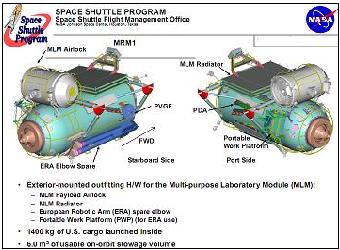 The primary payload for the mission remains the Russian Mini-Research Module 1 (MRM-1) and Integrated Cargo Carrier – Vertical Lightweight Deployable (ICC-VLD) pallet. The MRM-1 will be mounted toward the aft of the payload bay while the ICC-VLD will be berthed in the center for both launch and reentry.

Packed onto the MRM-1 will be several module-specific items as well as spare parts and a portable work platform, as outlined in the PRCB baseline presentation – available to download on L2.

Among the various items attached to the outside of the MRM-1 will be several pieces of outfitting hardware for the MRM-1’s Multi-purpose Laboratory Module (MLM). These items include the MLM payload airlock, the MLM radiator, a spare elbow assembly for the European Robotic Arm (ERA), and the Portable Work Platform for the ERA.

In addition to its externally mounted payloads, the MRM-1 will carry approximately 1,400 kilograms of internal U.S. supplies to the ISS. After MRM-1 is installed, the total usable stowage volume available to Expedition crewmembers will be 6.0 m3.