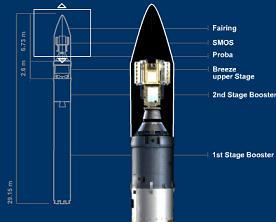 ESA’s Soil Moisture and Ocean Salinity (SMOS) and Proba-2 (PRoject for OnBoard Autonomy) satellites have launched on a Russian Rockot vehicle – a converted SS-19 Intercontinental Ballistic Missile (ICBM) – from the Plesetsk Cosmodrome in northern Russia. Launch was on time at 2:50am Central European Team (CET).

Situated in the Archangel region of Russia, Plesetsk is Russia’s most northerly rocket base, used to place mainly military satellites into polar orbits, and the only orbital launch site located within European territory.

Surrounded by Taiga forest on the eastern banks of the Yemsta River, Plesetsk was founded as the world’s first operational intercontinental ballistic missile base.

At the end of the 1950s, four launch complexes were built there for the Semyorka R-7 launcher that continues today as the Soyuz manned vehicle.

In the early 1960s Russia needed a launch site that could reach militarily useful polar orbits inaccessible from Russia’s main site at Baikonur in Kazakhstan.

Until 1983, the very existence of Plesetsk was a state secret, but after the end of the Cold War it was opened up for commercial launch services. Today, Soyuz, Cosmos-3M, Rockot and Tsyklon vehicles are flown from Plesetsk. ESA’s Earth Explorer gravity mission, GOCE, was launched from Plesetsk in March 2009.

The adaptation of the SS-19 uses the original two lower liquid propellant stages of the ICBM in conjunction with a third stage for commercial payloads called Breeze KM, optimised for delivering up to 1950 kg into low Earth orbit.

Around 150 of the SS-19 missiles were declared as excess in military terms by the Strategic Talks on Arms Reduction Treaty (START) agreements signed by the US and the Soviet Union in 1990 and 1991, but were permitted to be reused as civil launchers.

The SS-19 ICBM has flown over 140 times, with three failures, early on in its operational history. Rockot began commercial launches in 2000 and has since flown eight times, seven of which were flawless.

The October 2005 launch of ESA’s CryoSat failed when the control system in the Breeze upper stage did not execute the command to shut down the second stage’s engine. All Rockot launches were suspended until the cause was identified.

Corrective measures for Rockot’s return-to-flight were taken for the South Korean Kompsat-2 Earth observation satellite launch, which was successful in July 2006. In March 2009, ESA’s Earth Explorer satellite GOCE was launched into low orbit by a Rockot lifting off from the Plesetsk Cosmodrome.

The overall launch vehicle length is 29 m; the launch lift-off mass of the rocket is 107 t. The external diameter of the first, second and third stages is 2.5 m; the payload fairing has an external diameter of 2.6 m and a height of 6.7 m. The veteran Breeze-M Upper Stage will be carrying out the bulk of the work once in space.

The SMOS mission was to fly and demonstrate an instrument that would measure microwave radiation emitted from Earth’s surface within the ‘L-band’, around a frequency of 1.4 GHz. This frequency provides the best sensitivity to variations of moisture in the soil and changes in the salinity of the ocean, coupled with minimal disturbance from weather, atmosphere and vegetation cover.

In order to achieve the spatial resolution required for observing soil moisture and ocean salinity, the laws of physics mean that to take measurements in L-band, a huge antenna would have been required – too big for a satellite to carry. To overcome this challenge, the Microwave Imaging Radiometer with Aperture Synthesis (MIRAS) instrument was developed. 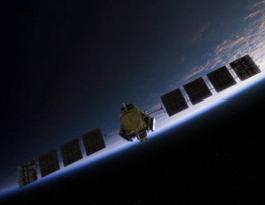 With SMOS, the size of the antenna needed has been simulated through 69 small antennas, distributed over the three arms and central hub of the instrument.

The three deployable arms are folded up for launch, but once SMOS is in orbit each of the arms fold out into an unusual three-pointed star shape. Hence, with a diameter of eight metres, MIRAS is often dubbed a ‘star in the sky’.

The 69 antenna elements, called LICEFs, are antenna-receiver integrated units, each measure radiation emitted from Earth’s surface at L-band. One LICEF antenna weighs 190 g, is 165 mm in diameter and 19 mm high.

MIRAS was built by a consortium of over 20 European companies led by EADS-CASA Espacio in Spain. The SMOS instrument will be carried on a generic platform called ‘Proteus’, which was developed by the French space agency CNES and Thales Alenia Space.

The platform is small, occupying just one cubic metre and acts as a service module to accommodate all the systems required for the satellite to function. In launch configuration, the overall dimensions, including the SMOS instrument, fit into a cylinder 2.4 m high and 2.3 m in diameter. The satellite weighs a total of 658 kg, where the platform weighs 303 kg (including 28 kg of fuel) and the instrument accounts for 355 kg.

After launch, when the satellite has separated from the launcher, the platform’s two symmetrical solar arrays are deployed automatically. These arrays are covered with silicon cells to generate power. Each array is made up of four panels, measuring 1.5×0.8 m each. Since the orbit is Sun-synchronous, the solar arrays remain static.

Proteus uses a GPS receiver for orbit determination and control, which provides satellite position information. It has a hydrazine monopropellant system with four 1-Newton thrusters mounted on the base of the satellite.

The Proba satellites are among the smallest ever to be flown by ESA. Proba-2 is the second of the series, building on nearly eight years of successful Proba-1 experience.

Proba-2 is a 0.6×0.6×0.8 meter, box-shaped structure with two deployable solar panels and a nominal weight of 130 kilograms. The primary mechanical structure consists of three aluminium honeycomb panels arranged in an H configuration and a bottom panel that acts as the interface to the launch vehicle. Almost all the satellite system units are mounted on these inner panels. 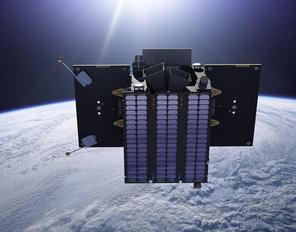 Autonomous navigation is enabled with GPS position determination and orbit propagation. All the required navigation and manoeuvring computations are performed onboard.

A single resistojet thruster, capable of producing a thrust of 20 mN, is being used for orbit adjustment. The thruster uses xenon as the propellant gas and, as the xenon supply is depleted, the tank is repressurised with nitrogen from a solid-state gas generator.

The Proba satellites are part of ESA’s In-orbit Technology Demonstration Programme, missions dedicated to the demonstration of innovative technologies. In-orbit demonstration is the last step on the technology development ladder. New technology products need to be demonstrated in orbit, particularly when users require evidence of flight heritage or when there is a high risk associated with use of the new technology.

“PROBA was developed under the ESA General Studies Technology Programme (GSTP), which fosters the development of flight hardware,” explained Frank Preud’homme, Verhaert Space Business Unit Manager. “This allowed Verhaert Space to build up satellite engineering capabilities and to attain a competitive position on the international market for small satellites.”

In-orbit demonstration is achieved through experiments on carriers of opportunity, such as the International Space Station, or through dedicated small satellites such as the Proba series, which was created to increase the availability of flight-testing opportunities.

A total of 17 new technological developments and four scientific experiments are being flown on Proba-2, with ten European countries and Canada were involved in its construction.

“Proba-2 is the result of ESA’s commitment to technological innovation,” said Director Courtois. “This mission is serving as a testbed for a variety of new space technologies. And the next two in the Proba series, the Proba-3 formation flying demonstrator and Proba-V vegetation monitoring mission, are already in preparation.”