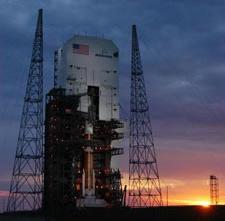 As preparations at LC-39A continue for the start of the STS-129 Countdown at 1pm local time on Friday, engineers have successfully earned Flight Rationale acceptance for the Main Engine Ignition (MEI) acoustic over pressurization issue. Also, Atlantis has gained additional launch opportunities thanks to a weather delay incurred by the Delta IV rocket team earlier this week.

At Pad-A, final preparations for Space Shuttle Atlantis’ STS-129 Launch Countdown are underway, with Orbiter Aft closeout operations culminating yesterday with the installation of the 50-1 and 50-2 flight doors.

LOX (Liquid Oxygen) and LH2 (Liquid Hydrogen) dew point and conditioning operations were completed on Monday, as was the GH2 (Gaseous Hydrogen) battery recharge operations at the pad.

All pre-countdown work is scheduled to be completed by mid-day on Friday ahead of S0007 (Launch Countdown) Call To Stations at 12:30P.M. and the start of Atlantis’ countdown at 1P.M. (1300 hours) on Friday, November 13.

Atlantis’ countdown is 4-hours longer than normal Space Shuttle launch countdowns. This is due to the need to evacuate Pad-A for 4-hours on Friday evening/Saturday morning during the launch of the Atlas V rocket from the Cape Canaveral Air Force Station.

As has been reported over that last month and a half by this site, the main constraint to Atlantis’ launch date for STS-129 has been the MRM-2 (Mini-Russian Research Module 2) launch from Kazakhstan and the Eastern Range schedule of launches off Cape Canaveral.

With the MRM-2 successfully launched – and preparing to dock to the ISS – NASA’s only launch window constraint for Atlantis/STS-129 remains the Eastern Range.

However, things have greatly improved from just one week ago, with the Delta IV rocket team announcing yesterday that they have pushed back their launch of the Department of Defense’s WGS 3 satellite to a yet to be determined date.

According to the U.S. Air Force, the launch has been postponed due to an inability to complete vehicle stacking (integrating the payload onto the rocket) because of high winds associated with the then-near-by Tropical Storm Ida.

Because of this delay, the spacecraft’s batteries now require recharging – a procedure that is being carried out at the Astrotech satellite processing facility.

As of this writing, a firm launch date has not yet been set; however, it is clear that the delay to spacecraft stacking, coupled with ongoing preparations for the launch of an Atlas V rocket at 12:48A.M. Saturday morning, will not permit a launch of the Delta IV prior to November 21.

As such, the primary constraint to the back end of shuttle Atlantis’ launch window appears to have disappeared.

Nevertheless, no official word from NASA has been received as of the writing of this article that would indicate whether or not the agency would consider/is considering launch attempts past November 17.

Currently, NASA only has the Range booked for launch attempts on November 16 and 17th – with the 16th’s attempt contingent upon the launch of the Atlas V rocket on November 14.

As always, all vehicle launch dates are fluid and subject to change at the request of management, weather violations, or technical issues.

Aside from the apparent increase of launch opportunities for Atlantis, engineers – on the whole – were getting closer to Flight Rationale acceptance for the Main Engine Ignition (MEI) Acoustics issue that came to light in recent months. UPDATE: Thursday’s Program Requirements Control Board (PRCB) meeting has accepted Flight Rationale. Documention is being acquired by L2 and another article will follow on Friday. 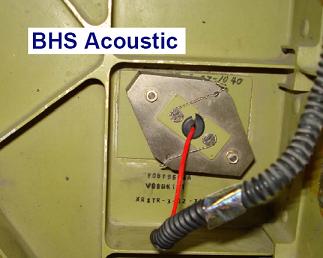 As part of the Flight Rationale acceptance analysis, the Space Shuttle Program (SSP) has requested the addition of acoustic instrumentation on the Mobile Launch Platform (MLP) and on the Base Heat Shield (BHS) of the three Orbiters.

Originally, the goal was to install this equipment prior to STS-129 using “Rapid conceptual engineering and execution using existing flight hardware,” notes a PRCB (Program Requirements Control Board) meeting presentation from November 5.

This new instrumentation – focused on an area of interest around the OMS/RCS stinger pod – has been installed to monitor the acoustic environment around the aft of the vehicle during the T-4sec through T-3sec portion of the countdown.

However, Atlantis (OV-104) does not have aft acoustic instrumentation installed in her – and installation of the needed sensors would preclude any launch of STS-129 before December 6.

In fact, the installation of this sensor in the BHS is the first of three options Safety Engineering & Integration (SE&I) compiled as part of the engineering community’s ongoing investigation of the MEI acoustic overpressure issue.

“Install acoustic sensor in the center of the BHS between all 3 SSMEs and replicate sensor installation just like OV-103 (Discovery) install.”

The data stream from this sensor would be routed through the T0 umbilicals to the MLP data acquisition equipment and would use the same signal line as OV-103’s Vertical Tail stinger acoustic did.

However, installation of this sensor on Atlantis (which would take a minimum of 12-days) would nullify any chance of making the November launch window. 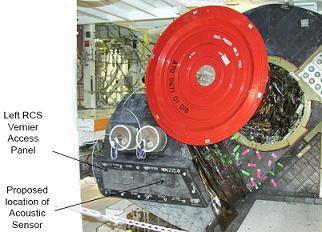 The second option outlined by SE&I relates to the installation of an Accelerometer and Government Flown Equipment acquisition box inside the Left OMS/RCS Stinger of Atlantis.

Data from this acquisition box will be downloaded post-flight, not during flight.

In all, installation of this accelerometer and GFE box will take three days and will support at November 16 launch of Atlantis.

The third option, which involves option #2 as well as the installation of an additional acoustic sensor on the outside of the stinger door, would not support a November 16 launch.

This option would use two Y – Z axis accelerometers and acoustic sensors (installed on the outside of the aft stinger door).

However, installation of the acoustic sensors on the outside of the stinger door requires “penetration hole, mounting hardware, and a new accommodating TPS tile.” As such, completion of option #3 would take 12-days and result in a launch NET December 6.

As with option #2, data from these sensors would be download post-flight.

In all, installation of all approved acoustic instrumentation onto Atlantis was completed on Wednesday ahead of final launch countdown preparations today and tomorrow.

Nevertheless, while some in the engineering community are not happy with the MEI analysis thus far (update: concern withdrawn), the latest SSP Standup notes that “On the MEI, were able to complete the model and get data validation in. Have been using STS-2 and STS-3 data.

“The model was run against the new predicted environments, and the life on the stinger attach fitting increased dramatically as well as a couple of other parts that were being looked at. All showed very good life.

“The peer review and Shuttle Logistics Depot Panel Review are still to be completed before numbers can be released, but things are looking very good and this should become a non-issue.”