STS-129: Atlantis ready to bring crew – and hardware – back home 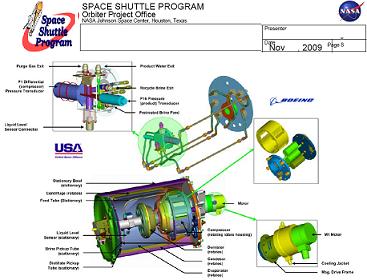 STS-129 is spending its last full day on the International Space Station, ahead of Wednesday’s undocking. Flight Day 9 is focusing on transferring the remaining items on the manifests, including the Distilliation Assembly (DA) from the broken Urine Processing Assembly (UPA) – a task that required a large amount of debate, to ensure the large piece of hardware safely heads back to Earth.

Atlantis has one new issue, according to the Mission Evaluation Room (MER) – relating to a light bulb that appears to have failed in her payload bay. That’s a sign of a healthy orbiter, as Atlantis behaves impeccably on orbit, with just hours remaining until undocking on Wednesday morning.

With one of the final transfers relating to the handover of around 1,400lbs of water from Atlantis to the ISS, the Station has benefited greatly from the STS-129 mission, from a logistical, spares and consumable standpoint.

Farewells have been taking place between the shuttle and Station crews during the day – following the morning reboost of the Shuttle/Station stack by Atlantis – including a first-of-its-kind command handover during a shuttle mission on the ISS. The Atlantis crew are set to close the hatches between Atlantis and the ISS near the end of today.

Once on Atlantis, the crew will carry out rendezvous tools checkouts on the orbiter, followed by leak checks on the Orbiter Docking System (ODS), prior to spending the night on the superstar vehicle.

Undocking early on Flight Day 10, the crew will then conduct a Late Inspection of Atlantis’ Thermal Protection System (TPS) via the Orbiter Boom Sensor System (OBSS), prior to the clearance for re-entry by the Damage Assessment Team (DAT) on the ground. A review of the DAT findings to date will be provided in an article on Wednesday.

The orbital outpost has a primary task of conducting vital and unique science on orbit, yet the challenges of maintaining the vast array of hardware – that allows its crewmembers to carry out their roles on Station – is in itself a huge learning curve for human aspirations to conduct long duration space flight.

While spares and well trained astronauts and cosmonauts can bridge certain hardware-related issues, equipment will ultimately fail at time to time. This is the case with the UPA, which is a useful element of supplying consumables to the crew, but also a new technology that has life-saving potential back on Earth.

Thrown in at the deep end of performing in space, the UPA has suffered a number of failures since arriving on Station earlier this year. In-house repairs have worked on several occasions, but now the hardware – specifically the DA – is deemed to have failed beyond the repair capabilities of the ISS’ crewmembers.

Thankfully, the United States hasn’t yet thrown away the un-rivalled downmass capability of the space shuttle, allowing for the DA to be returned – at short notice – on Atlantis, in order for engineers on the ground to examine the exact reason for its failures, while a replacement is prepared to fly up with Endeavour on STS-130 early next year.

However, firstly the DA has to be safely returned on Atlantis, which required several days of evaluations on both the packaging of the hardware, and its safe location on the middeck.

“Purpose: Gain acceptance of increase in risk of returning UPA DA in the Orbiter Middeck with reduced containment levels for leak path components for a TOX 2 substance. This briefing serves as a Safety Issues Briefing for an increase in risk for ORBI-044, Cause E,” noted Mission Management Team presentations – available on L2.

“(Program) requests return of Urine Processing Assembly (UPA) Distillation Assembly (DA) – requires two fault tolerance for all catastrophic hazards, requires that toxic or hazardous chemicals/materials shall have failure tolerant containment appropriate with the hazard level or be contained in an approved pressure vessel as defined in Fracture Control Requirements for Space Station (documentation).

“Rationale for Use of Dual Seals in the UPA for a Tox Level 2 Fluid was approved by the ISS Program manager.” 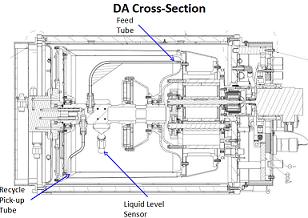 Risk assessments into ensuring the safety of Atlantis and her crew were created, in the event of the DA leaking whilst in the middeck. While the chances of the DA leaking are small, the crew would be in no danger regardless.

“Risk of external leakage is considered low. Two levels of containment: End plate QD feed-throughs use a dual seal design. QD connections have internal seals and seal in external cap. The DA is at vacuum so a leak would be internal to the DA. Minimal (if any) amount of fluids located in the lines that are exposed externally,” added the presentations.

A plan was also drawn up on how to package the DA safely, with padding used to protect the exposed external lines. It has also been located in an area of the middeck where it will avoid any potential “bumping” with other hardware during landing.

As a result of the evaluations, no increased risk was confirmed and entered into the documentation that covers “Unknown Gaseous Contamination Levels in the Cabin Causing Crew Illness/Incapacitation” safety requirements – known as ORBI 044.

The return of the DA to Earth will be another feather in the cap for Atlantis and her crew, marking yet another achievement on a mission that has surpassed all of its pre-planned tasks.

The question for the future will revolve around replacement solutions for not only the vast amount of upmass the shuttle can provide, but also the downmass ability to return hardware for evaluation and repair once the orbiters have been retired – especially if the Station is extended to 2020, without the support of the orbiters.