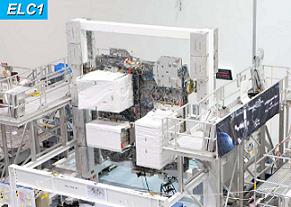 As part of NASA’s effort to stockpile the International Space Station with as many spare components as possible before the retirement of the Space Shuttle fleet, the Express Logistics Carriers are a vital part of that endeavor. With Flight Day 5 involving the removal of ELC-2 from Atlantis’ cargo bay, an interview with Boeing’s Eve Stavros explains the background behind the hardware.

FD5’s main focus was on the transfers between Atlantis and the Station, with an aim to be around 60 percent complete by the end of the day. The allowance to concentrate on transfers came after a replaned day, given no Focused Inspection is required on Atlantis – thus freeing up over 90 minutes from Friday’s schedule.

Replanning of EVA-2 – which will take place on Saturday – continued, thanks to the get-ahead task of deploying one of the Payload Attach Systems (PAS) on EVA-1.

“The STS-129 mission is proceeding nominally. Flight Day 4 (yesterday) Activities Completed: EVA-1 by Foreman and Satcher; installed the S-band antenna assembly on Z-1 truss, routed cables for the Space to Ground Antenna, lubricated the Payload Orbital Replacement System Attachment on the Mobile Base System and the Kibo Robotic Arm End Effector and finished with cable preparations for STS-130. Plus get-ahead work with the deployment of the payload attachment system that was scheduled for EVA #3.”

The ELC-2 grapple by Atlantis Shuttle Remote Manipulator System (SRMS) arm was completed in the first half of Flight Day 5, in preparation for instalment on the ISS.

Weighing in at approximately 5,000 lbs each, the Express Logistics Carriers were built under the direction of the Goddard Space Flight Center in Maryland through the Remmele Engineering company in Minnesota.

Capable of carrying over 10,000lbs of payload each, the ELCs were derived for the International Space Station using knowledge gained from past payload carriers such as the ones used during the Hubble Space Telescope repair missions in the 1990s.

Following the successful launch of the first two ELCs, I was fortunate enough to speak with Eve Stavros, Boeing Payload Flow manager for Mission STS-129.

Chris: Could you walk us through some of the processing that was accomplished here at the Kennedy Space Center for ELCs 1 and 2. 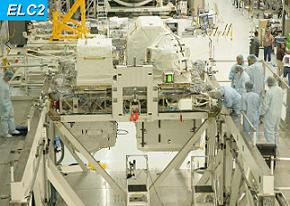 Eve: Certainly. The first, obviously, was to coordinate the delivery of ELCs themselves down here at the Cape. Once they arrived, we had to put on the electrical harnessing and the Flight Support Equipment and build them up with all the equipment we needed before we could install the Orbiter Replacement Units (ORUs). Then, we had to test, integrate, and put all the labeling on to get them ready to go out to the launch pad.

However, at the same time, we were processing the ORUs –all 14 of them. We started on the first ORU in June 2008 and worked to integrate them with their Flight Support Equipment before conducting their final electrical tests and then integrating them onto the ELCs.

Chris: If I recall correctly, ELC-2 actually arrive here at Kennedy in December 2008, before ELC-1. Why was that? Any specific engineering reason?

Eve: ELC-1 was the Flight Qualification Unit that was undergoing all of the required testing and verification up at the Goddard Space Flight Center. They had to complete that testing before they could deliver it to the Kennedy Space Center. So they delivered ELC-2 first since they still needed ELC-1 up at Goddard.

Chris: When are the expected delivery dates for the remaining two manifested ELCs? 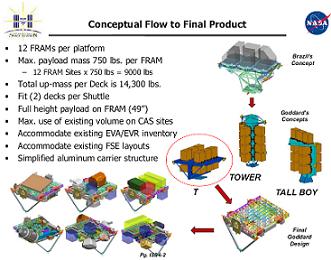 Eve: ELC-4 is here and the delivery date for ELC-3 is still under negotiation. But they are looking at a date sometime between early to mid-December for the delivery of ELC-3

Chris: How much does each ELC weigh and how much can each ELC carry?

Eve: Each ELC weighs roughly 5,000 lbs and is capable of carry much more than what the ELCs on STS-129 are currently carrying. Basically, if you loaded two ELCs to their maximum capacity and put them in the Shuttle, the Shuttle would not be able to lift them.

Chris: Can you describe some of the unique processing requirements here at the Cape for the ELCs due to their ability to carry payload on both sides of their grids.

Eve: Certainly! We didn’t have the capability to rotate the ELCs with any of our existing ground support hardware here at the Cape so we had to design and build a work stand that could rotate the ELCs. And not only rotate the ELCs but also be able to remove the ELCs from the rotation device in an upside down configuration.

That way we could get one ELC out of the rotating equipment and put another ELC in there to start processing it. In fact, that rotation machine is actually operated by one engineering who uses an electrical drill to manually turn the gears that in turn rotate the ELC. 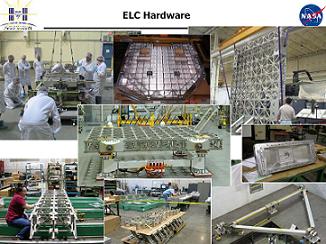 Chris: As I understand, there are two locations on each ELC capable of supporting powered scientific experiments once on orbit. Now, obviously with the Shuttle Program coming to close, the addition of the ELCs to the Station appears to be permanent, but where the ELCs designed with the ability to be brought back from space on the Shuttle for refurbishment and re-flight?

Eve: Yes, they were. In fact, a previous version of the manifest had an ELC coming back on a Shuttle flight, being refurbished here at Kennedy, and then re-launched to the Station with just one ORU installed on it.

Chris: One of things that struck me as I was reading the manifest of ORUs on ELCs 1 and 2 is the dual nature of some of those payloads. For instance, there are two pump modules and two Nitrogen Tank Assemblies. Can you describe some of the challenges the Boeing team faced in getting these payloads together… when, in the past, they’ve only had to process one pump module or one Nitrogen Tank Assembly at a time.

Eve: A couple of the challenges were that some of the ORUs that we launched – the Nitrogen Tank Assembly in particular – were ORUs that came back on ULF-2 (STS-126). So we had to wait at KSC while that ORU was sent to Houston for refurbishment before it was sent back here for the ULF-3 flight. So, in some cases, we were waiting for hardware to undergo post-flight and then pre-flight processing. 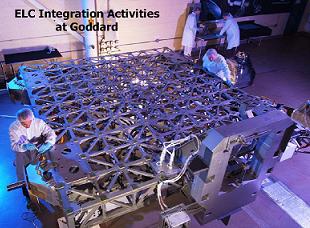 Additionally, there was new Flight Support Equipment that we had to build because not all of the necessary equipment had been built for every single ORU. There was also some new manufacturing hardware that had to be built and then delivered.

Chris: One last question: what do you think the biggest engineering triumph was for the teams in getting ELCs 1 and 2 processed for the same flight?

“And that really is – coming from different organizations around the country and around the world – a bringing together of more than 15,300 pieces of hardware here at the Kennedy Space Center in less than a 15-month period. That’s pretty amazing! We’ve got a hardworking team here.”