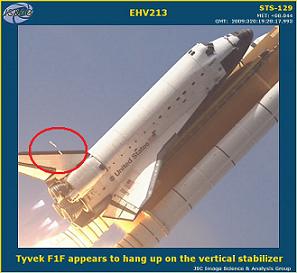 Spacewalkers Mike Foreman (EV1) and Robert Satcher (EV2) have completed the first of three EVAs on Flight Day 4, with tasks including installing a spare communications antenna, routing cables and lubricating parts of the mobile base system and Kibo robotic arm. Meanwhile, the Damage Assessment Team (DAT) have confirmed Atlantis will not require a Focused Inspection on Flight Day 5.

Atlantis is continuing to perform without any issues of note, with the only addition to the Mission Evaluation Room (MER) “funny” (their word for minor issue) report relating to power issue with one of the onboard laptops – which was soon rectified.

“PDIP-2 Transient Power Loss – during robotic ops, power to a laptop was temporarily lost,” noted the latest MER list. “The crew power cycled the panel switch and circuit breaker and power was restored.”

The mission is on the timeline, following Wednesday’s docking to the International Space Station. The unberthing of the ELC-1 payload was also completed, along with the opening transfers between shuttle and station – and ongoing transfers from the recently arrived Russian MRM-2.

Thanks to the clean performance of External Tank ET-133, the potential for foam liberation related damage on the orbiter was of no real concern even prior to Flight Day 2’s opening inspections, along with the additional imagery that resulted from Wednesday’s R-bar Pitch Maneuver (RPM).

Only around three foam loss events were noted on ascent footage, all of which occurred outside of the period of time where aerodynamic conditions would allow such foam losses to potentially damage the orbiter.

Although the DAT engineers had to spend slightly more time to complete their initial findings – due to issues with the standard of imagery on the ET doors of the orbiter – it has been confirmed that no Focused Inspection (FI) will be required on Friday.

Further work will be conducted on the imagery, via the Level 1, Level 2 and finally a peer review, to ensure no data has been missed – prior to the full clearance for re-entry. A final check – via Late Inspections – will be conducted after undocking.

Such was the clean nature of Atlantis’ ascent, the only ascent footage that has been reviewed via the first stage flight related a tyvek cover that managed to catch the orbiter’s vertical stabilizer during its liberation.

Orbiters are fitted with 14 of the lightweight covers, which are used to protect the Reaction Control System (RCS) thruster openings from debris and the elements whilst at the pad. They are designed to liberate from their positions between four and eight seconds of ascent, and some can be seen bouncing off the orbiter at very low velocities – which is nominal.

The cover in question liberated from the F1R thruster and can be seen travelling down the top of the orbiter (video and images available on L2), before “appearing” to hang up on Atlantis’ tail.

It was soon confirmed the cover didn’t hang up, and departed the vehicle within a very short period of time. No damage to the tail would have been caused by such a lightweight object impacting at a low velocity.

One final piece of the debris jigsaw will be forthcoming soon, as the cameras on the Solid Rocket Boosters (SRBs) are due to be reviewed in the next few days. These cameras record their footage to onboard film, which can only be viewed once the boosters have been returned to dock.

“SRB Retrieval Status: Liberty and Freedom Star are on-time for their arrival at Hangar AF dock, 0800 and 1000 EST respectively. Open assessment is scheduled for Friday at 0700 EST,” confirmed the NASA Test Director report on Thursday, meaning the SRB footage is likely to be reviewed over the weekend at the latest.

In preparation for the opening EVA of the mission, Foreman and Satcher spent the night in the Quest Airlock under campout conditions, in order to prepare their bodies for the planned six and a half hour spacewalk. Strict rules are in place for the spacewalkers as they prepare to head to the outside of the Station.

“EVA Prep/Campout protocol: ~35 minutes following campout crew wakeup and at least 8:40 since 10.2 depress was completed the night before, the airlock is re-pressurized to 14.7 psi and the hatch is opened. The EV crewmembers have 40 minutes while wearing their quick-don masks for a hygiene break and to gather breakfast,” noted campout procedures in the STS-129 EVA Flight Readiness Review (FRR) documentation.

“Finally, the EVs perform Post Depressurization where they disconnect from the Service and Cooling Umbilical (SCU), which marks the start of the PET clock. The depress pump depresses the crew lock down 3 psi after which the crew lock valves are opened to vacuum. Once depress is complete, the EVs egress the crew lock and begin EVA setup.” 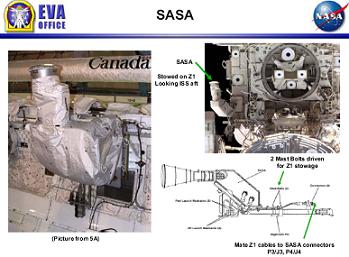 A variety of tasks are on tap for the spacewalkers, with the focus on the installation of the SASA (S-Band Antenna and Support Assembly) on P1. They will also route cables for the Space to Ground Antenna (SGANT), lubricate the Payload Orbital Replacement System Attachment on the Mobile Base System and the Kibo Robotic Arm End Effector, before concluding with cable preparations for next year’s STS-130 mission carrying Node 3 and Cupola.

“Big Picture and EVA 1 Overview: Today is the first EVA. The crew will install the SASA onto Z1 and apply heater power. SASA is currently on the sidewall of the Payload Bay,” noted the FRR walkthrough of EVA-1.

After installation, the SASA will become available for ISS’s spares. During this work, the S-Band string 1 will be powered off and made unavailable as an inhibit while crew is planned to be in the KOZ (Keep Out Zone). Checkout will occur after the EVA, requires string swap to string 1. 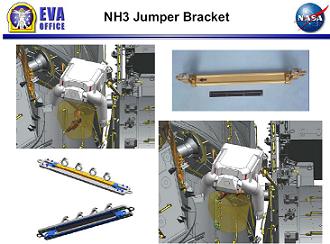 “After SASA install, EV1 will route the SGANT Cable for STS-130. He will also install an NH3 Bracket and reposition the FGB LAN connector on N1 and tie down the MMOD shield in preparation for 20A. EV2 will be busy lubricating the POA LEE snares and JEM RMS LEE (Latch End Effector) Snares,” added the FRR notes.

“SGANT Cable Routing: Pre-positioning cables and bracket for future spare SGANT A Y-cable is being inserted in RF line between ISS UHF radio and P1 UHF antenna. Big loop will be temporarily broken while ISS UHF radio is powered off as an inhibit during cable connection.

“S0/P181 Connector Troubleshooting: Connector is part of Node 3 jumper required for 20A. Attempts to mate it during 17A were unsuccessful. New, universal keying connector adapter flying on ULF3 to bypass the keyed adapter on S0 the panel.”

The EVA was successfully completed after 6 hours 37 minutes, including a get-ahead task of one of the three final deployments of the PAS’ (Payload Attach Systems) – which was originally scheduled for EVA-2.