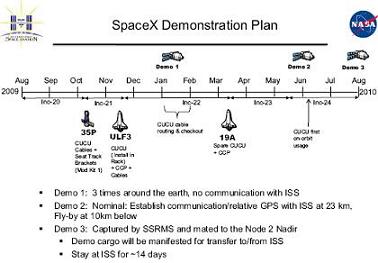 When STS-129 launches next week, Atlantis will have one eye on the future, as she carries the CRS UHF Communication Unit (CUCU), a key element for the upcoming demonstration of SpaceX’s Dragon capsule, ahead of its debut arrival at the International Space Station (ISS) in 2010.

The Commercial Orbital Transportation Services (COTS) Ultra High Frequency (UHF) Communication Unit will be riding in a middeck stowage locker on Atlantis, before being handed over to ISS crewmembers for the 2010 demonstration flights – although SpaceX’s schedule is deemed fluid.

Developed by SpaceX, in collaboration with NASA, the unit allows for communication between the ISS, Dragon and ground-based mission control. The system also allows the ISS crew to monitor an approaching or departing capsule.

According to NASA documentation at the end of October, Demo 1 is currently classed as a January, 2010 flight, though it is expected to slip to February.

This flight will be based around Dragon carrying out three orbits of the Earth – which will be solely aimed at testing the capsule’s abilities.

This demonstration won’t involve communications with the ISS, and as a result may be classed only as a Dragon test – as opposed to a specific COTS related demo – which might explain why SpaceX are classing the upcoming F9 launch as unrelated to their COTS commitments.

Demo 2 – currently scheduled for June, 2010 – will ramp up the testing of Dragon, including the first test relating to the ISS, as the capsule establishes communication and relative GPS with ISS at 23 km, before carrying out a fly-by at 10km below the Station.

Demo 3 – currently scheduled for August, 2010 – will mark Dragon’s debut rendezvous and capture at the ISS, with the Space Station Remote Manipulator System (SSRMS) transitioning the capsule for mating to the Node 2 Nadir port. Demo cargo is yet to be manifested for transfer to/from ISS during its 14 day stay on Station.

Due to the communication’s system ride on Atlantis, notes on the SpaceX hardware were included in STS-129’s ISS Agency level Flight Readiness Review (FRR) presentation – available on L2.

“CUCU was developed by SpaceX through Space Act Agreement (SAA) to demonstrate proximity communication between Dragon and ISS,” noted the presentation. “First component launching to initiate set up of SpaceX Dragon to ISS interface in order to support the SpaceX Dragon missions.

“CUCU provides a bi-directional, half-duplex communications link between Dragon and ISS using existing ISS UHF Space to Space Station Radio (SSSR) antennas, which provides a communication path between MCCX (SpaceX) and Dragon during proximity operations and a command security between ISS and Dragon.

“Unit packaged in a locker to be mounted inside a rack on ISS and connected to ISS data, audio, and UHF antenna resources – provides a separate Crew Command Panel (CCP) for crew interface to Dragon.”

As with all new vehicles that have aspirations to approach to the ISS, strict rules and certifications need to be approved and constantly reviewed. SpaceX were well aware of this requirement, as noted by Gwynne Shotwell, President, SpaceX.

“The unit had to pass NASA’s strict ISS safety standards and reviews, demonstrating our progress under the COTS program and laying the groundwork for future F9/Dragon flights to resupply cargo and possibly crew to the ISS when Shuttle retires.” 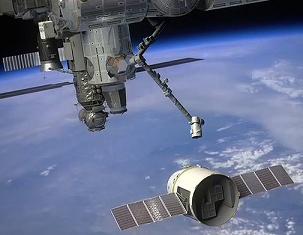 From NASA’s standpoint, the system is ready for its role on the ISS, following a year of qualification and certification reviews, prior and after its arrival at the Kennedy Space Center in September.

With cabling and seat track brackets – part of mod kit 1 – already delivered to the Station via the Russian Progress resupply ship 35P, integration and checkout of the communication unit is scheduled to take place in January of next year.

This will the second time an orbiter has provided assistance to SpaceX, following Endeavour’s role with the DragonEye (DE) Detailed Test Objective (DTO) box – with flash LIDAR and data acquisition unit – during STS-127.

DragonEye provided three-dimensional images based on the amount of time it takes for a single laser pulse from the sensor to the reach a target and bounce back, providing range and bearing information from the Dragon spacecraft to the ISS.