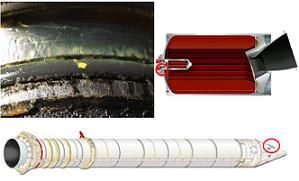 Shuttle managers have concluded the key review of STS-129’s mission, in turn providing a baseline for STS-130’s Flight Readiness Reviews (FRRs). The STS-129 IFA (In Flight Anomaly) review provided an in-depth post flight overview of all shuttle hardware, from the orbiter, to the External Tank, Space Shuttle Main Engines, and boosters – the latter of which received a glowing report on their performance.

ATK, the manufacturer of the Reusable Solid Rocket Motors (RSRMs), recently built the final motor segment that is scheduled to fly with the shuttle, at least based on the current plan that provides for five missions – and one specific LON (Launch On Need) mission that is being evaluated as STS-135.

RSRM Motor Set “RSRM-108” flew with Atlantis during her highly successful STS-129 mission – the fifth and final launch of 2009 – powering the vehicle and her six crew during the first stage of ascent.

“All RSRM countdown parameters were within LCC (Launch Commit Criteria)/OMRS (Operational Maintenance Requirements and Specifications) limits and within family. Overall performance of both RSRM motors and all ATK BSMs excellent and well within limits. No (full) IFAs declared at this time,” noted the ATK IFA Review of STS-129 – one of 12 presentations available on L2.

Only six minor IFAs – or Squawks as they are known in the world of boosters – were listed on the presentation, as engineers progress through milestones that include a L+45 day report “project goal” for potential refurbishment tasks.

“Overall performance of both STS-129 (RSRM-108) motors and ATK BSMs (Booster Separation Motors) were excellent. Postflight evaluation is still in work,” added the presentation. “Six Squawks have been written and are being reviewed. No (full) IFAs declared at this time but additional postflight disassembly and evaluations are still in work.”

The Squawks are items that are out of family observations, found by engineers after the boosters were towed back from the ocean and placed under assessment, once pulled out of the water in Port.

While the process relates to the next flight’s FRR – with IFA notes always providing a baseline status during departmental, Space Shuttle Program (SSP) and the final Agency level FRRs – the lessons learned add to the experience base that will be priceless for flights even after the shuttle is retired – with the Ares program also utilizing the motors.

Even if that program is cancelled, it is highly likely NASA will move to a vehicle that will use these motors, as they aim to protect against further job losses from the shuttle-related contractor workforces that are being decimated by the retirement of the shuttle program.

All six Squawks are listed on the ATK presentation for the RSRM’s performance during STS-129, all of which shows the amount of detail the engineers go to when reviewing the hardware post flight.

“The material was observed in multiple areas, including on an O-ring and in the O-ring grooves. Lab results indicate that the material is yellow chromate primer.”

Brown stains on painted cork surface were also observed on the center Field Joint Protection System (FJPS), which included seawater materials – showing the engineers also have to work out the difference between issues created from when the boosters are in the air, and those caused by their interaction with the ocean after splashdown.

“Numerous brown stains were identified on the center cork run of the center Field Joint Protection System (FJPS) at approximately 331 degrees (in-board). Each stain is centered around a small paint blister and darker in appearance than typical cork stains on Acrymaxpaint. Stains determined to be deposit on the paint; mix of organic material and seawater components.” 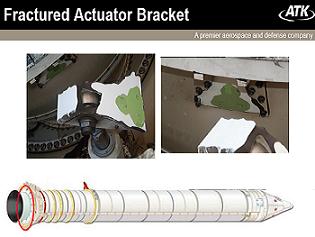 Past flight experience also came into play with a Fractured Actuator Bracket on right hand motor, which was caused by the booster’s impact at splashdown. Such observations have been seen on previous flights.

“Fractured tilt actuator bracket on the RSRM-108 RH AEC assembly. Actuator bracket damage at splashdown is an expected condition and bounded by previous occurrence and testing,” noted the presentation. “Squawk was written to document fracture condition and has been closed.”

A plugged BSM Igniter Cap Hole also made the list. The Booster Separation Motors – as their name suggests – push the boosters clear of the stack during staging, and are also the cause of the bright flash that is observed on the flight deck at separation.

“One igniter cap hole on BSM S/N 107 (RH booster) was plugged with combustion by-products and corrosion,” added the presentation. “The erosion from firing is visible, indicating that the hole was not plugged during igniter operation. The lab has verified erosion and composition.” 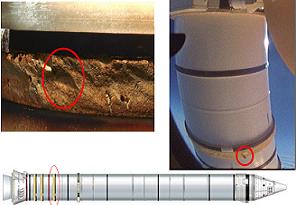 Missing foam (Thermal Protection System) on left hand forward stiffener ring was the first issue to be noted on the booster, as it was observed via the left hand ET (External Tank) umbilical well footage.

All ascent footage is reviewed shortly after launch by the Damage Assessment Team (DAT) and in this case was immediately cleared as a concern due to the lack of mass of the liberated foam – which would come into play in the unlikely event the debris may have impacted on the orbiter. Regardless, it is understood no impact occurred.

“During Orbiter onboard film review, SRB/RSRM Postflight Assessment was notified that a small piece of foam was liberated from the forward stiffener ring on the LH motor at around 300 degrees,” the presentation noted.

The final Squawk related to a suspect flashing on right hand Igniter Outer Gasket Seals located near the top of the motor. This was note deemed as no concern for flight, as ATK noted the flashing did not violate the seal footprint. However, this is the “highest” rated Squawk on the list and will kick-start corrective actions. 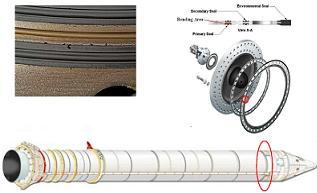 “During detailed gasket assessment, suspect flashing was observed on the primary and secondary seal surfaces of the RH outer gasket,” the presentation noted.

“Flashing is not material specific and is seen after the molding process of both gasket configurations. Cause and corrective action for V1288 gaskets will be directly applicable to V1944 gaskets. Corrective actions will be worked through existing motors.”

The excellent performance of the motors matches most of the shuttle elements, per IFA review at the December 10 Program Requirements Control Board (PRCB) meeting. Further articles will follow on other hardware reviews, such as the more-eventful External Tank review.