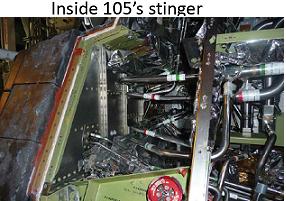 STS-130 is set to achieve its latest milestone, as Endeavour prepares to rollover to the Vehicle Assembly Building (VAB) on Friday. The youngest orbiter in the fleet will be sporting a full set of instrumentation, which will gain additional data on Main Engine Ignition (MEI) Acoustic and SSME (Space Shuttle Main Engine) Ignition Overpressure (IOP) Environments.

Endeavour was set to rollover from her Orbiter Processing Facility (OPF-2) at 7am on Saturday. However, engineers were told on Wednesday to make an effort to prepare for a move as early as Friday at 1pm local. Leak checks and closeouts have now been completed, as has tire pressurization work – ahead of the gear being raised for the final time ahead of flight.

Endeavour will be placed on top of the Orbiter Transporter System (OTS) on Thursday, ahead of the 30 minute roll into the transfer aisle of the VAB.

Once attached to the VAB crane via the sling device, Endeavour will be hoisted over for mating with the awaiting External Tank (ET-134) and twin Solid Rocket Boosters in High Bay 1 (HB-1).

The launch date remains under evaluation, based on range availability and the launch status of a Russian Progress resupply vehicle – which may result in STS-130 moving up as far as February 2. No decisions will be made until closer to the Flight Readiness Review (FRR) season.

Debuted at short notice on Atlantis for her STS-129 mission, Endeavour has received additional MEI instrumentation ahead of rollover, in what is likely to be the final data gathering effort via flight hardware.

While the majority of locations on the orbiters were cleared as no concern from these environments, a small area related to an attach point/stinger on the aft of the orbiters – located between the Orbital Maneuvering System (OMS) and Reaction Control System (RCS) – failed to clear NASA’s strict safety requirements, relating to a concern that the “stinger” may have exceeded age-life limits as a result.

Although refined models showed the stinger has a large amount of margin, with borescope inspections also showing the hardware is in good condition throughout the fleet, Space Shuttle Program (SSP) managers decided to take a closer look at the environments during launch, by adding instrumentation into the area in question.

Time constraints and access restrictions saw Atlantis fly with just the priority sensors – created from Wing Leading Edge Impact Detection System (WLEIDS) accelerometers – in the stinger area of the orbiter and on the Tail Service Mast (TSM) of the Mobile Launch Platform (MLP).

However, Endeavour’s relaxed flow for STS-130 allowed for a plan to be created that utilized the full suite of sensors, which have since been installed. 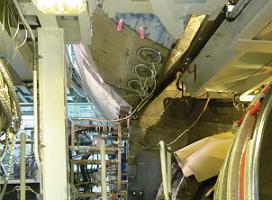 Engineers are still looking into the data gained from Atlantis, after the sensors were downloaded once the orbiter returned to her OPF. The results will determine the final plan for how many sensors to add to the MLP, though all priority sensors have already been installed on Endeavour during her recent flow.

“Joint effort between SE&I (Systems Engineering and Integration) and Orbiter to develop complimentary set of new instrumentation installed on both MLP and Orbiter. SE&I is waiting to complete the evaluation of the STS-129 data before deciding to install more ground instruments for STS-130,” added the PRCB presentation. 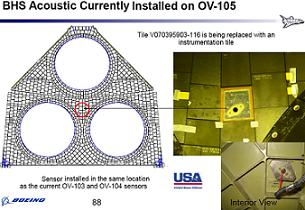 The additional sensors on the orbiter include the Base Heat Shield (BHS) area. This acoustic sensor will provide additional information, on top of the data gathered by the stinger accelometers and sensors, along with the instrumentation located in the TSMs.

“Timeframe of interest is around Launch Count Down T minus 3 or 4 seconds. Data gathering post launch is not mandatory. Area of interest is in and around OMS/RCS stinger.

Also on the wish list of the Loads Panel/Orbiter team were a set of microphones, which will feed data into the three channel WLEIDS boxes. 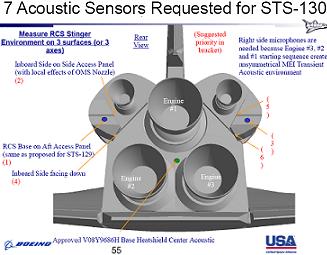 Engineers were also ready to add instrumentation on the Vertical Stabilizer, although it is understood this was not deemed necessary.

In total, seven sets of sensors have been installed on Endeavour. Three are located on either side of the OMS Pods/RCS attach points, each of which utilize three accelerometers and three acoustic sensors – feeding into two WLEIDS boxes. An acoustic sensor on the BHS makes up the seventh sensor.

Once Endeavour returns from her STS-130 mission, engineers will have two flight’s worth of data to further refine their models, and ultimately clear the orbiter as a whole from the MEI concerns for the remainder of the program.