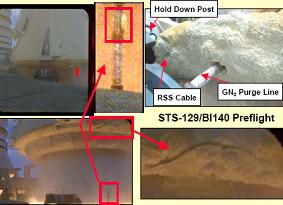 Capping off a highly successful year for the Space Shuttle Program, the STS-129 flight of Atlantis last month has undergone its final, official post-flight assessment: the all-important In-Flight Anomaly (IFA) review. In all, STS-129 was a clean flight, particularly for the vehicle’s Solid Rocket Boosters (SRBs) and Space Shuttle Main Engines (SSMEs).

During this standard evaluation, all aspects of Atlantis and the STS-129 vehicle’s performance were reviewed, with special attention given to any abnormal or off-nominal signatures of the vehicle’s multiple system.

Between the SRBs and SSMEs, only one IFA has been declared, an “aft skirt trailing edge foam crack” on one of the SRBs.

In all, the SRBs on STS-129 performed exceptionally well, with only fourteen squawks (one of those also classed as an IFA) being reported during the post-flight IFA review.

For the one IFA, the presentation notes that launch imagery revealed a “crack in froth-pak foam” of the Right Hand (RH) SRB during liftoff of Atlantis.

The foam was confirmed to be “intact” through 66-seconds Mission Elapsed Time (MET), at which point imagery resolution declined and could no longer be used to verify the integrity of the cracked foam.

“Review of processing paper [including verification of clearances] found no initial issues,” notes the IFA presentation.

An IFA was declared for this issue when the standard imagery review revealed that a portion of the foam was “stuck on a purge line after lift-off.” An investigation into this IFA is still ongoing.

The remaining 13 SRB issues identified from in-flight video, post-flight video review, and post-flight SRB inspections did not meet the NSTS definition of an IFA and are thus categorized as “squawks” – while still being included in the SRB IFA review. 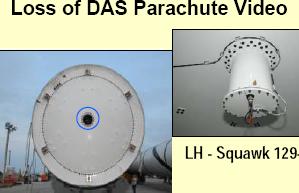 The first of these squawks to gain mention in the IFA review presentation relates to a loss of parachute video.

“Tape jam occurred at ~ L+394 seconds (or ~6.54 minutes after liftoff).” This time index corresponds to roughly the same time the Left Hand (LH) SRB impacted the Atlantic Ocean. The current plan is to return the VCR to its vendor for repair.

The next noted squawk pertained to an Experiment Dedicated Application Software (EDAS) Accelerometer Data offset that was “noted during the first 5-seconds and 30- to 70-seconds” of flight.

A second set of accelerometer data was did not suffer from the same offset condition and provided acceptable data throughout SRB flight.

The “offset is associated with accelerometer sensitivity to high Max Q structural response” and has been reproduced in an electrical lab. This offset is classed as an “understood condition” that is “part of the known signal design,” notes the IFA presentation.

The thrust oscillation data was unaffected by the data offset and all measurements in the “3 – 100 Hz range at the end of flight in [the primary] area of interest” were obtained. 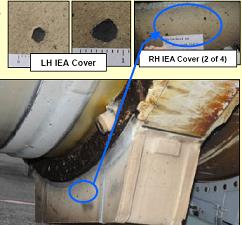 The forth item noted in the SRB IFA review was a missing piece of TPS (Thermal Protection System) material on the aft Integrated Electronics Assembly (IEA) covers for both the LH and RH SRBs.

A Materials and Processing (M&P) analysis determined that these liberations occurred during the SRBs’ descent toward the Atlantic Ocean after their separation from Atlantis’ External Tank.

Thus, this missing TPS is not a concern for flight safety.

Next on the squawk list was an area of “missing TPS/Impact on the LH aft skirt and single BSM (Booster Separation Motor).” 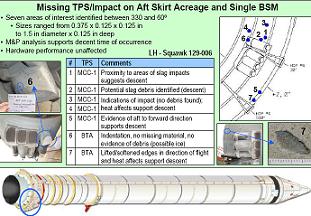 For this squawk, seven areas of interest between 330 degrees and 60 degrees on the circumference of the LH aft skirt were identified. These areas contained TPS liberations and one possible debris impact area ranging in size from “0.375 x 0.125 inches to 1.5 inches in diameter x 0.125 inches in depth.”

The sixth SRB squawk related to the loss of foam on the External Tank Attach (ETA) Ring of the RH SRB.

“Two areas with non-uniform heating on surface,” notes the presentation. The first area (dubbed Area A) was located at the 255 degrees mark on the circumference of the SRB. Area A was ~3.5 inches in diameter x 1 inch in depth. 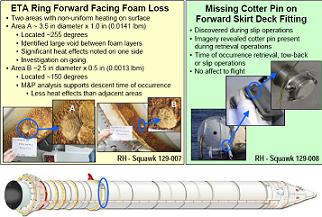 Significant heating effects were noted on one side of the ETA ring foam and large voids between the various foam layers were also identified on Area A.

An investigation is ongoing at this time. It was not indicated in the IFA presentation whether or not this heating effect occurred during ascent or descent of the RH SRB.

In contrast, Area B was ~2.5 inches in diameter x 0.5 inches in depth. Area B was located at 150º on the circumference and saw “less heat effect than adjacent areas.” A M&P analysis of this location has concluded that this foam loss occurred during SRB descent and was thus not a safety of flight issue.

The next squawk noted was a missing cotter pin on the RH Forward Skirt Deck Fitting.

As such, this was not a flight performance issue.

The eighth noted squawk for the SRBs related to foreign material, which was discovered during igniter Safe & Arm disconnects inspection, on the RH SRB IEA Code Plug coupling nuts.

A similar occurrence was seen on the STS-119 and STS-128 SRBs in March and August 2009, respectively.

A M&P analysis is ongoing; however, this foreign material did not affect the hardware’s performance.

Next, was a removal of a PC retainer for a NASA Standard Initiator (NSI). The removal of this component usually requires a wrench “due to adhesive buildup in threads.” However, the PC retainer was removed completely by hand during post-flight inspections.

Similar occurrences have been seen on STS-127 and STS-128 (July and August 2009, respectively). Currently, the SRB post-flight manual is being updated to include the ability to remove the retainer by had as an “acceptable” condition. 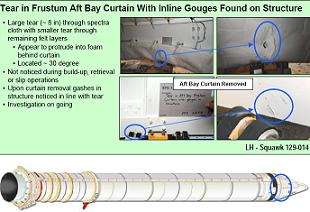 Furthermore, a tear in the Frustum Aft Bay Curtain was noted in the IFA report.

The tear, located at 30 degrees on the circumference of the SRB, apparently projects into the foam behind the curtain and was not discovered during “build-up, retrieval, and slip operations.”

Upon further investigation, “gashes in the structure were noticed in line with tear.” And investigation is ongoing to determine the cause of this tear.

The eleventh noted squawk pertained to the intrusion of grease into the Range Safety System (RSS) Linear Shaped Charge (LSC) on the LH SRB.

The grease is used during the installation process of the LSC but should not transfer on the nickel end-seal. The SRB manual will be updated as a result of this intrusion – which likely occurred during the time of assembly.

Next on the IFA list was corrosion on the Aft Tunnel Cable coupling nut on the RH SRB.

Having previously occurred on STS-128, the corrosion was “noted on outside surface of coupling nut for P2 connector” with “no corrosion on interior of connector.” 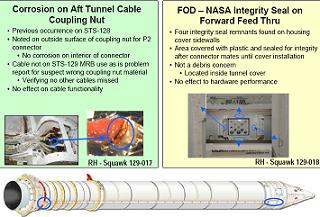 The cable was not listed on the “STS-129 Materials Review Board ‘use as is’ problem report for suspect wrong coupling nut material.”

Technicians are currently checking to ensure that no other cables were missed in the documentation process. The corrosion had no affect on the functionality of the cable.

The second-to-last listed squawk was a piece of FOD (Foreign Object Debris) in the form of NASA Integrity Seals.

In all, four integrity seal remnants were discovered during post-flight operations on the housing cover sidewalls of the Forward Feed Thru. This was not a debris concern as the seals were located inside the tunnel cover.

This is similar to previous O-ring damage. The investigation is ongoing as is the evaluation of the heat effects to the O-rings.

During STS-129, the Atlantis’ three Space Shuttle Main Engines performed exceptionally well. In all, no IFAs were declared for the SSMEs and “all SSME observations are encompassed by previous flight and/or test experience and identified as no impact,” notes the SSME IFA report, available for download on L2. 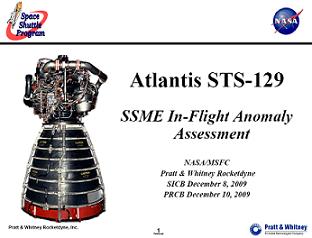 Furthermore, initial indications for the performance of Main Engine #1 (ME-1) and ME-2 indicate nominal leaks from the engine nozzles.

Additionally, the redesign of the Joint F5 Liquid Air Insulation Boot on one of Atlantis’ SSMEs appears to have worked as designed.

“Pressure & temperature measurements showed no indication of cryopumping.” The standard post-flight inspection of the boot will take place following SSME removal from Atlantis – which occurred on December 10 and 11.

Finally, the relocation of an accelerometer from “G6 to Gimbal Bearing” did not affect the performance of the accelerometer.