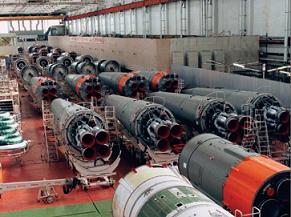 Oleg Kotov (Russia), Timothy Creamer (NASA) and Soichi Noguchi (Japan) have launched on board the Russian Soyuz TMA-17 on Sunday, taking aim on the International Space Station (ISS) where they will join NASA’s Jeff Williams, commander of the Expedition 22 crew. The crew launched at 4:51pm Eastern from the Baikonur Cosmodrome in Kazakhstan.

The launch vehicle lofting the Soyuz TMA-17 into orbit is the Soyuz-FG. The vehicle was introduced in 1966, deriving from the Vostok launcher, which in turn was based on the 8K74 or R-7a intercontinental ballistic missile. It has become the world’s most used space launcher, flying over 850 times.

The four boosters on the first stage are arranged around the central core and are tapered cylinders with the oxidizer tank in the tapered portion and the kerosene tank in the cylindrical portion. As in the entire Soyuz lower composite, the RD-107A engines of the boosters are powered by nontoxic liquid oxygen – kerosene propellants.

After a two-day trip, the Soyuz will dock to the space station at 4:58 p.m. on Tuesday, Dec. 22, beginning the crew members’ six-month stay. Kotov, Creamer and Noguchi will join Williams and Russian Flight Engineer Maxim Suraev, who have been on the complex since October.

This will be the 104th flight of the Soyuz since 1967, and will be the only crewed vehicle for the ISS for several years – if current plans to retire the shuttle over the next 12 months or so remain unchanged.