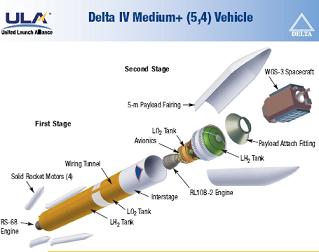 A new configuration of the Delta IV rocket has launched on its maiden flight. The new Medium+ (5,4) variant was used to orbit the Wideband Global SATCOM 3 (WGS-3) satellite for the US Air Force. Weather and a technical issue with the Ground Launch Control system put pay to the opening attempt two days ago – as the United Launch Alliance (ULA) finally launched the vehicle at the end of the window at 01:47 GMT.

WGS-3 is the third satellite in the Wideband Global SATCOM system, which will augment and eventually replace the older Defense Satellite Communications System, or DSCS. A single WGS satellite can provide around ten times the capacity of the whole DSCS system. Current plans call for six WGS satellites to be launched, the last of which will be funded by the Australian Defence Force, in exchange for participation in the programme.

WGS-3 is a 5,990 kilogram (13,200 pound) satellite, which is capable of providing communications at a rate of up to 3.6 gigabits per second, on frequencies of 500 megahertz and 1 gigahertz. It can provide nineteen coverage areas simultaneously. The satellite’s propulsion system consists of an R-4D apogee motor, and four XIPS-25 ion engines for station-keeping. It was built by Boeing, and is based on the BSS-702 satellite bus.

WGS-1, or USA-195, was launched in October 2007, and was followed by WGS-2, or USA-204, in April this year. Both of these launches used Atlas V 421 rockets; WGS-3 will be the first Wideband Global SATCOM to launch on a Delta IV. It is the last Block I WGS satellite; subsequent satellites will use the Block II configuration, which will have new features to better provide data relay for unmanned aerial vehicles.

The Delta IV, which is numbered Delta 346, will fly in the new Medium+(5,4) configuration, which features four GEM-60 solid rocket motors augmenting the first stage, and an upper stage with a diameter of five metres. The first stage is known as the Common Booster Core, or CBC, and the second stage is designated the Delta Cryogenic Second Stage, or DCSS.

Two of the solid rocket motors have fixed nozzles, whilst the other two can be gimballed to provide thrust vectoring. A 1575-5 Payload Attach Fitting will be used to connect the satellite to the upper stage.

Under the old designation system, Delta 346 would have been described as a Delta 9450. It is the first Delta IV to fly with four solid rocket motors, and the first Medium configuration to use the five-metre upper stage, which has previously been flown on the three Delta IV Heavy launches.

The Delta IV is one of the two Evolved Expendable Launch Vehicles (EELVs) which were designed to launch satellites for the US government. It first flew in 2002, with the Eutelsat W5 satellite. Today’s launch will be the eleventh flight of the Delta IV, and so far all flights have been successful except the maiden flight of the Heavy configuration, which reached a lower than expected orbit.

The launch will be conducted by United Launch Alliance, an organisation which was formed in 2006 to supply EELV and Delta II launches to the US government. It will be the thirty sixth launch to be conducted by ULA in just over three years of operations.

Around five and a half seconds before launch, the first stage RS-68 main engine will ignite, followed by the solid rocket motors, which will light one fiftieth of a second before liftoff. Following liftoff, Delta 346 will fly downrange along an azimuth of 101 degrees. It will cross the sound barrier around thirty five seconds after launch, before passing through the area of maximum dynamic pressure, Max-Q, around fifty seconds into the flight.

At 93.7 seconds into the flight, the two fixed-nozzle solid rocket motors will burn out, followed 0.4 seconds later by the other two. The motors will be jettisoned in pairs as well, with the fixed-nozzle motors separating one hundred seconds after launch, and the others following 2.4 seconds later. Separation of the payload fairing, which encapsulates the payload to protect it during ascent through the atmosphere, will occur 206.5 seconds into the flight.

The first stage will begin throttling down to maintain constant acceleration at 239.3 seconds after liftoff. Seven seconds later, the first stage will cut off. Delta 346 will then coast for six seconds before the first and second stages separate. Thirteen seconds later, the second stage’s RL10B-2 engine will ignite to begin its first burn, which will last for nearly fifteen minutes and forty-seven seconds. At the end of the burn, the engine will shut down, an event known as SECO-1, and the rocket will enter a coast phase. 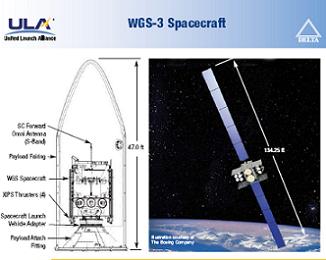 The coast will last for around eight minutes and six seconds, before the RL10B-2 will restart for its second burn. This burn will last just over three minutes and four seconds, and will be followed by another coast, this time lasting nine minutes and ten seconds. After this coast phase, Delta 346 will release the WGS-3 spacecraft into its transfer orbit.

Around three minutes after the spacecraft separates, the second stage will perform a collision avoidance manoeuvre, and around thirty five minutes later a blowdown of its propellant tanks will be conducted to reduce the chances of it exploding and creating debris.

Delta 346 will launch from Space Launch Complex 37B (SLC-37B) at the Cape Canaveral Air Force Station. SLC-37 was originally built for use by Saturn I rockets during the 1960s. Following the launch of Apollo 5, the first flight of the Lunar Module, it was mothballed, and in the 1970s it was demolished. Work to build a new complex on the site began in the late 1990s, and resulted in the first launch from the rebuilt complex, and the maiden flight of the Delta IV, in 2002. All East Coast Delta IV launches occur from SLC-37B.

This is the third and final Delta IV launch to be conducted in 2009 and the eighth launch of an EELV this year. The next Delta IV launch is scheduled for 25 February 2010, carrying the GOES-P weather satellite for the US National Oceanic and Atmospheric Administration. Before that, ULA is scheduled to launch a Delta II on 9 December, with the Wide-field Infrared Survey Explorer, or WISE, satellite for NASA.