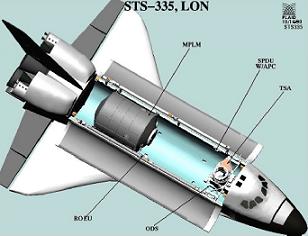 NASA managers at the Kennedy Space Center (KSC) and Johnson Space Center (JSC) have confirmed they are working on the addition of STS-135, to fly at end of the shuttle manifest in late 2010, early 2011. Although the mission has some way to go before it is baselined, Atlantis would gain the honor of flying the logistics mission to the International Space Station (ISS).

At present, the shuttle’s flying days would end with STS-133 – which is manifested as the final shuttle mission on the current schedule. This mission will be carrying ELC 4 (EXPRESS Logistics Carrier), along with the Permanent Logistics Module (PLM) that will remain on the International Space Station (ISS).

With a launch date of September 16, 2010, Discovery’s 39th flight of her career will utilize External Tank ET-138 for a 10+1 day mission that will include one EVA, later refined to 8+1 days with no EVAs. A crew of six – led by Astronaut Chief Steven Lindsey – have already been selected for this mission.

STS-335 was recently included as the LON (Launch On Need) flight in support of STS-133, which would – in the event of a contingency being called – launch with a MPLM (Multi-Purpose Logistics Module) for the purpose of replenishing the ISS’ consumables for hosting the STS-133 ahead of rescue.

In order to be in a good posture for LON, Atlantis would processed almost as per normal, following her return from STS-132 – up to the point of being near-ready to rollover to the Vehicle Assembly Building (VAB) for mating with the External Tank and twin Solid Rocket Boosters (SRBs).

Under the STS-335 requirements, it is unlikely she would leave her Orbiter Processing Facility (OPF) unless STS-133 was declared a contingency, which is in itself highly unlikely based on the shuttle’s record since Return To Flight (RTF).

However, information became available to L2 late last week that NASA and United Space Alliance (USA) managers at KSC have been requested by the Space Shuttle Program (SSP) to evaluate Atlantis’ post STS-132 flow past the point of being readied for just LON requirements. Further investigation confirmed the evaluations are based around a full-up STS-135 mission.

JSC sources also confirmed the information, noting they too were looking at the potential for baselining Atlantis under a STS-135 mission, regardless of the outcome on the upcoming decision from the White House on whether or not to extend the shuttle program as far as 2015.

While the Michoud Assembly Facility (MAF) has at least two part built tanks (ET-139 and ET-140) on standby for such an extension, the current information points to no LON being utilized for STS-135. Instead, evaluations are taking place with the Russians, in order to work out a Soyuz rescue plan in the event the STS-133 crew are unable to return home on a damaged Discovery.

Such a rescue scenario would be aided by a small STS-135 crew, with the potential of a four person crew (the minimum crew size for a Shuttle/ISS mission), utilizing a Flight Day 4 Rendezvous scenario with the ISS due to increased work loads on each astronaut ahead of docking.

A bonus factor of such a small crew allows for a large increase in upmass Atlantis could carry. Each removed crewmember also reduces their consumables, seat mass and equipment that they would have previously been required to carry onboard the orbiter. 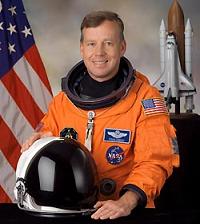 Incidentally, it was also mentioned in the information that Colonel Lindsey has been pencilled in to command the STS-135 mission, should it become baselined, possibly with some of his STS-133 crewmembers.

Such a move – if confirmed – would open up crew slots on STS-133, which in turn may dictate the timeline STS-135 has to become baselined, in order to allow new crewmembers to be “loaded” (trained) for the mission.

As far as hardware assets are concerned, NASA have already ordered the two SRBs that will fly with Atlantis under the STS-335 LON requirement. The External Tank – ET-122 – was also added to the flight several months ago, with repair work proceeding well at MAF, following its turnaround from Hurricane Katrina-related damage.

Although another completed tank is located at the New Orleans facility, ET-122 is the only available Super Light Weight Tank (SLWT), which is a difference of several thousand pounds of added upmass ability at launch when compared to the older test article tank.

Most of the foam TPS (Thermal Protection System) repairs have been completed on ET-122, and it remains on schedule to be shipped to KSC after ET-138. To ensure the schedules remain on track, MAF managers recently carried out a process of mapping several “Kaizen events” to ensure the most effective flow on the tank.

“ET-122: Another Kaizen event is taking place to be sure the work planning is going accordingly. TPS PDL (foam) repairs remain in work,” noted an update on the latest Shuttle Standup/Integration reports (L2).

“Shearography results for this tank (have been) received, and a plan has been developed to perform some on-tank verifications of this information. This plan was approved by the Chief Engineers’ Board on November 12. Engineering will perform this work.

“Finishing up with LO2 intertank flange trims. Cleaning up and getting ready to move to Cell A. Working on cable tray, gap closures, and general NCD dissection trims.”

Once NASA and contractor bodies have completed their evaluations into supporting the STS-135 mission, the process of approving it as a baseline mission into the shuttle manifest may require political support, via funding.

At present, NASA expects to receive support to fly out its manifest into early 2011, as a bufferzone for delays and technical issues that may arise during the 2010 schedule of five missions. Such support would in theory allow for the addition of STS-135, which would be encompassed by available funds to the SSP based on timescale, as opposed to the number of flights.

STS-335 is currently scheduled to be ready to launch sometime between November and December of 2010, although this is based on a current schedule that calls for five flights to be completed before the end of September. It is highly likely this flight rate will be spread out, with a more realistic schedule of early 2011 to be pencilled in for STS-335/135.

The benefit of adding STS-135 would prove to be of vital importance to the ISS – and this has been touted as the single reason for the evaluations into adding the mission. The ISS, which is likely to be extended to 2020, will have to cope without the unrivalled upmass and downmass of the shuttle once the fleet is retired.

Although it is becoming less likely as the months drag on that the shuttle manifest will be extended – a decision to add flights would automatically result in STS-135 becoming a reality.