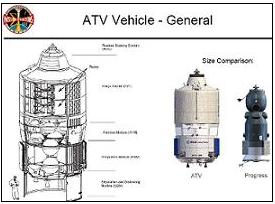 International Space Station Program (ISSP) and Space Shuttle Program (SSP) engineers have updated NASA on the safety issues pertaining to Dual-Docked Operations (DDO) between the Space Shuttle and various Russian visiting vehicles making use of the numerous Russian docking ports. Meanwhile, the three man crew of Soyuz TMA-17 have docked with the Station.

Oleg Kotov (Russia), Timothy Creamer (NASA), and Soichi Noguchi (Japan) have arrived at the ISS onboard the Russian Soyuz TMA-17, following launch from the Baikonur Cosmodrome in Kazakhstan on Sunday. The vehicle docked with the orbital outpost at 22:48 GMT.

The TMA-17 crew join NASA’s Jeff Williams and Russian Flight Engineer Maxim Suraev, who have been on the complex since October.

This type of constraint was most recently seen during the March 2009 flight of Space Shuttle Discovery on STS-119. For this mission, two flight days and one EVA (Spacewalk) were eliminated from the flight in order to launch STS-119 before the Soyuz Expedition 18/19 handover later that month.

While this deletion of mission specific content was acceptable for STS-119 due to the deferrable nature of the work, it nonetheless highlighted the complex and stringent nature of the current flight rules when dealing with multiple vehicle dockings/undockings at the ISS in a short period.

In response to the desire to have the best and most up-to-date information on this topic, the SSP and ISSP undertook an investigation into the possibility of eliminating the DDO constraint for Space Shuttle missions starting with last month’s STS-129 flight of Atlantis.

In effect, this analysis was undertaken to provide “schedule flexibility to both the SSP and ISSP.” In particular, this study is extremely important to the continued smooth operation of the construction, outfitting, and maintenance of the ISS given a nominal six-person crew size.

In all, with a standard crew of six people, the ISS will receive at least six Progress resupply vehicles, four Soyuz vehicles, one Automated Transfer Vehicle from the European Space Agency, one HTV resupply craft from Japan, and one Commercial Resupply Services (CRS) vehicle per year.

This creates an increased likelihood of traffic conflicts at the ISS – something that could be alleviated with more flexibility from the ISSP and SSP in terms of the docked requirements of the Space Shuttle.

Since 2006, several mission specific studies have been conducted in regard to this topic, but no overall analysis was convened until recently.

As a result of this work, a set of Ground Rules and Operational Constraints for DDO have been identified – as have the specific responsibilities of the SSP, FO&I, and ISSP.

To accomplish DDO, it has been agreed that “Space Shuttle FO&I is responsible for the integration and management of DDO across the Space Shuttle Program and the interface with the ISS,” notes the presentation.

For the Orbiter Project Office, their primary responsibility will be to certify the Orbiter and Orbiter Government Flown Equipment for the new environments associated with DDO.

Likewise, SSP Safety and Mission Assurance (SMA) division will be tasked with reviewing, assessing, and coordinating all SMA documentation with the ISSP SMA and Safety Review Panel.

Finally, the ISSP will be responsible for providing the SSP with all necessary documentation and information on the “Russian vehicle environments and supporting data/analyses for use in Shuttle analyses.”

Moreover, the DDO status presentation notes that DDO will only be allowed at certain ISS docking ports. 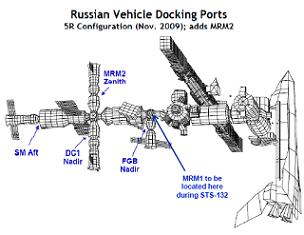 Moreover, for the FGB, only MRM-2 was included in the analysis. MRM-1 – scheduled to launch aboard Shuttle Atlantis on STS-132 – will be factored into the analysis after STS-132 is complete.

Further Ground Rules include the prohibition of docking/undocking events while cargo elements are attached to the Shuttle Remote Manipulator System (SRMS), during EVA activities, and during Shuttle dock/undocking days.

In addition, the ISS will be under Russian segment control during all Soyuz/Progress DDO dockings while the shuttle Orbiter’s systems remain in a passive condition.

For Soyuz/Progress DDO undockings, one of two options will be exercised.

Under option #1, the Soyuz or Progress would undock while the ISS/Shuttle stack is under Russian segment control.

Option #2 would see Soyuz or Progress undocking while the ISS/Shuttle stack is under the control of the Orbiter’s Vernier Reaction Control System jets. Further, “there shall be no analysis or consideration for looking at Vernier jet fail case that leads to Alt- PRCS (Primary Reaction Control System) jet control for this case.”

Also, there will be no consideration to a joint Orbiter/Russian segment control scenario due to the complex nature of ISS solar array positioning for thruster jet plume clearances from both the Orbiter and the Russian segment.

Furthermore, DDO will only occur for Soyuz crew rotations during what is referred to as indirect Soyuz crew handovers.

“For Soyuz dockings, DDO shall only occur during indirect Soyuz crew rotations with no more than 13 crew.”

Indirect Soyuz crew rotations – for a nominal ISS crew of six – occur in the December and May time frames and involve a three person subset of the ISS crew disembarking the Station via a Soyuz spacecraft. After ~1 to 2 weeks, another Soyuz vehicle is launched by the Russian Space Agency with three new crewmembers for the ISS.

During the time between the undocking and launch and docking of the Soyuz spacecrafts, the ISS crew consists of only two or three crewmembers.

Direct Soyuz crew handovers on the other hand involve the launch of a new three person crew subset while the ISS crew still numbers five or six. This new crew subset then docks with the ISS – bringing the Station’s crew size to eight or nine.

After a week of joint operations, a three person subset of the ISS crew (who have been on the ISS for six months) then depart the ISS, thus reducing the ISS crew size to five or six again.

In essence, the ISS crew size (counting the crew of a Shuttle) cannot exceed 13 people for environmental and safety considerations.

Finally, all Russian vehicle dockings/undockings have to occur over Russian Ground track only and can only occur during ISS/Shuttle crew wake times. Further, Soyuz and Progress craft relocation endeavors on ISS will not be considered viable for DDO.

Kick starting the most recent round of mission-specific DDO assessments was the STS-129 mission of Atlantis last month.

Originally planned to occur close to or during the Soyuz 19S undocking, SSP and ISSP engineers began looking at the possibility of conducting the STS-129 mission in conjunction with the 19S undocking.

However, the 19S undocking was moved from November 23 to December 1 – thereby placing it in the middle of a Solar Beta Angle Cutout: a period of time in which Shuttle docked operations with the ISS is precluded do to thermal constraints. As such, mission specific DDO analyses were discontinued.

However, the teams continued their analyses in terms of generic assessments of DDO opportunities/possibilities.

“Teams are no longer performing Flight Specific Analysis for a 19 Soyuz (19S) undocking during the STS-129/ULF3 mated mission,” notes the DDO status presentation. “SSP and ISS Teams have continued to focus on generic assessments including those specifically required to clear a Soyuz/Progress undocking from the FGB-Nadir port.” 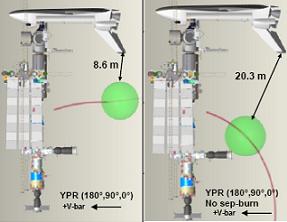 For these generic assessments, the FGB-Nadir docking port was classified as the “worst case” in terms of clearance issues with a docked Orbiter and environment concerns in the Orbiter’s Payload Bay.

These generic assessments of DDO could greatly benefit all remaining Shuttle missions. In fact, factoring in a two month slip to each mission, the DDO status presentation reveals that all five remaining Shuttle flights hold the potential for overlapping with currently plan Soyuz/Progress dockings/undockings.

To this end, as of the late-October date on the DDO presentation, the Mission Operations Directorate (MOD) and the ISSP were “continuing to perform trajectory clearance analysis for each ISS docking port.”

As part of the initial analysis for STS-129, the DDO analysis team was able to clear Soyuz/Progress dockings to Docking Compartment 1 (DC-1) Nadir as well as the Service Module (SM) aft.

“No concern to an Orbiter docked to Pressurized Mating Adapter 2 (PMA-2) on Node-2 forward port from an approach trajectory/corridor perspective” for DC-1 and SM aft approach and docking, noted the DDO status presentation.

However a Soyuz/Progress docking to the FGB-Nadir port has been ruled out due to the approaching Soyuz’s/Progress’ proximity to a docked Orbiter. 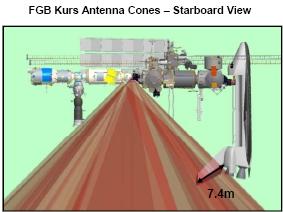 “Soyuz/Progress docking to Functional Cargo Block (FGB)-Nadir ruled out due to close proximity to Orbiter for approaching Soyuz/Progress and Kurs Antenna Cone impingement.”

The presentation did not specifically indicate whether this clearance is acceptable or not, though the presentation does state that analyses in regard to a Soyuz/Progress undocking from FGB-Nadir are ongoing as of October.

Additionally, Soyuz/Progress undockings from SM-zenith (MRM-2) and SM-aft are still under evaluation, with SM-zenith undocking analyses taking priority due to the potential DDO from this docking port with STS-130.

Final analyses were expected to be completed for most of the docking ports under consideration following a Technical Interchange Meeting with Russian specialists at the end of October.

In addition to the standard approach and departure trajectories, the DDO analysis team also examined the various abort trajectories for approaching Soyuz/Progress vehicles.

In all, Soyuz/Progress rendezvous aborts from the DC-1, SM-aft, and SM-zenith ports all have positive clearance margins to an Orbiter docked to Node-2’s PMA-2.

Furthermore, all “automated aborts within 200 meters are ‘corridor back-outs’ covered by existing clearance with the corridors in the ISS Russian Segment Specification,” notes the DDO status presentation.

Once again, FGB-nadir has been ruled out as a potential DDO docking location due to rendezvous clearance issues. In fact, even after MRM-1 is attached to FGB-nadir during STS-132 in May 2010, clearance of Soyuz/Progress abort trajectories in relation to a docked Orbiter are “dependant upon nominal approach clearance analysis.”

A formal review of all Soyuz/Progress rendezvous abort trajectories was scheduled for November 27.

In addition to the physical paths the Soyuz and Progress vehicles will take during their respective approaches and departures from the ISS, an analysis of the environmental conditions an arriving/departing Soyuz/Progress vehicle will impart on a docked shuttle Orbiter was also conducted.

Further, the “particle fluence” environments of docking and undocking Russian vehicles from all ISS Russian segment ports as well as plume model analyses were examined.

For this part of the analysis, a complete list of the Orbiter’s critical optical and sensor locations as well as the final Orbiter high resolution model were submitted to ISS environments for final assessments on September 18 and October 20, respectively.

In this manner, the Orbiter Project Office has already completed assessment of the Orbiter’s Thermal Protection System, Reinforced Carbon-Carbon panels, and Payload Bay radiators. No further analysis is required on these areas of the vehicle.

Furthermore, during DDO the Orbiter’s star tracker door will be closed and the Trajectory Control Sensor will be protected by closing the shutter door.

For the Orbiter trajectory control sensor (TCS) “internal mechanisms are protected by a shutter that would be closed during dual docked operations,” notes the presentation. “Outer surfaces (shutter and thermal blanket) could be degraded/damaged (blanket degradation could impact TCS operating temperature but little impact would be noted during undocking).”

In all, the generic analyses for DDO are promising and – pending mission specific DDO examinations – the five remaining Shuttle missions could be allowed to fly during Soyuz/Progress dockings/undockings as long as all parties (SSP, ISSP, and the Russian Space Agency) are comfortable with the results of the various analyses and adequate timelines for all operations can be created.

STS-130: Endeavour ready for rollout after late repairs on ET-134