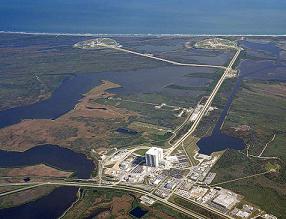 Mating operations have been completed in the Vehicle Assembly Building (VAB) ahead of an extended stay for Endeavour as the STS-130 stack, with the orbiter now powered down for the Christmas holidays. Meanwhile, the Program Requirements Control Board (PRCB) approved a Change Request (CR) to officially target STS-130 on a February 7 launch date, whilst adding an extra docked day to the mission.

Following the completion of mating tasks between Endeavour and the External Tank (ET-134), several tests were carried out on the stack, known as the Shuttle Interface Test (S0008).

Only two Interim Problem Reports (IPRs) were listed during the recent flow, both minor – although one caused the master alarm to sound on Endeavour.

“Power supply dropped off line causing the cabin fan to stop, resulting in a master alarm,” added the NTD report. “Cooling was re-established. In addition, power supply also dropped off line. Power supplies were brought back on line and vehicle cooling was balanced. There were no power transients reported. Test project engineering is investigating further into potential causes.”

With the completion of S0008 operations, Endeavour has been powered down for an extended stay in the VAB, ahead of a planned rollout to Pad 39A on January 6.

“Orbiter/SRB final VAB power down. The stack is configured for rollout and the holiday break,” added the processing information. “Heaters will be configured and the hatch will be left open.”

While the decision to leave the STS-130 housed in the VAB over the holidays benefits the workforce’s schedule over Christmas, Mission Management Team (MMT) chair Mike Moses explained the extended VAB stay mainly related to the scheduled maintenance at the launch pad, which involve a period of power outage.

“The decision to leave Endeavour in the VAB was much simpler than just the workforce holiday debate. While we don’t have the all the purge and environmental conditioning equipment in the VAB as we do at the pad, we conduct periodic maintenance on the major working areas out here,” said Mr Moses in an interview with NASASpaceflight.com’s Chris Gebhardt.

“Each year, during the Christmas/New Years holiday we shut down power to one of three areas – like the industrial area, complex 39, and the management district. We rotate through these areas each year. This year, we’re conducting that maintenance on the Complex 39 area. So, instead of hauling electrical generators and various other equipment out to the pad to compensate for the power outage, it was simpler to just leave Endeavour in the VAB until after the holiday season.”

“In terms of the negative effects of humidity on the payload bay doors, that is a concern. But since December is such a low humidity month, our projections are that the amount of moisture the payload bay doors will absorb during Endeavour’s stay in the VAB won’t drive a longer pad flow cycle.

“In fact, there’s plenty of margin in the pad flow to accommodate the extra time – which isn’t much additional time – the environmental conditioning of the payload bay doors to remove any excess moisture will take.”

Once engineers and managers return in the New Year, STS-130 will hit several milestones from a paperwork standpoint, with the MOD 8th Floor status update this week confirming the STS-130 SSP (Space Shuttle Program) FRR (Flight Readiness Review) scheduled for January 19th and 20th with the Level 1 FRR at KSC on January 27th. 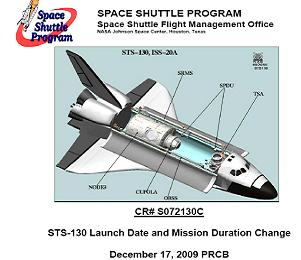 The 8th Floor also pre-empted Thursday’s PRCB review of the launch date, noting it “will be updated to February 7th at the December 17th PRCB.” That – and a change in mission duration – was confirmed via the related PRCB presentation.

“Approve CR (Change Request) to update the STS-130 Flight Definition and Requirements Document (FDRD) launch date to 02/07/10 and the mission duration to 13+1 days,” prefaced the overview presentation, available on L2.

The reason for the change of launch date related to the range availability, while the refinement of the mission duration allows for the work of relocating PMA-3 (Pressurized Mating Adaptor) to be conducted during the mission.

“Rationale of Change Request: Launch date moved 3 days to satisfy conflict with range availability. Additional docked day is required to perform PMA-3 relocation during STS-130 mission,” the presentation added. “Impacting the Feb 4 launch date is the fact that the Russian 36P docks with ISS on Feb 6 and Atlas has the range thru the Feb 4 launch date. 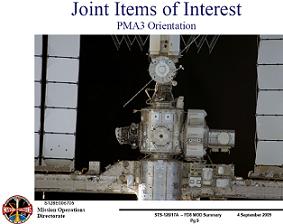 “Current products have been built for a 12+1+2 mission. The Flight Directors have directed that the timeline be developed for a 13+1+2 mission to accommodate relocation of the PMA3 and other IV tasks. If 13+1+2 (was) not approved, providing the extra docked day, current mission objectives cannot be met.”

Managers at the PRCB approved the changes, along with notes on the processing flow impacts – or “pinch points” for the downstream missions, with five flights currently packed closely together on the manifest.

“Pad A post STS-130 launch turn around is currently 12 days, this will be reduced to 9 days before SSV (Space Shuttle Vehicle) Pad Roll Out of STS-131. IFA (In Flight Anomaly) resolution becomes a factor if trouble shooting requires access to vehicle areas that are not accessible at Pad A.

STS-131: Engineers working through issue with FRCS on Discovery