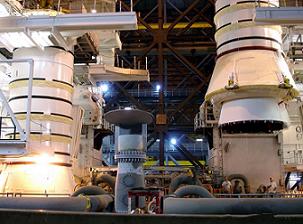 With work complete for the year on Endeavour in the Vehicle Assembly Building (VAB), her older sister is in the final stages of processing, ahead of the Christmas holidays. With the External Tank now enroute to Florida, Discovery’s Forward Reaction Control System (FRCS) has been successfully reinstalled – following a few issues during its original installation.

With no changes to the schedule of the packed shuttle manifest expected until direction is received from the White House next year, engineers are in full swing with processing on three vehicles for the opening flights of 2010.

Endeavour is now powered down for the holidays, ahead of rolling out to Pad 39A for her February 7 launch on STS-130 – a processing flow that has a reasonable amount of margin built in. While Atlantis continues to undergo post flight processing, STS-131 also remains on a good timeline – as Discovery’s engineers start to wind down processing for Christmas.

“Processing will continue at KSC at a steady clip,” noted KSC Launch Integration on the latest Shuttle Standup/Integration report (L2). “The ET Mate for STS-131/19A is scheduled for the end of January; the ET Mate Review will be held prior to this.”

Stacking of Discovery’s boosters has already begun inside High Bay 3 of the VAB, next door to the stacked – and now powered down – Endeavour/STS-130 stack. Stacking will continue throughout the opening part of this Christmas week.

A slight issue has been reported as an Interim Problem Report (IPR) during stacking, relating to an extra shim on the Hold Down Posts, which has resulted in the stack being slightly – by fractions of an inch – higher than expected.

“Suspect Condition – All eight SRB Hold Down Posts have a 0.063 Extra Shim making the stack too high. Initial indications are that the delta is within acceptable margin and that the IPR may be closed as MR (Material Review) or as an explained condition,” noted a Monday evening processing update.

Over in Discovery’s Orbiter Processing Facility (OPF-3), work has been completed on the reinstallation of her FRCS, following the decision to remove the large unit of thrusters – which sits in the nose section of the vehicle – for repairs to its bolts and seals, shortly after it was initially reinstalled after servicing work.

“In OPF Bay 3, repairs are complete on the FRCS, and reinstallation is complete. FRCS interface verification and checks is scheduled to complete on Monday. This will be followed by system testing and installation of BRI tile on the MLGD (Main Landing Gear Door),” added NTD processing, with the entire operation causing no adverse effects on the STS-130 flow – as engineers continue other processing requirements in parallel.

Further work will be carried out with ammonia servicing and waterproofing continuing through the week, along with final work to closeout the vehicle for the holidays.

“The vehicle was powered up Tuesday supporting stowage of the KU Band Antenna and Payload Bay Door closure; both were secured to support and vehicle power-down is in-work,” added Monday night processing information (L2).

“During the latching operations on the right-hand door, Motor #2 stalled before Centerline Latches 1-4 reached their limit switches. The team got real-time concurrence to cycle the latches to unlatch and try to latch again; all worked nominally using Motor #2; the UA (Unexplained Anomaly) will be updated to document the additional work.” 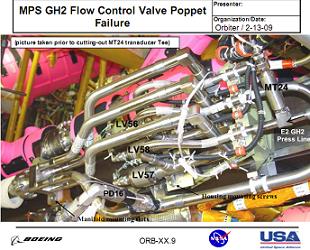 Ahead of rollover to the VAB early next year – currently targeting February 9, just two days after Endeavour launches on STS-130 – Discovery will receive her three Flow Control Valves (FCVs) from their Californian vendor “Vacco”.

“For OV-103 (Discovery), the FCVs at the vendor are in paper closure. These are expected to ship ahead of schedule and be at KSC after the beginning of January,” noted the Standup report, confirming that the current plan continues to be one of using “good” flight valves that are then sent for inspection prior to reuse.

These inspections check for signs of cracking on the poppet area of the valve, called for after one of Endeavour’s FCVs cracked and liberated a small piece during STS-126’s ascent – which in turn kicked off an impressive engineering effort to both understand the cause and protect against worst case scenarios.

External Tank (ET-135) has left the Michoud Assembly Facility (MAF) in New Orleans, enroute to the Kennedy Space Center (KSC). The latest standup noted the tank should have been ready for shipping on Sunday, giving it a chance to arrive before Christmas Day.

“The tank (was) processing nominally in Building 420. All PDL (Foam) pours are done, except for the double IFRs (Ice Frost Ramps),” noted Lockheed Martin on the Standup report. “Roughly half a day of production was lost due to the heavy rains the area has been receiving. Work should be completed by December 19, and the tank will be ready to roll December 20.”

However, a slight delay saw the tank eventually leave on Monday – with an update on its expected arrival time due on Wednesday.

“ET-135, aboard Pegasus/Freedom Star, departed Gulfport this morning and are heading for Port Canaveral,” noted a Monday update. “As of now, their exact ETA is TBD – we will likely know a fairly accurate schedule by Wednesday.”