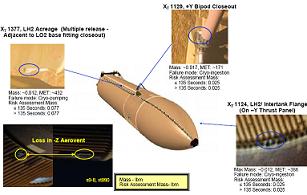 External Tank ET-135 has arrived at the Kennedy Space Center (KSC), following its journey from New Orleans in the Pegasus Barge. The tank will remain inside the barge until the new year, ahead of being towed into the Vehicle Assembly Building (VAB) for processing. Meanwhile, engineers are continuing to evaluate the foam loss observed from STS-129’s ET-133 intertank during flight.

She was powered down for the Christmas holidays during the week, following late work on checking her ET Doors and a retest of a Multiplexer Demultiplexer (MDM) – along with the installation of sensors that will gain additional data on Main Engine Ignition (MEI) Acoustic and SSME (Space Shuttle Main Engine) Ignition Overpressure (IOP) Environments.

“The side hatch was closed in support of waterproofing operations. MEI (Main Engine Ignition) work on the LPOD stinger door in work.”

Stacking of STS-131’s Solid Rocket Boosters (SRBs) will also continue when engineers arrive back after the holidays, with the left booster currently being secured on the Mobile Launch Platform (MLP) in the VAB.

“The Left Aft Booster was set down on the MLP as scheduled; work to install Hold Down Post Studs and perform tensioning continues.”

ET-135 arrived in the Turn Basin near the VAB on Christmas Day, ahead of being towed into dock. There it will remain for an extended period of time – last seen with ET-117, which spent 24 days on the barge at KSC – prior to being removed from the barge and towed into the VAB.

“ET-135, aboard Pegasus/Freedom Star, departed Gulfport Monday and are heading for Port Canaveral. Anticipated arrival at the VAB Turn Basin is 12/25,” noted mid-week information. “Offload is scheduled for 1/5/10 with the lift into the VAB Checkout Cell scheduled for 1/6/10; both support the STS-131 timeline.”

With ET-134 already stacked to the STS-130 vehicle, two tanks at KSC will benefit from the lessons learned from the previous flight to launch from the Cape – STS-129.

ET-133’s performance was reviewed at the end of mission IFA (In Flight Anomaly Review) at a mid December Program Requirements Control Board (PRCB) meeting, which found the tank’s overall performance was excellent.

“16-Nov-09, STS-129 / ET-133: Launch at 1928 GMT on 11/16/09 (1328 hrs Central time on 11/16/09): Pre-launch Performance Assessment: Electrical and Propulsion systems performed nominally. No leakage detected at the GUCP (Ground Umbilical Carrier Plate) during the transition to topping,” noted the Lockheed Martin ET-133 IFA presentation – available with the other 12 IFA presentations on L2. 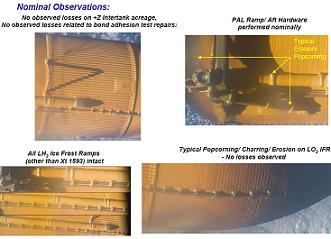 Foam liberations during early ascent are obviously the main concern for the performance of the tank from a non propulsion standpoint during launch, with the presentation showing the Michoud Assembly Facility (MAF) engineers once again handed NASA a great tank, with only minor liberations observed via an area of onboard cameras – including the debuting flight deck camera.

All of the tank’s LH2 and LO2 IFR (Ice Frost Ramps) – the latter filmed by the new flight deck camera – were shown to be in excellent condition after ET sep, after the IFRs had suffered from a few minor liberations during recent flights. 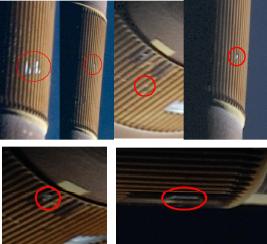 Also an item of interest, the foam losses from the intertank region – observed on ET-131’s flight with STS-127 – resulted in “pull tests” and “plug pulls” on subsequent tanks, concentrating on the top side that holds the greatest threat to the orbiter in the event of liberations.

“Losses are not to the same extent or degree, but appear to have the same failure mode. There are indications of primer in most locations, but imagery is not conclusive. Coincident with similar locations as those observed on ET-131.” 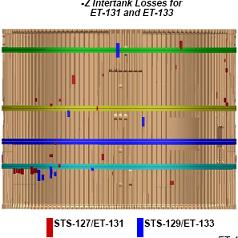 Those losses from ET-131 are understood to have been caused by a contaminant – likely to be dust – making its way on to the structure of the tank ahead of the application of the TPS foam, thus reducing the foam’s adhesiveness. Another investigation was called for ET-133’s intertank events, with the hope that processing photographs may confirm a similar situation.

Regardless, pull tests are still likely to be carried out on future tanks after they arrive at KSC, under the order of SSP (Space Shuttle Program) managers – who have changed the “risk” status accordingly.

“IFA recommended for foam loss on -Z Intertank: Hazard Reports have been modified to address increase in risk associated with this failure mode from ‘remote’ to ‘infrequent’,” added the IFA presentation. “Will add this occurrence to existing documentation regarding IFA from ET-131 Intertank foam loss to document and track accordingly.

“Failure mode is believed to be the same as observed on ET-131, but to a lesser degree. Actions have already been taken to perform additional bond adhesion tests on ET-134 and beyond in response to this occurrence.”

However, the intertank events should not detract from the excellent performance of the tank’s TPS foam, especially after all the related challenges since Return To Flight. None of the foam losses exceeded the strict safety limits, which ultimately resulted in the extremely clean heat shield on Atlantis after she made it into orbit.

STS-130: Endeavour ready for rollout after late repairs on ET-134