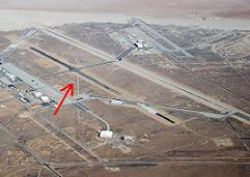 As NASA managers prepare to meet on Wednesday for the final Flight Readiness Review (FRR) ahead of Endeavour’s penultimate mission, workers throughout the agency are hard at work performing final preparations for the youngest orbiter’s scheduled February 7 launch to the International Space Station (ISS).

Last week, representatives throughout the Space Shuttle Program (SSP) met for the standard SSP FRR, resulting in a decision to move forward to the SOMD (Space Operations Mission Directorate) FRR with a recommendation to launch as scheduled on February 7.

Among the various items discussed during the one day SSP FRR were new weather data restrictions at the White Sands Space Harbor, the temporary runway at Edwards Air Force Base, Ascent Performance margins for Endeavour, Space Life Sciences Directorate readiness, and the LON/CSCS (Launch On Need/Contingency Shuttle Crew Support) timelines.

One of the more interesting items during the SSP FRR pertained to data restrictions imposed by a new United States Air Force Information Assurance policy.

Under this new policy, weather data from White Sands is now considered classified.

The Network Director was informed of the issue and needs for real-time weather data from White Sands during Shuttle launch and landing operations.

During the SSP FRR, it was revealed that the radar issue had been resolved and that all parties were waiting on “official paperwork” to formally clear the weather radar restrictions for NASA.

Under the new policy, NASA lost the ability to see the real-time information from their towers and surface observation stations along the runway at White Sands.

“Weather data impacts include NASA wind towers and surface observation stations on the runway complex,” notes the MOD presentation. “Alternate data path via RF has been established to the WSSH operations but still working on the path to JSC.”

If the feed to JSC cannot be established than the data will need to be obtained manually. Weather balloon data was not affected by the new Air Force policy.

A complete test of the weather assets at White Sands was conducted during the Terminal Countdown Demonstration Test on January 21 – the results of which will be discussed at Wednesday’s SOMD FRR at the Kennedy Space Center.

Also discussed in terms of backup landing sites, was the runway situation at Edwards Air Force Base in California.

STS-124 landing back at the Kennedy Space Center, negating the use of the temporary runway for that mission. However, STS-126 was diverted to California after bad weather in Florida forced flight controllers to scrub both landing opportunity at Kennedy.

As such, STS-126 became the first and – what was thought to be – the last Space Shuttle mission to land on the temporary runway at Edwards.

The primary runway was returned to active service prior to STS-119 in March 2009.

However, due to the need to perform additional work on the concrete surface of the primary runway at Edwards, the temporary runway will once again be used for STS-130 and STS-131 should either mission have to divert to California for a landing.

“Permanent runway concrete work to begin in mid January which will drive the need for the Temporary Runway for an EDW landing if required,” notes the MOD presentation to the SSP FRR.

All necessary crew training and familiarization with the temporary runway has been completed to date. Navigational aids are in place and have been certified for use. 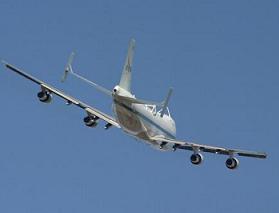 Should Endeavour land in California, the SSP FRR documents indicate that Shuttle Carrier Aircraft (SCA) 911 would be the primary SCA of choice for ferrying Endeavour back to the Kennedy Space Center.

SCA 905 would be available as a back-up.

One of these threats pertains to the SRB propellant temperature – which would affect the amount of thrust produced by each SRB.

“SRB propellant temperature predictions may trend lower than the 61 deg F that was provided with the L-30 day delivery,” notes the presentation.

Each degree below the 61 deg F prediction is equal 110 lbs of APM impact. Current long-range predictions have the temperature between 55 – 57 deg F for February 7 – which could translate into 400 lbs of AMP impacts.

To this end, the SSP FRR noted that all parties should be aware that the launch day window for Endeavour could be fewer than 5-minutes in duration.

A vital part of all space operations, the Space Life Science Directorate (SLSD) will fly three experiments on Endeavour and conduct two experiments during post-landing activities.

The experiment will involve measurements taken pre-flight, in-flight, and post-flight. 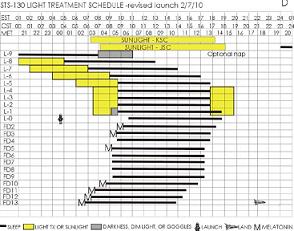 The second payload is the SDBI 1634 (Biomedical SDBI) experiment. This experiment will chart Sleep-Wake Actigraphy (the measurement of human rest/activity cycles) and light exposure during space flight.

The third in-flight experiment on STS-130 is NASA’s Spinal Elongation test. This experiment is designed to test the effects of spinal elongation on “seated height in a microgravity environment.”

The final two experiments, ZAG and OTOLITH will be performed during post-flight operations.

Post-flight activities for the SLSD will include any medical requirements of the crew and “integrated R+0 medical and research testing for KSC and DFRC (Dryden Flight Research Center).”

Should Endeavour land at White Sands, only the crew’s post-flight physicals and clinical laboratory assessments would be performed.

In all, Endeavour’s launch window for STS-130 opens on February 7 and runs through April 15 – a 68-day window constrained by a Solar Beta Angle Cutout which begins on April 15. 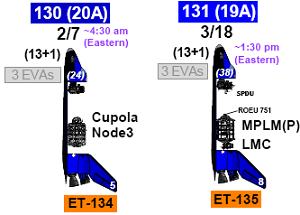 Nonetheless, NASA is planning to launch two Shuttle missions in that time period – with about a month to spare at the end of the window. Currently, Discovery and STS-131 are scheduled to launch just 39-days after Endeavour and STS-130.

This is extremely good news from the STS-130 CSCS (Contingency Shuttle Crew Support) and LON (Launch On Need) perspective as it puts Discovery’s launch well within the timeframe that ISS consumables can support both the ISS crew and Endeavour’s crew in the event that Endeavour is damaged and her crew has to take shelter on the ISS.

In terms of LON, NASA would follow its now standard procedure of “flying the next flight” in the unlikely event that a rescue mission is needed.

For LON, Discovery would use ET-135 and RSRM (Reusable Solid Rocket Motor) set 110 and fly with the 19A payload installed (the MPLM Leonardo and a LMC) in her cargo bay.

The rescue mission would launch on the already-planned STS-131 launch date: March 18 at approximately 13:38 EDT.

“With standard assumptions, duration for all consumables is greater than Shuttle LON capability of 39 days,” notes the SSP FRR Flight Crew Operations Directorate presentation – available for download on L2.

In all, the ISS can support the STS-130 crew for 103 days based on the limiting consumable of food.

These calculations were achieved based on an assumed STS-130 launch date of February 7, a total ISS crew of 11 (6 shuttle and 5 ISS), no crew return on Soyuz, Endeavour remaining docked to ISS for 24-days, a nominal exercise pattern for all 11 crewmembers, and various other environmental considerations.