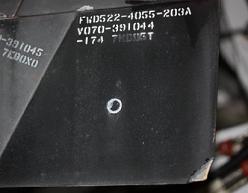 Endeavour enjoyed an extremely clean flight, following a post-landing TPS (Thermal Protection System) report, which noted only a few dings and a breached thermal barrier on her Nose Landing Gear Doors (NLGD). The protruding ceramic insert on Window 2 also remained in place, which had become the main focus of the Damage Assessment Team (DAT) evaluations during STS-130.

“Jack and level is complete. Fuel cells were powered down yesterday and the vehicle is on ground power. Controlled venting through the T-0 remains in work; fuel cell cryo tank drain should pick up shortly,” noted Tuesday processing information on L2, via the NASA Test Director (NTD).

Technically into her STS-134 flow – currently her final mission – Endeavour will be hoping to go out in style, mirroring her extremely low Interim Problem Report (IPR) count as enjoyed during STS-130’s flow. However, she has already been charged with five IPRs, all minor issues.

“New IPR-0003, a payload bay door centerline latch 13-16 limit switch is off, should be on. Engineering evaluating,” added the NTD report.

“New IPR-0004, an inadvertent switch throw on panel A1L (by an engineer). The encryption power switch was taken to the off position causing loss of encryption memory and the ability to uplink voice on Air-to-Ground 1 and 2. The switch was re-positioned and all systems are performing nominally.

As expected, Endeavour return to Earth with zero concerns relating to her TPS, thanks to the work of the DAT engineers who had evaluated ascent footage, Flight Day 2 and 3 imagery and Late Inspection data.

With only a handful of areas requiring some level of evaluation, the clearance for Endeavour’s entry was given within a short period of time at each stage of the mission (No Focused Inspection, cleared for entry peer review, Late Inspection clearance).

These results were backed up by the condition of the orbiter once on the Shuttle Landing Facility (SLF) runway, which found nothing more than “dings” – some of which can be caused by the orbiter’s rollout after the wheels hit the tarmac.

“There were 45 total damages on the lower surface, with 7 tiles damages with debris hit greater than 1 inch any dimension. There were no tiles with missing putty repairs noted. There were no protruding gap fillers noted.

The orbiter is reviewed via three main areas during the initial TPS checks, the Forward, Middle and Aft sections – with any items of interest logged into the report.

“(Forward): Chin panel -441 gap filler appeared nominal. The gap filler occupied the center of the gap, as it has for the last several flights of OV-105 (Endeavour). The gap at the time of access (22:45 EST) was approximately 0.21 inch at the center line,” added the report. 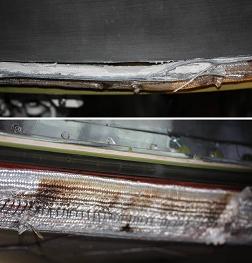 “The forward NLGD thermal barriers along the chin panel were breached and severely debonded. Minor flow paths/deposits were observed from OML to IML near the aft on the right hand side.”

“The arrowhead blanket sleeving did not have any protrusions. Fiducial marks were observed on the RCC nose cap; however, the Sharpie touchup (as mandated by V09AJ0.013) is necessary to ensure on orbit visibility next flight.”

Several references are made to the landing gear door thermal barriers, but these areas are routinely found to be in such a condition, and are only the first line of defence from the extreme temperatures of re-entry.

“The flipper door side seal [Tile number V070-198707-005] on the upper LH outboard elevon which was seen bend upward on-orbit appeared to be in the same condition upon landing.

“Engine 3 dome heat shield blanket had approximately 2 feet of frayed fabric in the upper inboard area. The typical peppering of aft base heat shield was noted. An aft tile on the LH rudder speed brake, right above the split-line thermal barrier was cracked [V070-292004-093].” 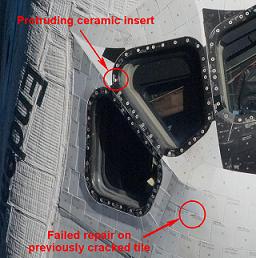 Only three areas interested the DAT engineers whilst Endeavour was on orbit. One area, a ceramic insert on the flight deck’s Window 2, was observed as protruding via Flight Day 3 RPM imagery requiring a high level of analysis.

Engineers worked on clearing this area by carrying out ground tests based around the insert liberating and striking either an OMS Pod, Endeavour’s tail, or even the window itself.

“Because of impactor geometry and density, actuator rib failure is deemed the critical location for this impact scenario. Prior mission assessments involved impactors with a larger area footprint,” noted DAT’s complex and in-depth transport data on the potential the insert could hit the Rudder Speed Brake (RSB), as seen on one of several DAT presentations for STS-130 – available on L2.

“LS-DYNA (tool) was utilized to predict impact damage onto the rudder speed brake actuator ribs by the ceramic plug and insert release during descent. Minor permanent deformation predicted for typical and worst-case DTA impact conditions, confined to local impact areas. No factors of safety are applied to the analysis. Results are considered nominal. 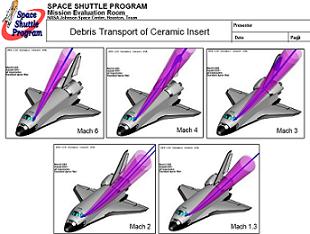 These findings earned confidence that even if the insert liberated at the worst time of the descent through the atmosphere, the insert was half the mass of that which was capable of causing some damage to the tail – even if it managed to hit the area of the RSB – only three percent of the surface area – that was close to a critical system in the tail.

“Ceramic insert impacts on RSB acreage could cause panel penetration but the damage area is expected to be relatively small because of impactor geometry and density,” the findings continued.

“Expect energy dissipation due to leading edge tiles as well as full-depth honeycomb fairing would reduce impactor velocity and is expect to cause breakup of ceramic insert.

“Forward spar would not be sensitive to damage due to fractured ceramic insert with reduced velocity.” 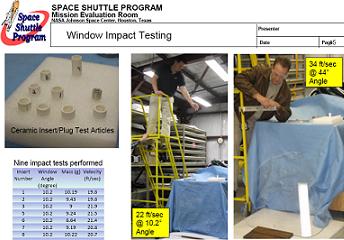 Engineers worked the data with real tests – as seen on a series of videos (L2) that showed inserts being dropped on to spare orbiter window on the ground – another area of interest had the insert liberated – which resulted in them breaking apart, despite the low velocity.

“Window (engineers) assessment based on insert liberation during entry: Thermal pane protects for descent temperatures which subside around Mach 8. Pane must remain intact (no breach) through heating phase. Impact velocities increase as Mach decreases. JSC drop test confirms no potential for thermal pane breach,” added the DAT presentation – which dedicated around 30 pages to the transport data.

“Measurable defect depths (without dispersion) do not exceed cert criteria allowable. Show potential for exceeding maximum allowable with application of dispersions. At lower Mach (<2.5), burst loads could propagate a flaw (negative margins on the pane).” 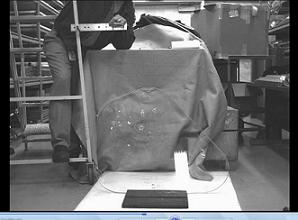 Again, as noted, no problem was found with the test results – as expected with the potential to damage a window, due to the inserts close location to the panes. However, this goes to show just how much work goes on behind the scenes during a mission, as DAT clear an orbiter for entry.

Interestingly, managers were already briefed on the slim chance the insert would liberate in the first place – and they were proven right, with post landing photography showing the insert remained in exactly the same position and level of protrusion as seen via on orbit imagery. 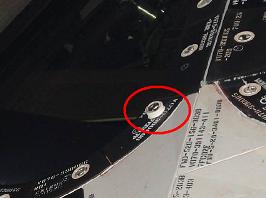 “The protruding ceramic insert on Window 2 carrier panel that was seen on-obit was still present upon landing and looked to be in the same condition,” confirmed the post-landing TPS report.

Interestingly, the presentation shows such a protrusion has been seen before, even prior to the vast improvement to on orbit imagery that allows engineers on the ground to view the health of the orbiter’s TPS. STS-102 and STS-108 are both shown as examples of previous protrusions, and on both occasions they remained in place all the way to landing.

The shuttle’s history often provides priceless flight data for the vehicles, which will be lost completely when NASA moves to a new vehicle – whatever vehicle that may be.