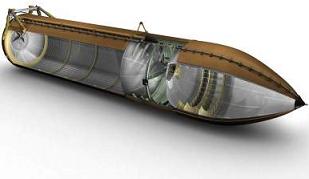 Clouds over the Kennedy Space Center (KSC) have scrubbed Endeavour’s launch by 24 hours. Earlier, tanking was delayed tanking by 30 minutes to allow engineers to clear the pad after working on a cabin pressure issue, prior to a smooth countdown. Meanwhile, External Tank (ET-134) – which will be flying with Endeavour on STS-130 – is sporting the final set of structural modifications, an effort that started with STS-123’s ET-116.

Fuel Cell Activation tasks marked the start of the final stage of S0007 Launch Countdown operations, which was completed as the constraint relating to repair efforts on leaks in the Power Reactant Storage and Distributation (PRSD) GO2 system were cleared.

The MMT met around 30 minutes prior to tanking, mainly to check all Interim Problem Reports (IPRs) and Problem Reports (PRs) that are potential constraints to taking have been cleared, along with a check on the weather conditions.

The three hour loading process hasn’t suffered from any issues since two major modifications, the first to the LH2 Feedthrough Connector – which was sending false Engine Cut Off (ECO) sensor indications during tanking, most notably on STS-122.

The other problem related to unacceptable levels of leakage from the Ground Umbilical Carrier Plate (GUCP), which was solved by a change of the flight seal design, and modifications to the alignment of the GUCP’s feet on the tank. No tanking related issues were recorded on the previous launch – STS-129.

During the latter stages of the countdown, an issue with the Cabin Pressure – which was registering a very high 125 psi reading, required engineers at the pad to check an associated regulator.

Go for tanking was given by the Mission Management Team (MMT) pending the engineers clearing the pad after working on the pressure issue – ultimately delaying tanking by around 30 minutes. The IPR on the pressure issue was resolved and closed as a constraint, as tanking proceeded to plan – with good ECO sensor SIM checks. The only other IPR (62) related to a SRB issue, which was minor and soon cleared.

Once the crew has ingressed the orbiter, weather concerns with cloud cover led to an initial decline in the probability for a constraint to launch of 40 percent, before later rising to 70 percent no go. This resulted in a scrub during the polling to come out of the T-9 minute hold.

A new article will follow later on Sunday for the second launch attempt. Refer to the live update pages for a review of the up-to-the-second updates for attempt 1.

Despite the shuttle program only having five more launches remaining, the efforts to improve the safety of the vehicle have never stopped and remains as vigorous as ever. The latest improvements can be seen via the 50+ STS-130 Flight Readiness Review (FRR) presentations acquired by L2.

One such example is the ET presentation by Lockheed Martin, which included an overview on the final stage of structural improvements that have been made to Endeavour’s tank.

Ironically, the switch to FSW production of the tanks was mainly part of the Michoud Assembly Facility (MAF) preparations for the fabrication of Ares I and Ares V stages – which are currently both cancelled via the President’s FY2011 budget proposal.

The successful use of this technology on the shuttle external tank – along with an improvement to the materials used – was also a positive for the potential to extend the shuttle program via the new tooling now in place. That too is ruled out in the budget proposal. 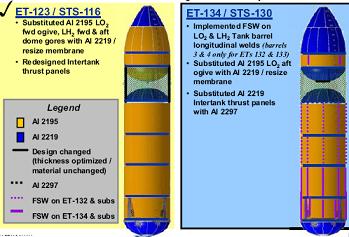 Noting the changes in greater depth, the presentation notes gives a specific overview of the thrust panel changes since STS-129’s ET-133 – which has resulted in additional mass margin on other areas of the tank. 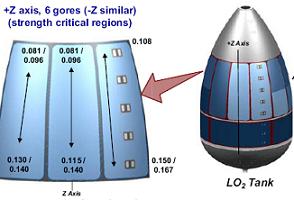 Buying the mass savings from the thrust panel changes, additional structural improvements were added to the Ogive gore panels – which marked the final improvement that will be made to the tank, pending new issues over these final five flights.

Overall, the TPS design configuration for this tank is the same as previous flight. The In Flight Anomaly Review (IFA) for STS-129/ET-133 flight performance assessment noted nominal performance observed for all TPS applications in critical debris zone.

STS-129’s tank was the first flight of the redesigned LH2 Ice Frost Ramp base closeout (return to NCFI 24-124). Only one IFA declared for the Intertank TPS losses on the Z side of the tank – which held no threat to the orbiter. These intertank acreage losses are consistent with the events noted on ET-131/STS-127.

TPS NDE (Non Destructive Evaluation) assessments on ET-134 were also noted as successfully completed, with all indications within expected performance and previous observations. All potential divot masses are predicted to be less than 0.010 lbm prior to 135 seconds into ascent, which would not cause damage to Endeavour.