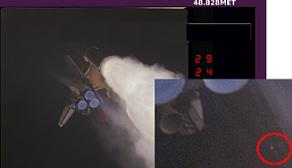 As Endeavour sails into what is expected to be her final full day on orbit, the STS-130 crew spent the day testing and reconfiguring Endeavour ahead of the mission’s opening Deorbit, Entry, and Landing attempts Sunday evening. Meanwhile, Endeavour’s TPS (Thermal Protection System) has been cleared for reentry – with only three (3) areas of TPS anomalies gaining mention in the primary TPS overview presentation.

Flight Day 14 marked the first full day in orbit since departing from the International Space Station on Friday. Classed as End Of Mission minus one day (EOM-1), the crew have proceeded through numerous checks on the orbiter, ahead of the planned landing on Sunday evening.

Broken down, the key events carried out by the crew based mainly around the Flight Control Surfaces (FCS) checkouts (C/O) – a visible event as Endeavour’s elevons were rotated to their extremes – and powered by one of the orbiter’s Auxiliary Power Units (APU-1). All of Endeavour’s Reaction Control System (RCS) jets used during the return to Earth were also pulsed once to confirm their status.

No new issues – or any issues of note – are being worked by the Mission Evaluation Room (MER), with the Fuel Cell 2 indications – noted on FD-13 – related to instrumentation.

Landing on Sunday remains at the mercy of the weather, with the two landing opportunities at the Kennedy Space Center (KSC) both threatening to be waved off due to the possibility of showers and unacceptable cloud cover.

All three sites are likely to be called up – which included Edwards Air Force Base in California and White Sands in New Mexico – on Monday (EOM+1). EOM+2 will remain reserved as the wave off day for a technical issue,

In all, Endeavour enjoyed an extremely clean ride to orbit during her February 8th night launch from the Kennedy Space Center.

In all, every area of Endeavour’s TPS was photographed/imaged during the opening three FDs of her mission. Stemming from these photos/images, there were no (0 – ZERO) identified underbelly TPS scuffs or damage zones on Endeavour. 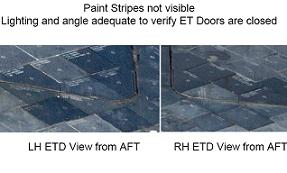 No ET door paint stripes were visible and all lighting and angles in relation to the Endeavour and ISS were acceptable for ISS photography.

In all, there were only three (3) areas of TPS concern across Endeavour’s entire TPS system – all of which are located on the upper portion of NASA’s youngest orbiter.

These three areas include a protruding ceramic insert/plug below Window #2, a cracked title “adjacent to (a) previous RTV (Room-Temperature Vulcanized) repair,” and a peeled back Inconel Seal between Flipper Doors on an elevon as evalauted by the Damage Assessment Team (DAT) – with all their STS-130 presentations available to download on L2.

In regard to the protruding ceramic insert, documentation shows that the tile – which is 0.57” thick – was installed onto Endeavour on June 11, 2006 during her last Orbiter Modification Down Period (OMDP). 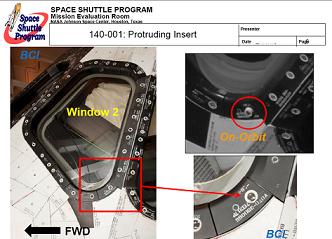 The presentation notes that impacts to the Rudder Speed Brake (RSB) are possible at higher velocities should the ceramic insert liberate during reentry.

In a worst case scenario, should the ceramic insert liberate, analyses show that no ‘detrimental’ damage would occur to the windows that would result in catastrophic failure.

“No detrimental damage that will result in catastrophic failure. Potential exists for glass fracture at low altitude.”

The worst case scenario for a RSB impact would be a damage area on the RSB of 12.5ft2 which – even at that stage – would still yield positive margins in terms of Entry GN&C (Guidance Navigation and Control) performance. These findings will be expanded on in Sunday’s article.

For the cracked TPS tile on the top of Endeavour’s Crew Cabin, documentation shows the cracked tile was repaired in 2007 using a standard RTV repair technique. 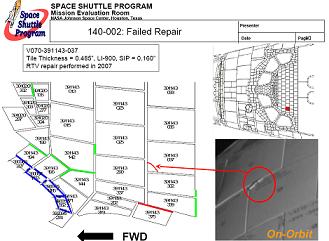 Should the cracked piece of tile liberate during reentry, a 120ft-lb normal kinetic energy impact would be required to produce significant structural to the OMS pods and RSB.

“120ft-lb is a mean value that has no uncertainties associated based on AFRSI impacts on OMS Pod structure.”

Based on the liberation properties of the cracked tile piece, the maximum predicted OMS pod kinetic impact is 72ft-lb and 30ft-lb for the RSB – well below the energy required to cause damage. 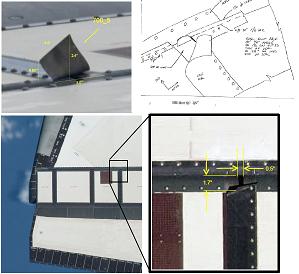 “Left hand outboard elevon flipper door sliding seal between doors #12 and #13 is deformed resulting in a 2.6” high x 3” wide protuberance and 0.5” wide by 1.7” long leak path into the elevon cove.”

The seal in question is “bent up” the full length of seal.

The presentation notes that similar conditions have been noted on previous flights of orbiter Atlantis, flights 10 and 11 specifically.

The presentation notes that multiple Problem Reports have been taken on the flipper door seals throughout the near 29-year history of the Shuttle Program.

A rework of the system was attempted but the primary concern could not be eliminated.

The cause of the flipper door damage on Endeavour has been identified as “flight damage” occurring approximately 48-seconds into Endeavour’s launch during a potential debris impact near that area of the vehicle.

In all, the elevons’ full range of motion is 21.5 degrees down and 36.5 degrees up. The elevons are positioned at “full down” during rollover ops to the VAB and are returned to the null position during mating ops to the ET.

During Endeavour’s Flight Control System checkout today, the elevons were be cycled 18 degrees down 32 degrees up.

Reentry, descent, and landing elevon predictions for Endeavour show a “7.5 degree down deflection late in the entry profile.”

There are no thermal concerns for entry from this damage site as the flipper seal experience approximately double the heating rate during ascent than descent.