STS-130: EVA-1 complete as Node-3/Tranquility is installed on Station 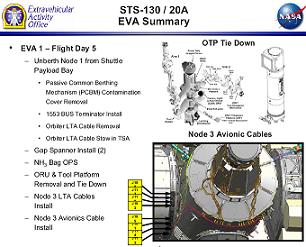 With Endeavour continuing to enjoy a smooth stay on orbit, attentions turned to first of three EVAs for the STS-130 mission. Bob Behnken and Nick Patrick (EV-1 and EV-2, respectively) completed one of the final spacewalks dedicated to the construction efforts of the ISS – with the installation of the newly mated Node 3 conducted in tandem with the productive EVA.

Overall, STS-130 continues to move down the pre-launch timeline without any major hiccups and imagery analyst have determined that no focused inspection of Endeavour will be required prior to clearing her Thermal Protection System for reentry.

Moreover, all primary Flight Day 4 (FD-4) activities were completed, including the replacement of the Distillation Assembly in the Water Recovery System by ISS crewmember Jeff Williams.

Endeavour’s numerous systems also continue to perform exceptionally well, with no new items of note from the Mission Evaluation Room (MER). Conversely, there was one new “funny,” a false ISS Caution and Warning alarm on the orbiter.

A false ISS caution and warning on the Orbiter has occurred on at least one previous flight in recent months. The false warning is not a concern for flight safety and will be investigated by the appropriate departments to determine its cause.

“During transit through the locks the left booster made contact with the fender wall during exit. Potential damage is under assessment as slip operations continue.”

At the time of the morning report, the right hand SRB had been transferred to the dolly and open assessment on both SRBs was scheduled to begin Friday morning at 7a.m. Local.

The primary task of Thursday’s spacewalk was the unberth and installation of the Node-3/Tranquility module from Endeavour to the port docking port of the Node-1/Unity module.

The EVA, which carried a planned duration of 6hrs and 30mins, saw Behnken and Patrick – with the assistance of Terry Virts and Kay Hire working the SSRMS (Space Station Remote Manipulator System) inside the ISS – unberth Node-3 from Endeavour’s payload bay.

Following unberth of Tranquillity, Behnken and Patrick removed the contamination cover from the Passive Common Berthing Mechanism on Node-3 – the berthing port where Node-3 will attach to Node-1.

The spacewalking duo also installed a BUS terminator to Node-3 and remove the Orbiter LTA cables and stowed them in the LTA cable Tool Stowage Assembly in Endeavour’s payload bay.

Behnken and Patrick then installed a gap spanning and performed a NH3 Bag OPS before removing an Orbital Replacement Unit and tying it down.

The spacewalkers then installed LTA cables onto Node-3 following its berthing to the port docking port of Unity. The final primary task of the EVA saw Behnken and Patrick install the avionics cables to Node-3. 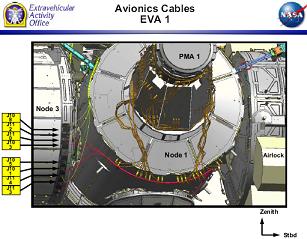 Overall, EVA-1 had numerous tasks that had to be competed in order to satisfy the critical Cat I objectives for the EVA and payload side of the STS-130 mission.

According to the EVA office presentation to the SSP FRR (Space Shuttle Program Flight Readiness Review), “EVA 1 requires full 6:30 to achieve Cat 1 objectives. EVA delays such as those caused by break in campout could drive use of (the) +1” mission day.

In the end, all primary – and a few get-ahead tasks – were completed in the 6:30 MET timeline.

Per the pre-mission planning timeline, Endeavour and the ISS carry enough consumables to support the three nominal EVAs plus one contingency EVA and two “return contingency” EVAs – in case Endeavour’s ET Umbilical Well doors had failed to close during post-launch reconfiguration (the doors closed successfully following ET separation after ascent) or in case a mechanical failure were to drive the need for a manual closing of the orbiter’s payload bay doors at the conclusion of the mission.

All three of STS-130’s planned EVAs are timelined to last 6hrs 30mins and will make use of LiOH canisters to perform the necessary carbon dioxide scrubbing of the air inside the spacewalker’s EMUs (Extra-vehicular Mobility Units).

In addition to the LiOH use, Nick Patrick will use METOX during EVA-3 to perform the necessary CO2 scrubbing of the air in his spacesuit.