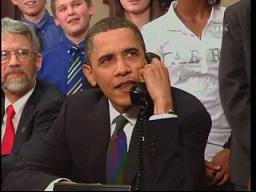 The crew of Endeavour have bid farewell to the International Space Station, following the closure of hatches between the two vehicles. No issues are being worked on the vehicle, although a late MMOD (Micro-Meteoroid Orbital Debris) impact to the crew hatch window as been evaluated and cleared for entry.

No issues are being worked by the Mission Evaluation Room (MER) as Endeavour continues to perform admirably whilst docked to the orbital outpost. She even helped the ISS yesterday evening, by gently raising the orbit of the shuttle-station stack to aid the arrival of other vehicles – including Discovery on STS-131.

“Reboost performance was nominal during FD11. Handoff to Orbiter control occurred at GMT 49/07:07:04 with the 13 degree maneuver to the reboost attitude beginning at GMT 49/07:09:26. The configuration 3 (VRCS – Vern Reaction Control System) reboost began at GMT 49/07:31:07 and had a duration of 33 minutes,” noted a MER shift status for Thursday morning.

Endeavour’s successful reboost added another tick in the mission task box on a flight that can also boast a call from the US President.

Only three items of interest were reviewed by the MMT, all of which do not relate to Endeavour herself. The first issue has already been cleared, following a breakdown and recovery of the Russian CO2 management hardware – called the Vozdukh – and the other two items relating to the recently completed EVA-3. 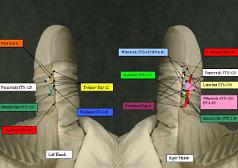 “EVA-3: EV1 Water Drops in EMU (3005). EV1 noted water droplets in his suit during EVA ingress. Observed on EVA 1 as well, will not drive a change to the return plan.

“EVA Glove report: Initial report is that additional imagery is required for assessment on EV1, will be collected later. EV2’s prime gloves are no-go for use due to loose RTV on the index finger.”

It is extremely unlikely another EVA would be required during the mission, with only an emergency repair to Endeavour’s Thermal Protection System (TPS) – via damage found during Late Inspections – or a failure of the Payload Bay Doors to close at EOM (End Of Mission) requiring a spacewalk solution. 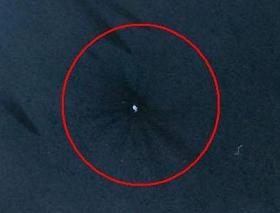 There are no areas of interest ahead of Friday’s Late Inspections, with the only addition to the FD2-3 inspections and RPM imagery coming in the form of a MMOD strike to the crew hatch window.

A well-rehearsed process of evaluation is put into play when a MMOD strike is recorded, which uses analysis tools to predict if – and how much – the crack will grow during the remainder of the flight, and during re-entry. 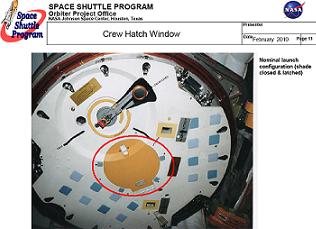 “Problem Impact/Significance: The Window PRT (Team) uses a statistical analysis tool to assess MMOD impact reports to predict probability of flaw growth. This analysis is based on residual strength test data and quantifies the probability of the flaw to maintain positive margin of safety (+MOS) on entry,” added a MER report on the impact.

“The analysis shows a 99.865 percent probability of maintaining +MOS on entry for the Side Hatch on defects < 0.20 inch diameter. Since the defect reported is estimated at < 0.20 inch diameter, there is no increase in risk associated with this defect on entry and the PRT recommends nominal EOM.”

The evaluations of even the smallest cracks are important, due to the obvious problem of a thermal pane cracking before or during re-entry, which would result in the loss of vehicle and crew (LOVC).

“Fault Tolerance: None, The thermal panes are crit 1/1 hardware. Remaining Controls: No controls exist. Redundancy: Full capability of the system is maintained. History / Previous Occurrences: MMOD impacts occur on orbit. The most recent report was during STS-126 where an MMOD impact was reported on Window #6.”

With the strike documented, engineers will evaluate a repair or replace approach for the window once Endeavour is back in her Orbiter Processing Facility (OPF). A full post-flight inspection is carried out by OPF engineers regardless.

“Current Status: No increase in risk for entry. Item can be closed. Post-Flight Plans: All windows, including W11, will be inspected post-flight to assure structural integrity for next flight per V7253.”

Endeavour is due to undock from the ISS at 7:54pm Eastern.