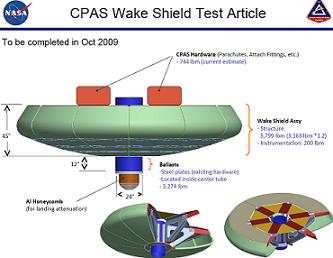 As the Constellation Program (CxP) splutters along, ahead of its “proposed” cancellation, managers have successfully concluded its Preliminary Design Review (PDR), although several major elements – such as cost and schedule – were omitted from the review due to the “new direction”. Meanwhile, NASA managers preparing a draft document to prospective commercial crew providers, listing 31 high level requirements.

The entire Constellation Program remains in limbo, as the FY2011 budget proposal undergoes a Congressional battle to – at the very least – refine specific goals and timelines.

The Ares vehicles are highly unlikely to return as per the POR (Program Of Record) via any refined plan, with lawmakers currently focusing on a shuttle extension, tied in with a Heavy Lift Launch Vehicle (HLV) – as outlined in the “Human Space Flight Capability Assurance and Enhancement Act of 2010” Bill.

However, until the FY2011 proposal is approved by Congress, elements of Constellation remains alive, as seen with the completion of the PDR process this month.

“After a week of pre-boards and boards, the CxP PDR was successfully completed,” noted MOD’s 8th Floor News address (L2). “All board members including independent review teams, voted to continue to the CDR (Critical Design Review).”

Interestingly, the PDR wasn’t as “complete” as previously planned, with the omission of several major Orion and Ares elements from the review.

“There were some areas of the design that we noted as still not at a PDR level of design. Those areas were Software (since claimed as complete via sources), CPAS (CEV Parachute Assembly System), and Upper Plane Isolator/LOX Damper designs (to mitigate Thrust Oscillation),” added the 8th Floor.

“The Board concurred that there are acceptable plans in place for FY10 to mature these specific designs.

“Additionally, the Ares Upper Stage/First Stage Separation Implementation will have a further assessment of zero fault tolerant versus one fault tolerant design.”

Also of interest were notes about the infamous Loss Of Crew (LOC) and Loss Of Mission (LOM) numbers, which have often been cited against the Commercial Crew options, and even Shuttle, during claims about astronaut safety. No specifics on the issues with the numbers are noted in the memo, other than “poke-outs” require further work.

“Another concern is the LOC/LOM requirements are not met for ISS (International Space Station) missions. The current estimates for LOC/LOM are within the error band of analysis, but additional work on specific LOC/LOM poke-outs will be analyzed.”

Despite these omissions from the PDR – any one of which may have resulted in an unsuccessful review – managers noted their pleasure in completing the process, noting the PDR was a “home run” for the Constellation Program.

“The final results showed that we have a sound design, and it is overall at a PDR level of maturity. We understand our risks and have good resolution plans for any open technical issues,” noted one Engineering manager in a memo (L2) to Ares manager Jeff Hanley and his team.

“The board was unanimous in concurring that we are ready to proceed towards CDR. In short, the team hit a home run!”

However, it was admitted that the future is uncertain, with Orion no longer in NASA’s hands, along with the challenges of a FY2010 operating plan which is currently the final year for CxP.

“I know that many of you are wondering what comes next. We have been directed to continue implementing the FY2010 operating plan. You also all know that we have challenges in FY2010 due to losing the Orion cost share, etc. Of course, there are multiple ways to attack the problem, and in order to be effective the program needs to do it in an integrated manner. More to come.” 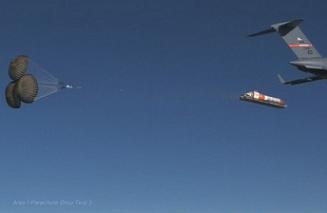 For the interim, the forward path continues to point towards at least one more drop test – the “Drogue Chute Test 3” in April, a PDR for the Constellation Training Facility (CxTF) and the aforementioned CDR.

“CxTF PDR Kick-Off (started) March 9, the Constellation Training Facility started its PDR cycle,” added the 8th Floor. “The CxTF team will show the entrance criteria and conduct tours of the facility. The PDR will conclude in mid June.

“CxTF is the last level 4 PDR leading up to the MOD PDR scheduled for July. The Mission Control Center System (MCCS) recently finished PDR and the Mission Operation RECON System (MORS) team is currently in their PDR cycle.”

As has been stressed before and after President Obama’s forward plan for NASA was revealed, handing over crew transportation duties to the commercial sector must follow strict NASA guidelines on crew safety.

Although the likes of the United Launch Alliance (ULA) have been claiming for some time that they are more than capable of fulfilling such requirements, issues such as abort-related “Black Zones” have often been cited by detractors within NASA, despite ULA’s documented evidence that such issues have already been addressed. 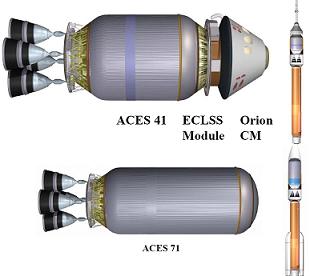 However, now the FY2011 proposal orders NASA to leave the business of human transport to LEO (Low Earth Orbit), NASA managers are closing in on a documented list of requirements, which commercial crew suitors will be tasked with showing their compliance.

Work should be completed on the document in the Spring, leading to a Request For Information (RFI) being sent out for feedback. Currently, the document cites 31 “high-level” requirements that a commercial carrier must adhere to.

“A draft document of these requirements will be released within the next two months, with an RFI to the aerospace industry for feedback. There are 31 high-level requirements,” added the Standup note. “These will be solidified at an Agency DPMC (Directorate Program Management Council).”