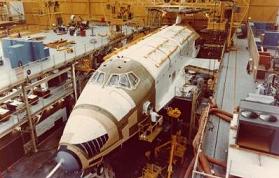 A team of engineers have completed evaluations into the condition of the test orbiter Enterprise, in preparation for a potential ferry flight to a new home – should the Smithsonian’s National Aeronautics Space Museum receive one of the current orbiter fleet as a replacement after they are retired. Those evaluations found no show stoppers for Enterprise’s potential ride atop of a Shuttle Carrier Aircraft (SCA).

Despite never flying in space, Enterprise  – otherwise known as OV-101 – had a major role to play for her offspring, and remains a vehicle of interest, even playing a role in the investigation into the Columbia accident.

Enterprise was constructed at Rockwell’s Air Force Plant 42 assembly facility in Palmdale, California – rolling out on January 31, 1977, for the 36 mile overland journey to NASA’s Dryden Flight Research Facility (DFRC) at Edwards Air Force Base for the approach and landing test (ALT) program.

Originally to be named Constitution, before a letter writing campaign by Star Trek fans resulted in her being christened Enterprise, she was used to demonstrate that the orbiter could fly in the atmosphere and land like an airplane.

The ALT program involved ground and flight tests, with Fred Haise and Gordon Fullerton, Joe Engle and Dick Truly all involved in testing Enterprise during approach and landing.

Five captive flights of the Enterprise mounted atop the SCA with the vehicle unmanned and her systems inert were conducted to assess the structural integrity and performance handling qualities of the mated craft. 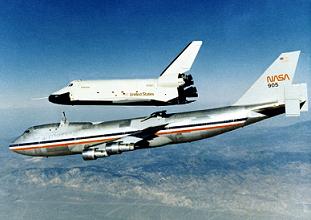 Three manned captive flights that followed, including an astronaut crew aboard the orbiter operating flight control systems while the orbiter remained perched atop the SCA. In the five free flights the astronaut crew separated the spacecraft from the SCA and maneuvered to a landing at Edwards Air Force Base.

In the first four flights the landing was on a dry lake bed; in the fifth, the landing was on Edwards’ main concrete runway under conditions simulating a return from space. The last two free flights were made without the tail cone, the spacecraft’s configuration during an actual landing from orbit.

The final phase of the ALT program prepared the spacecraft for four ferry flights, after which Enterprise was returned to the NASA hangar at the DFRC and modified for vertical ground vibration tests in 1978 at NASA’s Marshall Space Flight Center (MSFC), where she was mated with an External Tank, Solid Rocket Boosters – to be subjected to a series of vertical ground vibration tests. 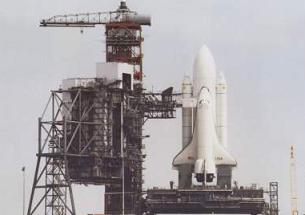 In 1979, Enterprise was ferried once again on the SCA, this time to the Kennedy Space Center (KSC), mated with an ET and SRBs, before being transported via a Mobile Launch Platform to Pad 39A. Enterprise served as a practice and launch complex fit-check verification tool representing the flight vehicles.

After several additional ferry flights around the country for orbiter testing, Enterprise went on a tour in 1983, taking in the Paris Air Show, a stop at Stansted Airport in England, trips to Germany, Italy and Canada, before returning to the DFRC.

Enterprise was then ferried to Vandenberg Air Force Base in California for fit checks at SLC-6 (Shuttle Launch Complex) and on to Mobile, Alabama, before being taken by barge to New Orleans for the United States 1984 World’s Fair. In 1985, Enterprise was ferried from KSC to Dulles Airport, Washington, DC, and became the property of the Smithsonian Institution.

Notes that a team of engineers had been sent to check Enterprise’s conditions first appeared on Shuttle Standup/Integration reports (L2). These evaluations were based on pre-emptive options for moving Enterprise to another venue, should the NASM win one of the current orbiters after retirement.

“Have a team going up to inspect Enterprise at the National Aeronautics Space Museum (Udvar-Hazy Center) to determine if it is in a ferry-able condition,” noted the first mention of the team being sent to check Enterprise. “There may be some desire to ferry it somewhere else after the Program and trade it out for one of our orbiters.”

Daily status reports on Enterprise’s evaluations and general condition (all available on L2) then followed this month, showing a great level of detail was being undertaken to check to see if the vehicle was in an acceptable condition to be flow on the SCA. The work was carried out while visitors were still able to view the test vehicle. 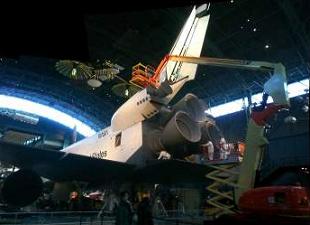 The biggest problem found was on the SCA attach point on the orbiter – known as the arrowhead fitting – which was corroded and in need of a repair.

“Cleanup of arrowhead fitting (fwd SCA attach point) continues. Substantial corrosion present. This is the worst we have seen so far. NDE will follow cleanup. LH elevon cove detailed inspection in work. Multiple fasteners had to be drilled out of outboard flipper door. Rework will be required,” added the status update, followed by an update in the Standup report.

“On the OV-101 inspection, the team is making good progress. Most of the vehicle looks to be in good shape. Did find substantial corrosion around the arrowhead fitting that will have to be reworked. Also, there is an area in the LH elevon where it will need some new work.”

As all the other areas of the vehicle were checked – mainly showing the craft was in a reasonably good condition considering her age, bar some minor corrosion – engineers worked on a procedure to repair the arrowhead fitting.

“NDE of arrowhead fitting complete. We were unable to perform eddy current inspection of barrel nut holes (4 locations). Barrel nut holes on OV101 are smaller than on the rest of the fleet. We will require a custom probe to perform this inspection. We will have to evaluate as part of phase II work.

“Continue to clean arrowhead corrosion. Dental molds of pitting to follow, ahead of entire area being chemfilmed to prevent further corrosion.”

A final sweep of the remaining areas of the vehicle then followed, as some of the hardware was removed for repair at the Kennedy Space Center, while the areas of greatest concern were checked via borescope inspections. 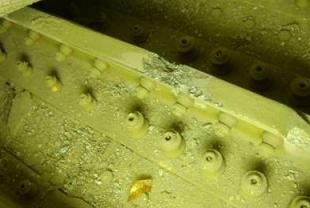 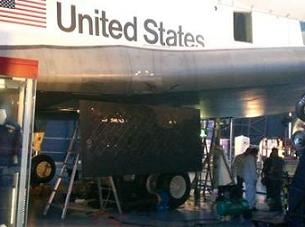 Final evaluation work last week related to the landing gear, which may be required for the towing of the vehicle out of the exhibition to a waiting transport to where the SCA would be waiting to ferry her to another location – although the forward plan has not yet been finalized.

“Cursory rigging checks of landing gear completed. All three gear uplocks were manually cycled and all hardstop contacts were verified. Several measurements were taken and will be checked against like measurements on flight vehicles as a sanity check,” added the report.

“RMG (Right Main Gear) uplock was ‘stiff’ and there appeared to be some misalignment in the up position hardstop. This will require further evaluation. The RMG fwd door hook was also installed backwards. We corrected this problem. NLG (Nose Landing Gear) door booster bungee will required further evaluation as well. It is designed differently than flight orbiters and did not function as expected.”

With the engineers completing their work – and due to arrive back at the Kennedy Space Center this week – the final note pointed towards Enterprise having no show stoppers for a ferry flight, should that option be taken.

“All of our inspection objectives were met. Overall, the vehicle is in good condition,” noted the team leader. “I want to make sure everyone understands when we have used the words ‘substantial corrosion’ that this means we suspect some form of corrective action will be required. The detected areas of “substantial corrosion” were few.

“My personal opinion is that they will not be show stoppers.”

Photos taken from hi-res collection in L2 Historical (over 900gbs of photos, presentations and videos from 1950s onwards), additional NASM photos and videos of Enterprise’s evaluations thanks to Ron Smith.