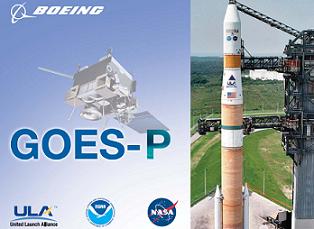 The United Launch Alliance Delta IV rocket has launched on its twelfth mission, successfully carrying the GOES-P weather satellite for the United States National Oceanic and Atmospheric Administration. Launch from SLC-37B at the Cape Canaveral Air Force Station occured at 23:57 GMT, following a short delay due to an alarm that was not related to the vehicle.

GOES-P is the sixteenth Geostationary Operational Environmental Satellite (GOES), and the last of the three current-generation GOES-N series spacecraft. Once it reaches its operational geostationary orbit, it will be renamed GOES 15. After several months of testing, it will be placed into on-orbit storage alongside GOES 14 to await the failure of an operational satellite.

The GOES-P spacecraft has a mass of 3,238 kg, including fuel and instruments. By the start of its operational life, this mass will already have reduced to 2,189 kg, mostly through the use of fuel to raise its orbit. It is expected to operate for ten years. Its solar panel, which carries dual-junction gallium arsenide cells, will provide 2.3 kW of power at the start of the satellite’s operational life, reducing to 2 kW by the end of its design life. These will charge a 24 cell nickel hydrogen battery capable of holding 442.8 kC (123 Ah) of charge.

GOES-P carries a number of instruments for monitoring both terrestrial and space weather. Its primary instruments for observing terrestrial weather are a five channel multispectral imager, which will capture images of the Earth in visible light and infrared, and a sounder which will be used for temperature and humidity profiling of the atmosphere. It also carries a solar x-ray imager which will monitor the Sun for signs of activity such as solar flares, which may affect Earth or other spacecraft in orbit.

Other instruments include a magnetometer for magnetospheric studies, and detectors to monitor background x-rays, ultraviolet radiation and cosmic particles. A new star tracker being flown aboard GOES-P is expected to significantly improve the accuracy with which its instruments are pointed.

The newer GOES 13 and GOES 14 satellites, launched in 2006 and 2009 respectively, are currently in on-orbit storage. GOES 13 is expected to become operational next month at the GOES-EAST slot, allowing GOES 12 to provide coverage of South America, a function which was lost with the retirement of GOES 10 in early December 2009. Although their meteorological payloads failed long ago, two older satellites; GOES 3 and GOES 7, are still operational as communications satellites.

GOES-P was manufactured by Boeing, and is based on the BSS-601 satellite bus. The satellite was built under a “delivery on orbit” contract, with Boeing responsible for providing both the satellite and launch services. Initially the Delta III was selected to launch all three GOES-N series spacecraft, however the satellite was subsequently reassigned to the Delta IV after the Delta III encountered reliability issues and was abandoned.

The US Federal Aviation Administration is responsible for providing a licence for the launch, which is officially considered to be commercial due to the nature of the contract.

The Delta IV is one of the two Evolved Expendable Launch Vehicles (EELVs) which were developed to compete primarily for US military launch contracts. It made its first flight in 2002, carrying the commercial Eutelsat W5 spacecraft. GOES-P is the last “commercial” payload on the Delta IV manifest, and since the type is no longer offered for commercial launches, it may mark its final commercial launch.

The launch will occur from Space Launch Complex 37B (SLC-37B) at the Cape Canaveral Air Force Station. SLC-37 was originally built for the Saturn I and IB rockets in the 1960s, and consisted of two pads, LC-37A and LC-37B. Pad 37A was never used, however several launches occurred from 37B before the complex was mothballed in favour of using LC-39.

It was demolished during the early 1970s, and remained dormant until it was selected as the East Coast launch site for the Delta IV. It was rebuilt in the late 1990s, and today’s launch marks the tenth from the complex since its reactivation. The Delta IV can also launch from Space Launch Complex 6 at Vandenberg, however this pad is currently being modified to accommodate the larger Delta IV Heavy configuration. The first Heavy launch from Vandenberg is currently expected to occur no earlier than January 2011. 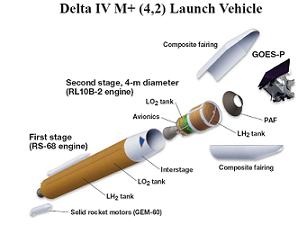 The Delta IV rocket which will be used for today’s launch is Delta 348. It will fly in the Medium+(4,2) configuration, meaning that it has an upper stage and fairing with a diameter of four metres, and two solid rocket motors augmenting the first stage at lift-off. This is the most-used configuration; making is fifth flight.

The Delta IV is a two stage rocket. The first stage, or Common Booster Core, is powered by a single RS-68 engine fuelled by liquid hydrogen and oxidised by liquid oxygen. Two GEM-60 solid rocket motors will be used to provide additional thrust during the first minute and a half of flight. The second stage is propelled by an RL10-B-2 engine, which also burns liquid hydrogen in liquid oxygen.

Five and a half seconds before launch, Delta 348’s RS-68 engine will ignite, followed at T-0 by the solids. The rocket will lift off and begin climbing away from Cape Canaveral along an azimuth of 95 degrees.

Eighteen seconds into the flight the rocket will begin manoeuvring to a zero-angle-of-attack orientation to minimise stress on the vehicle. Around a minute into the flight, Delta 348 will experience maximum dynamic pressure, or max-Q. Thirty four seconds later, the two GEM-60 motors will burn out, and after a further six seconds the spent casings will be jettisoned.

Two minutes and four seconds after lift-off, the rocket will complete the zero-angle-of-attack phase of flight. Three and a half minutes into the flight, Delta 348 will experience maximum acceleration, and the RS-68 engine will be throttled down to prevent higher acceleration, which may damage the rocket or payload. Four minutes and twenty seven seconds into the flight, the first stage engines will cut off. 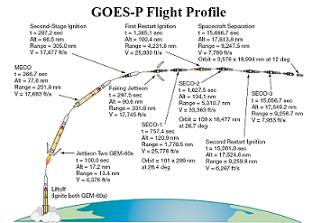 Delta 348 will then coast for six seconds to allow residual thrust to tail off, before the first stage will separate. Fifteen seconds after staging, the second stage will ignite for its first burn. Ten seconds later the fairing will separate from around the spacecraft.

The first burn will last seven minutes and fifty seconds, and will be followed by a coast phase lasting ten minutes and twenty eight seconds. After this, the stage will restart and perform a second burn lasting four minutes and forty seven seconds.

Three hours, forty two minutes and eight seconds later the stage will restart again to begin its third burn. This burn will last fifty six seconds, and will serve to raise the perigee of the vehicle’s orbit. Ten minutes and thirty seconds after the end of the third burn, GOES-P will separate from Delta 348 into a geosynchronous transfer orbit. The upper stage will then perform a collision avoidance manoeuvre.

The target orbit for the GOES-P mission has a perigee of 6,623 kilometres, an apogee of 35,177 kilometres, and 12.0 degrees of inclination. From this orbit, GOES-P will raise itself into geosynchronous orbit using an onboard apogee motor which generates 490 newtons of thrust.

The next GOES satellites to be launched will be the GOES-R or GOES-NEXT series. The first such satellite is not scheduled to launch until October 2015 at the earliest. The next US weather satellite launch is scheduled for 2011, when a Delta II will launch the NPP-Bridge spacecraft. NPP-Bridge was intended to close a gap in coverage between the TIROS and NPOESS programmes; however NPOESS is now expected to be cancelled.

The next Delta IV launch is scheduled for 17 May, with the GPS IIF-1 satellite. This will be the first in a series of new GPS satellites, and the first GPS satellite to be launched on an EELV. Like GOES-P, that launch will use the Delta IV-M+(4,2) configuration. Two further Delta IV launches are planned for 2010; NRO L-32 on a Heavy in October, and GPS IIF-2 on a Medium+(4,2) on 22 December.

United Launch Alliance’s next launch will be of an Atlas V 501, carrying the X-37B OTV-1 spacecraft. This is currently scheduled for launch on 20 April.