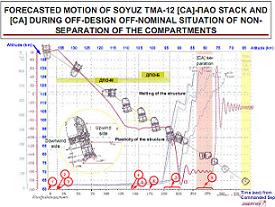 Expedition 22 commander Jeff Williams and Russian flight engineer Maxim Suraev have landed in the steppes of Kazakhstan at 11:24 GMT on Thursday, following the undocking of their Soyuz TMA-16 from the International Space Station (ISS). Meanwhile, ISS managers have reviewed the status of the orbital outpost, including a major debate on STS-133’s addition to the Station.

However, no issues have been suffered with the vehicle since an investigation found that the most likely cause of the previous failures related to an open the latch located at ‘Plane I’ interface.

“This was a failure of the 8 X 55 explosive bolt, caused by combined long-term exposure, under space flight conditions, to electrical discharges resulting from the difference in potential between the station hull and the surrounding plasma, which increased in magnitude after the electrical power capacity of the ISS was augmented,” noted the Russian investigation presentation, avaiable on L2.

The findings relating to the long-term exposure to electromagnetic emissions on-orbit, and their potential to cause issues with the pyro bolts, came after an extensive investigation that included the removal and return of one pyro bolt from Soyuz TMA-12.

Williams and Suraev bid their final farewells Wednesday at 3:40am GMT, and climbed aboard their Soyuz TMA-16 spacecraft before closing the hatches. Undocking took place at 8:03am GMT.

Very cold weather and gusty winds met Williams and Suraev at the landing site, while Russian and NASA personnel stayed overnight in nearby Arkalyk to assure a swift recovery of the crew. Weather permitting, four additional helicopters will depart from Kustanai Thursday and refuel in Arkalyk en route to the landing site to assist with the recovery.

FRR and SSPCB status on Soyuz and ISS:

Ahead of the duo’s return, NASA and Russian engineers held a Flight Readiness Review (FRR), which also included the April launch of Expedition 23 crewmembers.

“On board ISS, Williams and Suraev prepare for their departure, working on the standard end-of-increment cleanup preparatory to their return to Earth on 3/18. The Expedition-23 crew of Alexander Skvortsov, Mikhail Kornienko, and Tracy Caldwell-Dyson prepare for their Launch to ISS on or around April 2, 2010.”

As part of the FRR, managers also discussed the cause of several false fire alarms on the ISS – citing dust contamination as the likely cause.

“MOD presented our readiness. MOD is go for launch and the increment with the following issues noted: False dP/dt alarm from MRM-2 was reviewed: when ventilation is interrupted, the smoke detectors cannot perform,” added the notes. “Dust contamination (dust bunny) in a smoke detector was the likely cause of the smoke detectors sensing a false fire.

“Without ventilation, these false indications will not clear, so in the event of a false dP/dt alarm, smoke detectors will be inhibited until ventilation is restored. This will be reviewed and will occur as a normal ISS software upgrade.

The SSPCB also approved updates to the Emergency Procedures Book relating to “US SD Response to MRM-2 Annunciations”.

Other items of interest discussed by the SSPCB included the vital need for utilizing downmass capability from the shuttle before the fleet is retired. While this loss of capability will seriously hinder science on the ISS, the board was referencing the issue of not having enough space in the ISS for stowage.

“Other significant Mission Overview Questions/Issues: Violation-Risk ‘On Orbit stowage Short Fall’: Stowage will begin to intrude into restricted and habitable volumes. Mitigation is to maximize return on the upcoming (shuttle) flights. Expect stowage to be a discussion point on all future FRRs to update mitigation efforts,” added the SSPCB. 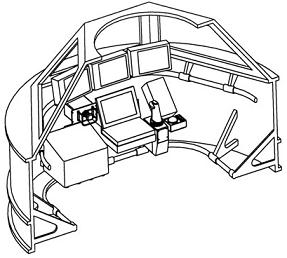 “Cupola and RWS (Robotic Work Station) interference-panel needs to be modified or airflow behind RWS will be short circuited. A new panel will be built on the ground; therefore the Cupola will not be available for RWS use on the next flight.”

“T-valve poppet missing retaining ring was cause of urine loss (five percent) due to back flow into system. Will fly a new retaining ring and engineering working long-term fix,” the notes continued. “2A Solar Arrays: No gross damage noted in photo survey. Forward work to determine if there is some damage to a joint area that is causing issues with loading, or clear array structurally.”

STS-133’s Addition of the PMM Review:

With Discovery set to fly the final shuttle mission of the “current” manifest, ISS managers have been discussing the arrival of STS-133’s main payload, the PMM (Permanent Multi-purpose Module) – which is already seeing a level of strain on its readiness schedule.

“Significant SSPCB Issues: The major issue that occupied most of the SSPCB was the overall technical and schedule issues to prepare the Permanent Logistics Module (PMM) for launch and integration as an additional ISS module to be used primarily for stowage,” managers noted.

“PMM continues to move forward toward flight on ISS. On-orbit orientation for PMM is the same as MPLM-no orientation changes. Removed 178 lb of equipment from PMM for permanent installation on ISS.”

As previously noted, should issues with STS-134’s AMS payload result in a large slip, STS-133 will be unable to move forward due to the critical path for the conversion of the MPLM into a PMM. 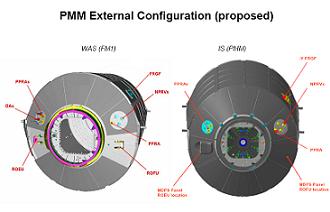 “KSC internal integration modifying the insides of the MPLM to turn it into the PMM is the critical path to make STS-133/ULF5 for 9/16 launch. Right now, there are just three days to modify the PMM interior. Schedule is still under negotiation with SSP (Space Shuttle Program).

The conversion also holds impacts for the module’s Caution and Warning (C&W) system, which may require a confidence test ahead of installation into Discovery’s Payload Bay.

“MOD have an action to assess the impacts to override the C&W messages for the case of the hardware being removed – MOD is aware and assessing. There is a plan in place to perform a confidence test if the s/w is modified,” added the notes.

“The Program gave an action to do KSC software testing on the ground possibly using Flight Module2 with modifications – and then potentially upload after PMM is on-orbit if there is not enough time for full KSC integration. MOD will participate in the resolution of this action.

“Assess the operational inhibits needed on the PMM in the event the software modification is not made. PMM does not have capability to annunciate C&W alarms-an exception will be applied since PMM only used for storage with hatch open with smaller exposure to crew in module.”

Other items of interest related to the MLI insulation and the potential need for a future EVA via the Space Station Remote Manipulator System (SSRMS) to resolve a heat transfer path issue.

“MLI will not be pre-integrated to exterior trunion scuff plates on PMM-leaving a heat transfer path. If condensate builds up on the interior, the Program will consider a future SSRMS-based EVA or put additional ventilation into the PMM.

“Note-there are no EVA handrails for external access to add MLI; an EVA will have to be SSRMS-based. Quick release pip pins are to be added prior to flight to the structural rods holding the +/-Y and –Z panels. This will help with maintenance.”

Such an EVA would not become part of STS-133, as managers close in on officially reducing the crew size to four – in order to create as much upmass potential for the mission.