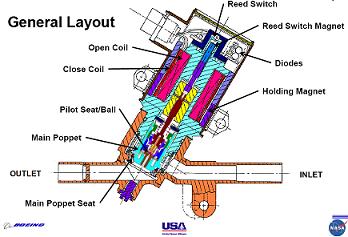 A full set of testing on the primary and secondary regulators on Discovery’s Right Reaction Control System (RRCS) – located downstream of the leaking helium isolation valve – has being classed as a success. The health of the system’s redundancy will boost the chances of managers approving flight rational at the upcoming Agency-level Flight Readiness Review (FRR).

Rollback and a three month delay for STS-131 is still not being ruled out, although it has become far less likely due to the two sets of testing on the RRCS’ regulators. Even prior to the weekend testing, managers were concentrating on “next failure” impacts related to the system during flight – another element of approving flight rationale.

Armed with test data and flight rationale information relating to impacts to the mission should the situation worsen on orbit, managers will conduct a special PRCB (Program Requirements Control Board) meeting on Tuesday to prepare for Friday’s FRR.

“MOD (Mission Operations Directorate) has been looking at Right RCS next failure ops impacts. Will be going over the charts to go forward for the RCS Helium ISO Valve on OV-103 (Discovery),” noted a status update on the latest Shuttle Standup/Integration report (L2).

“The intention is not for this to be the final product, but a health check of where it is at and see if anyone else has any ideas. There is a Special PRCB on Tuesday to talk special topics before FRR.

“All Managers should make sure that your backups are at the reviews, Special PRCBs, and all the presentations that are going on to review the work for STS-131. We have a great team with a lot of depth and talent, so make sure the right people are at the right meetings as we move forward. We have about two weeks before launch, on April 5. We are into the final timeframe.”

The last time a special PRCB meeting discussed a pre-flight issue was during the Flow Control Valve (FCV) issue ahead of STS-119. STS-131’s Special PRCB will discuss both the helium isolation valve and a Solid Rocket Booster (SRB) Rate Gyro Assembly (RGA) issue (article to follow this week).

The issue was first noted during hypergolic loading, when several IPRs (Interim Problem Reports) were charged against the OMS/RCS system. All were cleared bar the IPR-33, which noted: “While performing the Aft RCS fuel tank vents, the RRCS Fuel He tank pressure dropped, indicating a leak through the He Isolation Valves. All attempts to resolve this issue were unsuccessful.”

Engineers immediately pursued pre-written troubleshooting methods, attempting to close the valve and check to see if it was either obstructed from seating, stuck in an open position, or leaking. Five troubleshooting attempts all failed to slow the leak rate.

As far as the root cause, engineers concluded that without inspecting the valve – which can’t be accessed without the OMS Pod being removed – the most likely problem relates to the poppet of the valve.

“The failure appears from the main poppet (not fully seated). With only the pilot stage flowing, the propellant tank pressure does not increase anywhere near the rate that it did during the pre-loading helium tank pressurization,” noted one of eight new presentations from late last week, all available on L2.

“There has to be some main stage flow to account for the relatively fast prop tank pressure response observed during the pre-loading helium tank pressurization.” 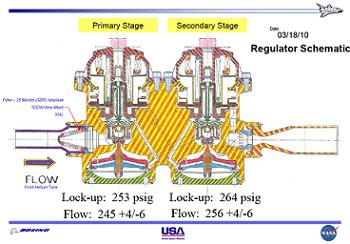 Subsequent testing was called for, in order to ensure the two regulator valves – downstream of the faulty helium isolation valve – were in good order. Due to their provision of redundancy, a problem with one or either of these regulators would have caused problems for efforts to approve flight rationale.

Testing during the week and at the weekend found no problems with the regulators, thus aiding the potential the system can fly “as is” – pending PRCB and FRR level approval.

“RRCS fuel helium tank was pressurized to ~2500 psia and the primary regulators were monitored for leakage. Primary regulator leakage indicated in-spec (less than 400 scch). Vehicle ullage transducer has an accuracy of 0.8 psi and test was performed for ~10 hours,” noted an overview presentation outlining the midweek test.

“No adverse trends for the regulators. Regulators function and leakages have been in-spec and consistent.

The weekend testing also had the benefit of a test panel system, which allowed for closer monitoring of the regulators for the test. During the process, both system legs were flowed through significantly, before the primary regulator was locked for a leak “creep check”.

Mission Management Team (MMT) manager Mike Moses noted on Sunday that it appears the regulator(s) performed well, mirroring the test performed earlier in the week – but this time with a significant flowrate for a significant duration.

“Plan is to perform primary regulator flows with the portable panel to simulate in-flight flow rates to demonstrate system integrity and flowrates. No secondary regulator tests or leak checks,” pre-empted one PRCB presentation on the weekend test. 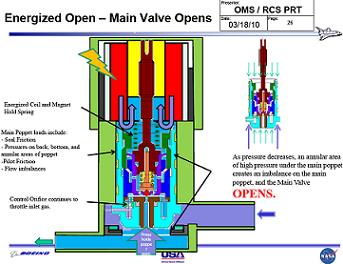 “Helium isolation valve and regulator flow test at 150 SCFM is planned for March 20/21. Pressurize system to ~1800 psi. ‘A’ Valve Open and ‘B’ Valve Closed. Flow to less than regulator lock-up. Repeat above with ‘A’ Valve closed and ‘B’ Valve open.

“Repressurize system to ~1800 psi. ‘A’ and ‘B’ Valves open. Flow to primary regulator lock-up. Monitor primary regulators for any potential creep to be compared to troubleshooting performed on March 16.

“Goal is to flow through system to potentially remove any contamination on isolation valve and assess possibility of moving any particulate downstream which could cause consequences for regulators or valve orifice. This test may provide additional insight as to which leg and which valve is the problem.

The positive testing leaves managers with a flight rationale discussion, both at the Special PRCB and FRR meetings. This appears likely to be approved, thanks to the performance of the regulators. 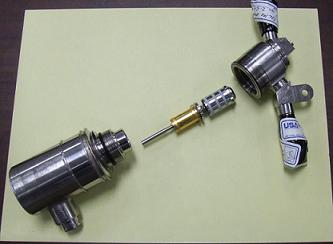 Also set to become an item of discussion at the meetings is the worst case scenario of the primary and redundant systems failing early in the mission, resulting in what is known as a burst disc. While the crew would not be in any danger, the resulting leakage – or blowdown in the case of both regulators being lost – early in the mission would be the worst outcome, ending the mission early.

“Worst case is early in mission when quantities are high and ullage volume is at a minimum as this minimizes blowdown capability,” added another presentation. “Single pod quantity redline would be violated which results in a NPLS (Next Pass Landing Site).”

“Regulator leak/creep: If both the primary and secondary regulators are leaking in such a way that the downstream tank pressure is rising and the valve won’t close, pressure can be managed by using propellant. It is worth noting, that having one RCS helium press valve open is standard operating config.

“Closing valves to due to leg creep/leak is rare. Have had leaking regs in past for which we have closed both sets of helium press valves (e.g. STS-110).”

Further articles will follow in the run up to the FRR.