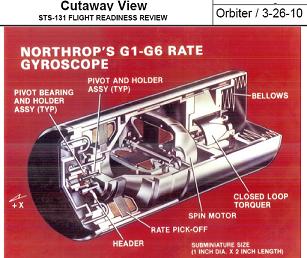 With Discovery’s payload now installed into the orbiter’s Payload Bay, all eyes are on Friday’s Agency Flight Readiness Review (FRR). Several items of interest are under review, all of which have flight rationale decisions to allow STS-131 to launch on April 5. One item of interest with the Solid Rocket Boosters (SRBs) already has flight rationale in place, following a test failure on a Rate Gyro Assembly (RGA).

Discovery remains in a nominal flow towards the April 5 launch date target, as processing milestones continue to be reached with a few days of contingency still in the team’s back pocket. The latest milestone came via the installation of the STS-131 payload.

A small Problem Report (PR) was charged to the processing flow, and resolved by the time of the latest processing report, although a second cracked tile has been found during inspections of Discovery’s ceramic inserts – which is undergoing engineering evaluations.

“PR 5547 was taken for a crushed convoluted tubing adjacent to connector in the aft compartment. Repair and retest was completed. An additional tile was discovered cracked on window 6. Engineering evaluation is in work,” added the report, noting the ceramic insert inspections are continuing on other areas of the orbiter, for the purpose of flight rationale.

An outline on the FRR effort relating to the inserts will be provided on Friday, along with the status of the other items of discussion.

Each SRB contains two of the RGAs, with each RGA containing one pitch and one yaw gyro. These provide an output proportional to angular rates about the pitch and yaw axes to the orbiter computers and guidance, navigation and control system during first stage ascent flight in conjunction with the orbiter roll rate gyros until SRB separation.

At SRB separation, a switchover is made from the SRB RGAs to the orbiter RGAs.The SRB RGA rates pass through the orbiter flight aft multiplexers/ demultiplexers to the orbiter GPCs (General Purpose Computers). The RGA rates are then mid-value selected in redundancy management to provide SRB pitch and yaw rates to the user software. The RGAs are designed for 20 missions.

No issues have be reported with the RGAs for several years, until a test failure this month led to an effort to clear the related units for the flight of Discovery’s boosters.

“Concern: Similar failure during (STS-131) ascent could cause erroneous output data from an SRGA.

Flight history and risk assessment – along with the redundancy in the system – all played a part in aiding the path towards gaining flight rationale for STS-131, while engineers will spend additional team carrying out further checks for downsteam missions in an effort to understand root cause and any potential foward work.

The option to replace the unit(s) at the pad was available, although a there was a slight risk this would push out the launch date by a number of days. This would have been an unlikely option to take, given the confirmed health of Discovery’s SRB RGAs. 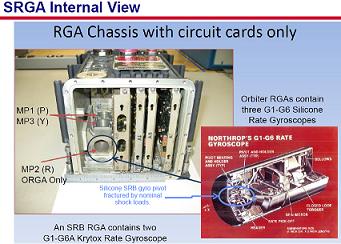 “SRGAs with Krytox gyros were certified by test for 24 pyro shocks. No Krytox Gyro pivot/bearing failures since 1995 upgrade. Only one previous Krytox gyro failure of 6-position test, attributed to FOD in bearing. Four SRGAs for redundancy,” noted the risk assessment portion of one of the three main presentations on the problem.

Given the unit which suffered the problem is not part of the STS-131 stack, along with a good track record for the units that will fly with Discovery’s boosters, flight rationale is already in place ahead of Friday’s Agency FRR.

As noted by the presentation, the RGAs will recieve a final health check at T-3 hours in the countdown, although it is highly unlikely they would become a problem given their track record.