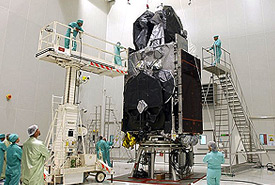 The Teal Group – a defense and aerospace consulting firm that provides intelligence to government and industry – estimates 2,229 space payloads will be launched to Earth, Lunar and deep space trajectories from 2010-2029. The Virginia-based group is also predicting a bright future for SpaceX’s Dragon, and Orbital’s Cygnus capsules, as they prepare to come on line to resupply the International Space Station (ISS).

“Our payload count for the next 20 years is nearly 10 percent higher than it was a year ago,” said Marco Caceres, lead analyst for Teal Group’s World Space Systems Briefing which features the Mission Model. “In our previous study, we identified 2,033 payloads worldwide.

“During the past year, we have included more than two dozen additional commercial geostationary communications satellites that have been ordered or planned by companies such as Intelsat and SES Global. We have also added dozens of nanosatellites and picosatellites for commercial systems such as GeoOptics’ Cicero and for the US National Reconnaissance Office.”

The Mission Model, which serves as a gauge of the payloads that are being proposed to be built or may be required in order to replenish systems that are currently in orbit, provides a base from which to forecast those satellites, probes, capsules, and manned missions that are most likely to be completed and launched.

“There is a rationale method for forecasting the future of the market, and the first step is to be skeptical about any system proposed by any company or government, but to include everything in your analysis and then proceed to filter out what you think is real or fantasy,” added Caceres.

“At least half of the payloads that are announced never receive enough funding to be built and launched, but you still have to factor them into the equation as you develop a picture of what the future may look like.”

Civil and commercial payloads continue to dominate the future launch manifests, making up for 77 percent of the estimate, while military and university payloads account for 19 percent and four percent respectively.

Sixty-two percent of the payloads in the Model are destined for Low Earth Orbit (LEO) and 23 percent for geostationary orbit (GEO), with the remainder designated for medium earth orbit (MEO), elliptical orbit, or deep space trajectories.

The high volume of LEO payloads can be attributed to a mix of ISS missions, nanosatellites and picosatellites, and replenishment satellites for mobile communications constellations such as Globalstar, Iridium, and Orbcomm.

Once broken down, approximately one-quarter of the civil payloads are crew transfer and resupply capsules for the International Space Station (ISS) missions. With the current plan resulting in the loss of the space shuttle, and no follow on replacement vehicle (Orion), Teal note that the door has been opened for SpaceX and Orbital Sciences to establish a presence in this market.

“Particularly now with the Obama administration’s cancellation of the Constellation program to develop a follow-on to the Space Shuttle and allow industry to pioneer the commercialization of human spaceflight,” Caceres noted.

Even if a final push to extend the space shuttle past 2010 proves to be successful, SpaceX and Orbital will still be required to fulfil their Commercial Resupply Services (CRS) contract obligations – even though the deal was initially set up to help ease the ISS’ loss of shuttle superior upmass ability.

The CRS contract – part of the Commercial Orbital Transportation Services (COTS) program, with funding coming from NASA’s Space Act agreements – will cover at least 44,000 pounds of a 150,000 lbs requirement, joining with the cargo fleet of vehicles such as the European ATV, Japanese HTV and Russian Progress. 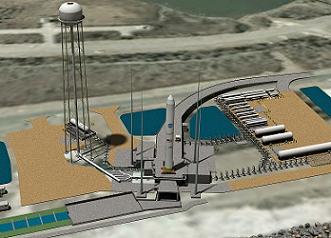 Orbital’s Cygnus spacecraft is to be launched aboard the medium class Taurus II rocket – and will be capable of delivering up to 2,300 kg of cargo to the ISS.

Both spacecraft hold the potential to supply NASA with the option of launching astronauts to the ISS, an ambition also held by the United Launch Alliance (ULA) – who have been evaluating a capsule, and even the Dreamchaser spacecraft – atop of their Atlas V launch vehicle.

However, commercial providers of a manned capability will face strict rules based on NASA’s own Human Rating rules. A draft document – containing 31 “high level” requirements will be sent to industry partners under a Request For Information (RFI) in April, providing an element of guidance to potential commercial carriers of NASA astronauts.

Caution was also noted this month via an Aerospace Corporation document, which pointed to both a lack of complete auditing of the claims made by commercial partners, and the likely costs of providing a vehicle close to that which would have been seen via the ISS Orion (four person) – costs that would be above and beyond the proposed $6 billion (over five years) provided in the FY2011 budget outline.

However, insiders claim the Aerospace Corporation findings – requested by the pro-Ares Gabrielle Giffords, Chairwoman Subcommittee on Space and Aeronautics Committee on Science and Technology – provide little by way of answers, and base most of their data on the least viable commercial option of launching a crew capsule on a Delta IV-H.

Any potential refinement to the FY2011 plan would likely keep the commercial crew option intact, with the key areas of interest relating to shuttle’s potential extension, and the roadmap for a Heavy Lift Launch Vehicle (HLV). It is highly unlikely the Ares program could gain a reprieve.