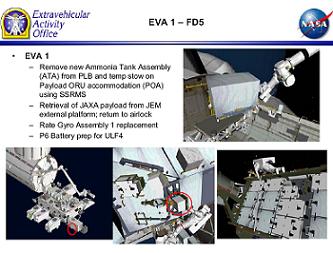 Flight Day 5 (FD-5) for STS-131 has seen the completion of the first of three scheduled EVAs (Spacewalks) of the mission. Astronauts Rick Mastracchio and Clay Anderson performed all of the EVA tasks, placing them in a good stance for the remaining two EVAs for this flight. Meanwhile, the Damage Assessment Team (DAT) have cleared Discovery’s TPS (Thermal Protection System) from any requirement of a Focused Inspection.

The main focus for the Discovery/ISS crew today will be the execution of the first EVA for the STS-131/19A flight as well as the continuation of internal supply transfers to and from Discovery’s middeck and the MPLM Leonardo.

Waking up at 8:51 p.m. EDT (April 8), Discovery and the ISS crew got right to work with final preparations for Flight Day 5’s spacewalk.

First up was the repressurization of the Quest Airlock from its overnight pressurization (10.2 psi) for EV crewmember campout operations to nominal Earth sea-level for a much-needed hygiene break for Rick Mastracchio and Clay Anderson.

Following that short break, Mastracchio and Anderson re-entered the Quest Airlock and the airlock was once again depressurized to 10.2 psi.

MPLM transfers are currently scheduled to pick up at 11:11 p.m. EDT (April 8th) while Rick and Clay are donning their respective EMUs (Extra-vehicular Mobility Units – spacesuits).

Per the timeline (which EV crews on numerous recent missions have worked well ahead of), complete Airlock depressurization that began at 1:11 a.m. EDT with Rick and Clay taking their spacesuits to battery power at 1:31 a.m. – officially beginning the EVA.

First up on the EVA-1 timeline was the retrieval of the FBG by Rick Mastracchio while Clay Anderson released the currently-attached-to-the-S1-truss ATA’s (Ammonia Tank Assembly’s) Fluid Quick Disconnect.

Next, the two astronauts transversed into Discovery’s Payload Bay (Rick first followed by Clay 30-minutes later) and performed a series of release and handoff preparations for the new ATA that rode uphill on Discovery.

The new ATA was released from its payload carrier and handed off to the SSRMS (Space Station Remote Manipulator System – robot arm). 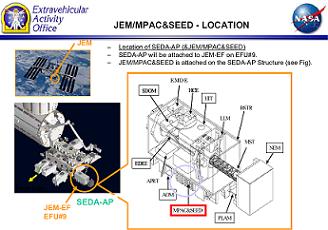 Next, Rick and Clay retrieved and installed the ABG before moving to the S0 truss of the ISS to Remove and Replace a Rate Gyro Assembly. Due to a clearance issue, Rick had to remove the near-by TERA, in order to free the RGA.

After that, Clay was to translate out to the P6 truss – joined one hour later by Rick – to perform the final scheduled task of the EVA: “P6 battery preps.” However, that was deleted and replaced with a task for Clay to work on several P clamps.

Following the completion of tasks, Rick and Clay performed EVA-1 cleanup activities before ingressing the Quest Airlock about 6.5hours after the start of the EVA.

The crew will then spend the remainder of the Flight Day performing Post-EVA servicing operations, MPLM transfers, and preparing for a much deserved sleep period. 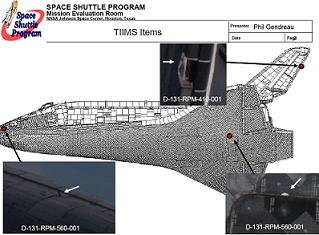 In all, the DAT (Damage Assessment Team) has been able to clear several areas of Discovery TPS for reentry already – despite limited downlink capability with the vehicle prior to docking with the ISS Wednesday morning.

Areas still requiring DAT review include the Port and Starboard Forward Fuselage, the Port T0 umbilical plate and surround TPS, the remaining OMS Pod regions (white TPS tiles and TPS blankets), the “Leading Edge of the VERT,” and the ET umbilical doors for assurance of proper door closure and sealing for reentry.

Overall, there are only three (3) areas of Discovery’s TPS currently under investigation by the DAT: the Rudder Speed Brake, the Forward Reaction Control System pod, and one tile adjacent to an ET umbilical door. 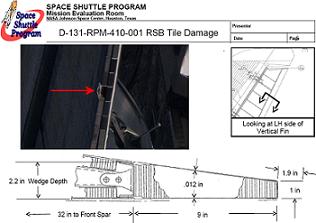 The first, and primary area of concentration for the DAT is the loss of a TPS tile on Discovery’s Left Hand (LH) Rudder Speed Brake (RSB) ~42-seconds after liftoff.

Based on ascent imagery assets, a portion of one TPS tile on the trailing edge of the LH RSB was seen breaking away and harmlessly falling aft of the vehicle.

On orbit imagery of Discovery’s RSB during the R-bar Pitch Maneuver (RPM), performed about one hour prior to docking with the ISS, confirmed what is believed to be only a partial tile loss and charring on the AFT edge of nearby vehicle structure.

“Visible charring along the AFT edge and visible signs of SIP and densification layer on sidewall,” notes the initial summary analysis. 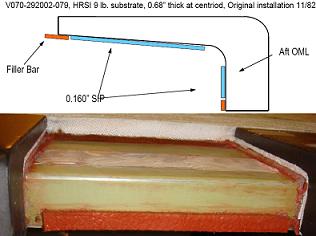 While initial RPM photography captured by crewmembers onboard the ISS confirmed the apparent partial tile loss in the area, additional photographs that will yield more information on the current state of this area of Discovery had not yet been reviewed/analyzed at the time of the FD-3 DAT summary publication.

Nonetheless, “Damage is located on the trailing edge of the LH Upper Rudder Speed Brake Panel Assembly,” notes the summary.

This trailing edge wedge is 9-inches wide with a variable depth along the XT axes. Facesheet thickness in the area is 0.012-inches. 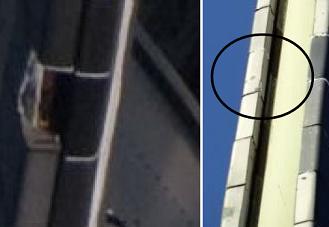 TPS tiles in this area extend ~1.9-inches “over the trailing edge wedge [and] cover approximately half of full depth of honeycomb STR,” notes the summary presentation.

The tile was originally installed onto Discovery’s RSB in November 1982.

Currently, ascent/descent Aeroheating environments have been provided to the DAT and thermal model development is in work. 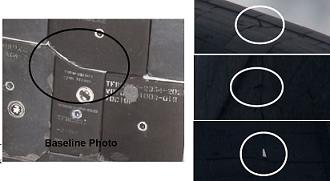 The protrusion is estimated at 1.2-inches in height, though additional inspection video and photos from ISS had not yet been reviewed at the time of the summary’s publication.

The final TPS area of note is along the port ET umbilical door perimeter. 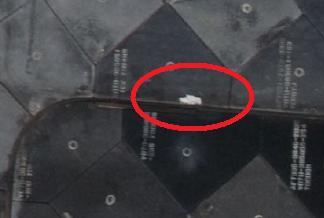 The damaged tile itself is 12 lbs in weight, 1.21-inches thick, and was installed in June 2004 ahead of Return To Flight operations.

The damage is estimated at 1.21-inches in length and 0.5-inches in width (accurate to 0.15-inches based imagery assets).

In all, Discovery’s TPS is in good shape and no Focused Inspection is required on any part of the vehicle.