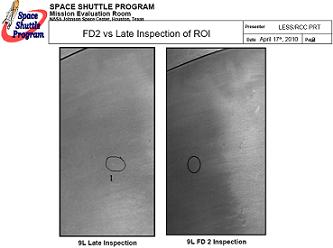 Shuttle Discovery and her seven member crew will spend another day on orbit, following the wave off of both Kennedy Space Center (KSC) landing opportunities due to poor weather. A Group C powerdown on the orbiter – conducted on Sunday – enabled the ability to remain in space through to at least Wednesday, with Discovery’s Californian option available from Tuesday.

Unacceptable weather conditions put pay to both KSC opportunities, which would have seen Discovery take in what is currently scheduled to be the last descending node entry – pending manifest slips or additional flights past the summer months – which will take passes over numerous American towns and cities for the first time since Columbia.

For the second of the two landing opportunites, flight controllers left the wave off decision to the latest possible moment, as conditions initially improved, before low cloud and fog passed over the Shuttle Landing Facility (SLF).

EOM+1 (End Of Mission Plus One Day) will include landing opportunties at the Dryden Flight Research Facility (DFRC) at the Edwards Air Force Base (EAFB), along with several KSC options – which will once again take in an overhead return over a large part of the United States.

Interestingly, if Discovery is forced to land at Dryden – and thus spend around a week in California for ferry operations – this will delay the turnaround of STS-131’s MPLM Leonardo, which is scheduled to be modified into a PMM for STS-133 – already under the constraint of a tight schedule.

STS-133 is currently scheduled to be the last flight, although major delays are expected for the preceding STS-134 – due to its AMS-2 payload problems during ongoing testing – resulting in a major manifest meeting this week. Ultimately, managers always prefer to land the orbiters at KSC to avoid additional processing turnaround issues.

Thanks to the fine efforts of the Damage Assessment Team (DAT), Level I, Level II and the peer review of all the imagery taken via the Orbiter Boom Sensor System (OBSS) – and downlinked via ISS Ku-Band assets due to the unavailability of Discovery’s own Ku system – was completed in an extremely prompt manner, clearing the orbiter for entry.

“LESS/RCC team cleared all late inspection regions of interest,” noted the DAT presentation (L2) on what was an increase number of ROIs (Regions Of Interest) – higher than the four previous flights, potentially due to the difference between nominal and docked Late Inspection techniques.

However, none of the ROIs were of any concern, which baseline imagery showing no change to the most obvious areas of “damage” – all of which are cosmetic and minor.

Discovery then enjoyed a nominal undocking, completing a one and a half lap flyaround of the ISS, prior to separation burns that increased the distance between the two spacecraft. 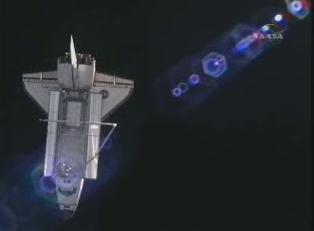 “There was no issue with these firings. They are allowed within the procedures and are covered by the separation database used for pre-flight analysis. 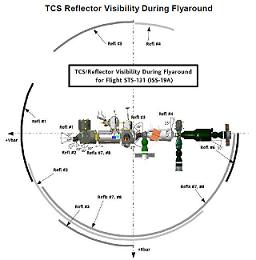 “Flyaround was nominal. It began just outside the CG-CG range of 400 ft. A CG-CG range > 600 ft was reached prior to -RBAR crossing. Loads on US PV arrays were very low, due to the lack of Y firings,” added ISS structures. “Peak loads on any ISS hardware occurred on the Progress PV arrays for the vehicle on the DC1 nadir. The interaction equation results for these arrays were approximately 21 percent of the limit load constraint.”

As scheduled, Discovery’s crew checked out the orbiter’s Flight Control Surfaces (FCS) and Reaction Control Systems (RCS), while completing the Group C powerdown to conserve cyros in her Fuel Cells and cabin stows ahead of entry.

Auxiliary Power Unit 1 (APU 1) was powered up to supply life to the hydraulic systems that will allow Discovery to transition from her spacecraft phase into that more accustomed to an aircraft, the checkouts were nominal.

All of 38 primary thrusters were pulsed, twice, to check they were also in good working order ahead of their use for Discovery’s dive back towards Earth. Again, no problems were reported.

Thanks to a post undocking water dump, Discovery’s life support systems are all in a nominal condition. The orbiter has plenty of water in stock and – unlike STS-129 – has no problems with her Waste Water System, which blocked during the final part of Atlantis’ mission.